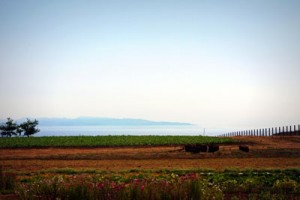 The U.C. Santa Cruz Farm & Garden Apprenticeship changed my life. In the winter of 2005, I was burning the candle at both ends and burning myself out. I was working too hard, moving too fast, and my doctor had warned me that I was at risk of chronic fatigue. Then, that spring, I found myself living on an organic farm perched above the waters of Monterey Bay.  Before I moved to the farm, my to-do list as an environmental campaigner had been packed with conference calls, protest organizing, and press conferences. After arriving at the farm, my biggest priorities became keeping the onions free of weeds, thinning the young fruits on the apple trees, and waking up early to cook for 35 other aspiring farmers.

The switch blew my mind. As I worked in the fields and the orchards I could suddenly see the myriad interconnections that knit together a farming ecosystem; ecology went from an abstraction to a visceral reality. Perhaps more important, living with a few dozen other industrial society dissidents gave me a new appreciation for the ideals of solidarity and the practice of community. The time I spent at the UCSC Farm & Garden deepened my hope that farming, done right, could help heal a battered environment and perhaps even remedy some of the world’s injustices.

So I was horrified when I learned last month that, due in part to state and federal budget cutbacks, the Apprenticeship in Ecological Horticulture (as it’s formally called) may be forced to double its tuition—a move that would put this invaluable program beyond the reach of many people and set back efforts to educate a new generation of organic farmers.

Founded in 1967 by an eccentric British gardener named Alan Chadwick, the Farm & Garden Apprenticeship is the oldest organic farming education program in the United States. It is one of the few organic farming apprenticeships that combines in-the-fields, hand-on instruction with science-based classroom lectures and also one of the few that provides a certificate upon course completion. Demand for this unique curriculum far outstrips what the Apprenticeship can supply: For the 2011 season the apprenticeship received more than 150 applications for 36 openings.

The Apprenticeship is like a greenhouse for the organic farming movement, a place that (if you’ll excuse the extended metaphor) helps germinate crop after crop of passionate farmers and gardeners. Here in Northern California, the names at the farmers market stands and on the menus of farm-to-table restaurants are like a Who’s Who of Apprenticeship alumni: Dirty Girl Produce, Blue Heron Farm, Freewheelin Farm, Dinner Bell Farm, Pie Ranch, Blue House Farm, and the organic nursery Sunnyside Seedlings are all run by alums. And the ripple effect stretches far beyond California.

In New York City, alum Karen Washington is an instructor at the Farm School NYC. In Missoula, Montana, alum Josh Slotnick runs the innovative PEAS Farm, which combines a stellar CSA with agricultural education for University of Montana undergrads. Jones Valley Farm in Birmingham, Alabama is run by an Apprenticehip alum, as is Persephone Farm in Washington and Full Sun Farm outside of Ashville, North Carolina. For my part, I doubt that I would have the confidence to co-manage San Francisco’s three-acre Alemany Farm were it not for the instruction I received at the Farm & Garden.

Now, the austerity measures sweeping the country are jeopardizing the apprenticeship’s ability to continue its important work.

After a while, the budget battles and debt talks in Washington can come to seem like capital clownery. As a committed progressive, I understand that the debt crisis has been manufactured; the country isn’t “broke” so much as it’s been impoverished by a class of people who have resisted paying their fare share in taxes. Still, even a political junkie like me can start to zone out: The details dissolve into abstractions, and from there into absurdities. But with the announcement of the Farm & Garden tuition increase, I saw the government austerity measures threaten something I intimately care about. And now I’m pissed off.

What’s especially galling about the impending tuition increases is that the Farm & Garden Apprenticeship itself is fiscally solvent and has been for many years. It is suffering now because of how fiscal cutbacks have cascaded down from the federal government, the state government, and the broader University of California system to this one little (but highly effective) program.

The financial details of interlocking institutions are confusing, but here’s the story in brief: The Farm & Garden Apprenticeship is technically housed within the Center for Agroecology and Sustainable Food Systems (CASFS), a research group within UCSC that was founded in 1997. In the last year, the center has lost more than half of its state funding ($167,000), as well as a $335,000 annual U.S. Department of Agriculture grant. To make up for the shortfall, CASFS staff has had to dip into the Apprenticeship coffers. At the same time, the entire UC system is in belt-tightening mode and looking to reduce costs or increase revenues. Suddenly, the Farm & Garden Apprenticeship is being asked to pay more for some of the services it receives from the main UCSC campus.

The upshot? Tuition for the six-month program is expected to increase from $5,300 this year to $12,800 in 2013. Next summer, the tuition will technically be $8,500, though apprentices will pay $6,000 thanks to an anonymous donor who gave a special $100,000 gift to blunt the tuition increase. When I was an assistant instructor at the Farm & Garden in 2006, the tuition was $3,250. If the tuition does increase to $12,800, the admission price for this unique farming curriculum will have nearly quadrupled in just seven years.

And that, say longtime Apprenticeship staff, would be disastrous for efforts to educate a diverse group of farmers and gardeners. “Most of the people who go through this program are working adults, so typically they are not the highest wage earners out there,” said Christof Bernau, who has been an Apprenticeship instructor since 1999.

Bernau himself was an apprentice in 1994 and he worries that few people will be able to pay $12,000 for a six-month program that prepares one for a career in farming, hardly the most lucrative profession. “They come to gain more training, and go back out into a field or profession that by and large is not the highest paying,” he said. “They are giving up their jobs, and if they have a family they have to find a way to support their family while here.… It’s a leap and a commitment to come here.”

Big deal, I can hear the bean counters saying, why should the government be supporting farmer education in the first place?  Well, for starters, because the average age of the American farmer is 57-years-old, and the largest cohort of farmers are 65 and older. Within the next decade this country is going to experience a wave of farmer retirements. We desperately need new growers to fill their places, and the Farm & Garden Apprenticeship has a proven track record of giving people the skills they need to become successful organic farmers.

As Bernau points out, the impending tuition increase is yet another example of how government austerity measures fall hardest on an already struggling middle class. If tuition skyrockets to more than $12,000 a summer, the elite will probably still be able to afford the program, and some half dozen of the poorest applicants will still receive scholarships. But everyone else will be turned off by the high prices, bad news for a sustainable food movement already struggling to shed the image of being the exclusive project of the affluent. “If you keep raising tuition, we are going to be pricing people out,” Bernau told me.

I know I couldn’t have done the program at the $12,000 price. I doubt very much that my buddy Matt McCue, who now runs Shooting Star CSA , could have swung that tuition. McCue had finished a combat tour in Iraq before coming to the Apprenticeship and his Army wages wouldn’t have been enough. Same with Robyn “Rose” Hosey, a working class gal from Pennsylvania who now works at Morning Glory Farm, one of the most successful organic farms in Massachusetts. Thinking about the alternate universe in which Hosey or McCue couldn’t have afforded the Apprenticeship is like imagining the agrarian version of “It’s a Wonderful Life”—only in this case the bastard Mr. Potter triumphs and the world is the worse off for it.

The way Bernau sees it, the tuition increase isn’t just a threat to farming education, but is also an assault on the broader principle of public education. “I believe the cost of education cannot and should not be borne entirely on the students’ backs,” he said. “The cost of educating an apprentice is $13,000 per student per year. So the tuition for 2013 is supposed to be $12,800. Even at elite, private universities, the full costs of education are not borne by the students. And certainly at a public institution there is a public role and a public responsibility to bear some of those costs, because the benefits from that education are accrued by all of society.” 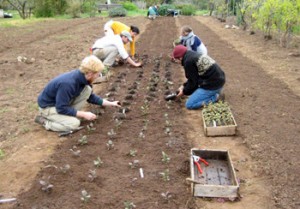 In the case of the Apprenticeship education, the benefit is obvious and tangible: Real food, grown by people with a commitment to environmental stewardship and social justice. For more than 40 years, Apprenticeship alumni have been at the forefront of the movement to create sustainable food systems. Surely that’s a public good, one that deserves to be supported by the public purse.

Click here to make a donation to support the farmer education at UCSC.