Securing A Food Future In Cities: A Case Study In Repurposing Military Bases 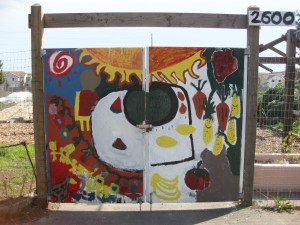 The Alameda Point Collaborative Urban Farm is a one-acre farm growing a variety of fruits, vegetables, herbs, eggs, honey, and–with the introduction of new aquaculture ponds–will soon offer fish as well. Neat rows of plants are surrounded by olive and stone fruit orchards, but beyond this farm, towering cranes are positioned on the horizon. This farm is in a unique location.

The Naval Air Station at Alameda was founded in 1927 when wetlands were filled on the tip of this island in the San Francisco Bay to build runways for military planes. As a naval port, the base was most active during World War II and later during the Cold War. In 1997 the station was closed, as part of the fourth round of closures under the Base Realignment and Closure Act. But the closing of a military installation is often seen as a development opportunity in urban areas, as it opens up land for growth and expansion within city limits.

In the case of the Alameda Station, 1,734 acres became available for other uses. At least three other former military lands are slated for redevelopment in the San Francisco Bay Area, including Mare Island, the Presidio, and Treasure Island–most in some form of combined mixed-use, housing, and open space plans. Typically, some portion of the land is also set aside for use by government agencies and non-profits as a “public benefit conveyance.” One such public benefit, a portion of the former Alameda base is used by the Alameda Point Collaborative (APC), a “supportive housing community” that provides homes, job training, and other services to formerly homeless families.

The APC Farm grew out of a food community assessment that found widespread difficulty in obtaining nutritious and fresh food due to availability and cost. The community was stranded in a food desert. In 2008, following these findings, the farm was created to provide produce for the residents and to educate youth and community members on the benefits of healthy eating. The APC Farm now offers a CSA-style weekly produce delivery service and sells at a farm stand and to local restaurants, and produce from the farm also serves the community kitchen. The farm’s focus on education was nationally recognized in late August, as members of the Growing Youth program traveled to Philadelphia to help draft the Youth Food Bill of Rights at the Rooted in Community Conference.

The APC Farm is an example of the public benefit communities can reap from former military lands, one that addresses multiple levels of the urban food system, including food security and food deserts. In urban areas, lack of available land restricts potential for growing food. But base closings free up large swaths of land which can be used for farming. In fact, the very scale of lands available in these former bases indicate the possibility for much larger, more ambitious farming projects.

Areas around a former base are often economically depressed, having weathered a sudden loss of population and jobs. They are also poorly served by grocery stores and public transportation. By bringing productive landscapes to the base (and setting up market stands and CSAs, too), the neighborhood is served with a fresh, nutritious food source. 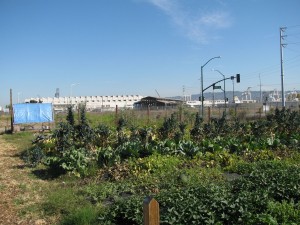 So why don’t we see more proposals for farms on former bases? One major constraint is contamination issues: Military bases are often highly polluted from former operations at the base, and many are Superfund sites.

In the case of the APC Farm, the farm is located on a former playground, which means the risks of contamination are low (soil was tested to confirm lack of contamination before the farm was cultivated). Depending on the past uses of a base, there can be many low-risk areas suitable for agricultural uses, including buffer areas at the base edges, former housing and administration areas, or undeveloped areas. In most cases, soil health has to be rebuilt and soil testing must be performed.

Communities will emerge around land that can support a population. If we consider the option of repurposing natural landscapes, integrating agriculture as a core element, then we can grow new types of neighborhoods and marketplaces which are strong enough to provide for local populations and the city beyond their borders.

Ellen Burke is a landscape architect and writer in San Francisco, where she focuses on creating and preserving farmland in our built environment. She blogs at Grow City. Her writing also appears in the essay collection 'On Farming', and as the Urban Agriculture Advocate at her design firm SWA Group. Read more >