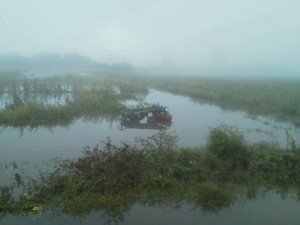 Many New York State farms have experienced devastating losses in the wake of Hurricane Irene. Wind and subsequent flash floods destroyed late summer crops and vegetables, while others have reported drowned cows and washed away barns. Many more farms are without power and, because of washed out roads, countless more do not have a means to distribute their milk.

The flood is particularly brutal because it comes at the height of harvest, which means it is not only a financial disaster, but also an emotional blow. In addition to losing direct sales through farmers‘ markets and grocery stores, Community Supported Agriculture (CSA) members might not receive further produce for months, since waterlogged produce is illegal to sell.

“Community Supported Agriculture is a partnership,” wrote Just Food’s CSA coordinator Paula Lukats in a recent newsletter. She added that investing in a CSA implies that you are taking a risk with the farmer, though Irene presents the most extreme example of what could happen. “No matter how skilled a farmer is, no matter how hard she works, no matter how hard he’s planned, there was nothing they could’ve done to prevent the severe flooding.”

Lucky Dog Farm in Hamden, New York, an organic vegetable operation that provides a local CSA and has a wholesale vegetable business, lost most of it’s summer vegetables. Scenes of waterlogged vegetable fields seem to be found all over the state, with the Schoharie, Mohawk, and Hudson Valley all experiencing extensive damage, along with the Catskills and Long Island. The black dirt area in Orange County, a region prized for onions and vegetable cultivation, sustained significant losses. “The whole region is under water and most of the harvest destroyed,” said farmer Cheryl Rogowski. “We need to get the word out, this region needs help.”

“There is widespread damage to the best cropland along river valleys in the Catskills and Hudson Valley,” said farmer Ken Jaffe, from Meredith, New York, who was quoted in a Village Voice piece about the impact the flooding has had on upstate New York. “Transportation is under lockdown in most Catskill counties, and will be slowed indefinitely by numerous bridges that have been washed out, and roads that are literally gone. There are major losses to farmers who are literally underwater, and often under evacuation.”

The Schoharie and Mohawk valleys were hit hard by flash floods, where there were reports of drowned cows and destroyed barns. Unfortunately, confirmed reports are scarce because of the nature of the disaster–many are with out power and have limited access to open roadways. Darrel J. Aubertine, the commissioner of the state’s Department of Agriculture and Markets, told the New York Times, “Clearly, it’s not good. I’ve been involved in agriculture my entire life, and there have been times when the weather has wreaked havoc on livestock and farms, but I don’t think I have ever seen anything on this scale here in New York.”

The fact that so many vegetable and dairy farmers have been washed out by the storm speaks to the unique topography of New York, which is an important vegetable growing state. Schoharie County farmer and author Shannon Hayes explained in a recent blog post that the best soil for vegetable crops is generally located in floodplains. She also wrote about what the loss means for farmers’ businesses. “Vegetable producers around here make most of their annual income from July through October,” she wrote. “In addition to the incredible damage to their homes, they’ve also just lost half the year’s income, and an unfathomable amount of topsoil and accumulated fertility.”

The timing of the flood makes this particularly hard for dairy farmers, since the winter depends on a successful summer harvest of hay, corn, and alfalfa. The Albany Times Union reported on the devastating effects at one farm: “The water flattened a corn field, ruining $500,000 worth of feed for the farm’s 375 cows.” There have also been reports of barn fires because of wet hay.

The New York Farm Bureau has been compiling damage reports across the state and working with state and federal agencies with disaster designations. They also confirmed that many animals have been lost and barns destroyed.

Challey Comer, the Farm to Market Manager at the Watershed Agricultural Council, is helping to coordinate efforts to help farmers in the watershed area. “We have people going out to farms to access the impact the storm and flooding has had and to help farmers connect to available funding,” she said. She noted that the local extension agents are armed with information to help farmers with flood related issues, like what to do with water logged hay and damaged crops. She also compiled a list of resources and fundraising activities to help area farms.