By Gail Wadsworth and Don Villarejo 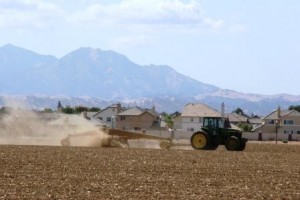 When we think of “the rural,” California may not come to mind, though it’s estimated that 80 percent of the land area in California is rural.

Now the lines between urban and rural there are blurring. California faces an unusual challenge: productive agricultural regions are growing cities in addition to fruits, vegetables and grains. This is causing a change in federal classification which makes it harder for truly rural areas to get needed government funding.

California’s counties are vast–San Bernardino County, for example, stretches over 20,000 square miles–that’s larger than nine states. But if you spread the population of San Bernardino County over the area equally, the population density would be sparse at about 100 people per square mile. However, because there are cities in the county with more than 50,000 inhabitants, the county as a whole is designated metropolitan.

The change to metropolitan status has on-the-ground repercussions. For California health agencies and non-profits, for example, this redefining of rural areas has resulted in the inability to apply for funding that is channeled to rural regions. This, in turn, results in the decline of public health services, rural development and food access for rural residents. Much of rural California is now more populous, more Hispanic, but less healthy, poorer and less well educated than urban areas. The conclusion is inescapable: the divide between California’s rich and poor is becoming ever wider.

There is no universally accepted definition of “rural.” In fact, there are over 15 definitions in use in federal agencies. In most instances, the term “rural” is a catch-all applied to any region that is “not urban.”  With changes in the definition of rural by the Census Bureau and the development of Rural-Urban Continuum Codes, just four California counties are officially classified as rural (Alpine, Mariposa, Sierra, Trinity).

More than 98 percent of the state’s rural residents live in counties described as “metro” or as “non-metro”. Huron, Mendota, Mecca, Orange Cove, Parlier and Arbuckle, among many others, have populations that exceed the 2,500 cutoff to be classified as rural. But nearly every resident of these communities will say they live in a rural community. Reviewing the census data, we discovered that less than two percent of California’s rural population resides in the four counties specifically identified as rural.

There are two basic explanations for this demographic shift. One is spillover from urban regions by people seeking less expensive housing, lower crime rates, a higher quality of life, more space and the rural lifestyle. The second shift is the emergence of Hispanic majorities in large portions of the San Joaquin Valley. Residents have migrated into these agricultural regions from Mexico and Central America drawn by the prospects of employment, higher wages and a better life for themselves and their children.

Rural California differs from rural areas in the midwest because almost half of all the country’s fruits, vegetables and nuts are produced there. Nine of the top ten agricultural producing counties are in California. California produces more milk for the U.S. than any other state including Wisconsin, America’s Dairyland. And this production occurs on small family farms–the average farm size in California is 100 acres less than the U.S. average farm size and 75 percent of California farms are smaller than 100 acres. Seventy-nine percent of all California farms are owner operated and are family owned.

Like other rural areas, rural California faces the specter of climate change and the impacts that may have on our farms and the people who work them. High unemployment and foreclosure rates have disproportionately impacted rural cities and towns. Farmers and their employees can’t afford health care and yet, they have one of the most dangerous jobs in America. Food insecurity in farming regions is among the highest in the country and this level is even higher for farm laborers. The people who work to grow food for the world don’t have enough to eat and what they can afford is unhealthy. In Fresno County, the most productive agricultural county in the nation, about 40 percent of the residents experience poverty and hunger.

The measures used to rank congressional districts were: life expectancy at birth, educational attainment, school enrollment (as percent of eligible children) and median earnings. In this district, a plurality of all private sector male workers is employed in agriculture. And yet the 20th Congressional District, in a county now categorized as metropolitan, is a major success story of agricultural production. According to the 2007 Census of Agriculture, the district ranked 14th in the nation in total farm cash receipts with $4.4 billion, and 2nd overall in vegetable sales.

A county-based definition of “rural” does not work in California. Financial stresses on rural systems are largely a manifestation of federal policy–rural regions are not homogeneous and policies to address rural challenges need to be flexible. It’s time for the federal government to change the way it invests in rural America.

Dr. Don Villarejo is founder and Director Emeritus of the California Institute for Rural Studies. In 2007-08, he served on the National Academy of Sciences expert committee to review the occupational safety research programs of NIOSH in the areas of Agriculture, Forestry & Fishing. During 2009, he served on the USDA expert panel to review the agency’s programs in Sustainable Agriculture and Farm Management. In 2010, he served on a National Academy of Sciences expert panel to assist the Government Accountability Office review of the USDA 514/516 farmworker housing assistance program. Gail Wadsworth is the Executive Director of the California Institute for Rural Studies. Before coming to CIRS in 2009, she was Deputy Director of the Farmer Veteran Coalition. Gail has worked in industry, government, academic and non-profit sectors. Since 2000 she has been an independent consultant to non-profits, farmers, consumers, educators, and wholesalers concerned with funding, alternatives to the current food system, environmental issues and social awareness.  Read more >