California Ignores Its Own Scientists on Dangerous Pesticide | Civil Eats

California Ignores Its Own Scientists on Dangerous Pesticide 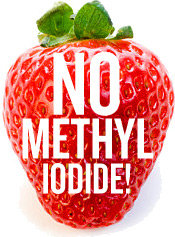 Applying* a cancer-causing poison on California’s farm fields sounds like some dastardly plot hatched by a Batman super-villain. Unfortunately, reality is often scarier than fiction. In December 2010, the State of California approved the known carcinogen methyl iodide for use on the state’s farm fields. Yes, you read that right—a chemical that actually causes cancer was approved to be applied* on the fields that grow the Golden State’s most prized crops.

Earthjustice promptly filed a lawsuit in January challenging the state’s approval of the toxic pesticide. As a result of the lawsuit, Earthjustice recently obtained internal documents detailing dire warnings about methyl iodide from scientists at the California Department of Pesticide Regulation. Unfortunately, those dire warnings fell on deaf ears and then-governor Arnold Schwarzenegger approved methyl iodide for use.

“These smoking gun memos show that state officials cherry-picked calculations to support their preferred outcome of approving methyl iodide instead of letting science guide their decision-making,” said Susan Kegley, PhD, Consulting Scientist with Pesticide Action Network North America. “Ignoring the science and prioritizing the needs of the manufacturer has put the health and safety of Californians at great risk.”

Methyl iodide, produced by the agri-chemical concern Arysta LifeSciences, is a highly toxic pesticide that kills weeds, insects, nematodes, soil borne pathogens, and basically anything else that lives below ground. The chemical is most threatening to the men and women who work in California’s strawberry fields where the majority of the pesticide will be applied. Those farm workers risk eye irritation, nausea, central nervous system disorders, late-term miscarriages, and the aforementioned cancer.

“I’m mad that the Department of Pesticide Regulation, which is supposed to protect us from pesticides, was hijacked by a pesticide company,” said plaintiff Jose Hidalgo. “As a strawberry picker, we frequently see pesticide tarps blowing in the wind and experience the pain of pesticide exposure.”

State experts weren’t alone in warning about the dangers of widespread use of the cancer causing poison. Fifty eminent scientists, including six Nobel Laureates in Chemistry, said methyl iodide is one of the more toxic chemicals used in manufacturing. California’s own Scientific Review Committee agreed. Dr. John Froines, chair of the Committee, told the press: “I honestly think that this chemical will cause disease and illness. And so does everyone else on the committee.”

Earthjustice’s lawsuit claims that the state’s approval of methyl iodide violated the California Environmental Quality Act, the California Birth Defects Prevention Act, and the Pesticide Contamination Prevention Act. The suit also contends that the state failed to involve the Office of Environmental Health Hazard Assessment in the development of farmworker safety regulations. Failing a settlement, the case could be heard as early as January 2012.

David Lawlor is the Development Writer for Earthjustice, the largest nonprofit environmental law firm in the world. Lawlor graduated with a B.A. in Journalism from San Francisco State University and earned his M.A. in Social Science with an emphasis in environmental issues from Humboldt State University in Arcata, California. He has worked as a writer and editor for various newspapers, magazines, and Web sites. Read more >