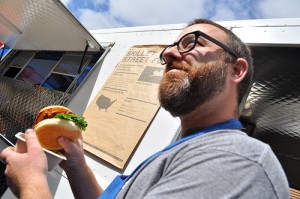 “For folks who have cooked their whole lives, taking business into their own hands with their family by their sides, is a huge risk. But it provides potentially huge freedom,” said Caleb Zigas, director of San Francisco’s La Cocina culinary incubator summarizing the second National Street Food Conference at Fort Mason in San Francisco.

The conference, held August 21-22, united street food entrepreneurs and mobile vending policy makers from around the country to share experiences and insights around trends, marketing, and money. Conversations about freedom, daring, and risk wove throughout each session.

“There’s a transition from street food being something you had to seek out,” said Zigas. “In a lot of ways it’s a trend and vendors are easier to find. Now they’re ‘cartepreneurs.” Communications and urban planning consultant Lizzy Caston said, “Street food changes lives.” With a pulse on the Portland and New Orleans food truck scenes, she observed, “It’s integral to communities and keeping people in the black. Allowing trucks is an efficient way for cities to put economic development funds to work.”

With start-up expenses in the many thousands in San Francisco (that’s just for city application fees) and differing laws per city and per county (making the business expansion Orwellian), the launch into street food can be onerous. Getting permitted is often the major challenge of starting up. “What we’re seeing in cities today reflects the way things used to be,” said author Robb Walsh. He pointed out it was Upton Sinclair’s book The Jungle that generated an outcry about sanitation, leading to “a huge wave of legislation that put into effect the health codes that began to regulate street food between 1907-1910.”

Particularly for struggling immigrants, going legit is goal number one. Maria de la Luz Vazquez of Chaac Mool and Lucero Munoz Arrellano of Lucero’s Bacon-Wrapped Hot Dogs experienced freedom in getting permitted, with guidance from La Cocina. They strive to educate those vending via strollers on street in San Francisco’s Mission District on the ease and thrill of overcoming the fear of being busted by the cops by operating with permits.

Gail Lillian’s frustration filled the room as we experienced her journey calling precinct after precinct to confirm her chosen Liba Falafel locations would comply, only to learn that street vending rules are less clear than a cup of horchata. The last straw? Hearing she could not land a location due to competitor proximity. She now focuses more on East Bay locations rather than San Francisco, as that area attempts to become more mobile business-friendly.

“I think the family business model is very effective for lower income families,” said Zigas.  “My perception of a lot of the new wave is they are ‘creative class refugees’ who are entering this space because their jobs no longer exist. Compared to a job making $80-100K and now you’re diving in to manage a food truck, it’s going to be difficult to make even $50K. How long will those people last?”

Answers arose in a panel moderated by Baylen Linnekin, a long-time street food advocate who runs Keep Food Legal, in Washington, D.C. “We were born out of necessity,” said Lisa Wood of Portland food truck Big Ass Sandwiches, as her career in radio and music faded away.  They took nine months to get everything together. “We knew the food cost in detail before we made anything or went forward,” said her husband and chef Brian, “Yet it was trial by fire, despite the planning, serving 70 customers on day one.”

Every entrepreneur, whether “creative class” or not, echoed that running a street food operation is not “easy” or “fun” but a 12+ hour a day proposition. Interestingly, successful vendors follow similar practices common to principles for “good business:”

The group railed against Deal of the Day services, of which Big Ass Sandwiches had a catastrophic experience. “Everything you sell should make money. There’s no such thing as a loss leader. Make money every time,” said Henderson.

Is Street Food Here to Stay?

“There is a need for street food, not only where good, fast food can fill a food desert void, as in New Orleans,” said Caston. Street food also creates an “eyes on the street” effect, helping reduce crime in areas that might otherwise be sparsely populated.

Walsh observed that restaurant sanitation laws ironically drove a boom in Texas barbecue trucks. “The health departments want grease traps and things that don’t make sense,” he said. He finds many “now putting BBQ pits in the mobile food trucks,” essentially saving old-fashioned, wood barbecues. It is also a return to the past, much like urban farming, Caston pointed out.

Is street food is indeed a trend? All agreed on why it is so popular–the direct contact with owner/chefs, the ability to see food being made, the communal experience, and often amazing food. I’ve been to many brick-and-mortar restaurants that provide this experience, with communal tables, high traffic locations, a buzz (often loud), and food for which people line up. Great customer experience is the key to business success.