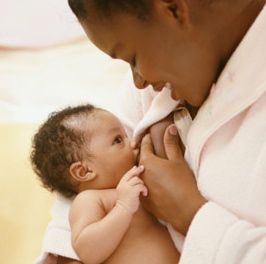 I’ve got a problem with the food system conversation in the U.S.  It neglects to include what I call the “first food”—breast milk—and emphasize the critical importance of breastfeeding. No conversation about equitable food systems can truly exist without including the first food and understanding how the racial and social inequities around breastfeeding adversely affect vulnerable populations.

If access to healthy food is a basic human right then doesn’t that right start at birth? Shouldn’t our smallest and most vulnerable citizens have fair and just access to the healthiest food for them?

Consider the facts: For the past 30 years, breastfeeding rates among black women, particularly those in underserved, food desert communities, have been significantly lower than all other ethnicities. In the U.S., African American infants are more than twice as likely to die before their first birthday than other infants. In some cities, the stats are even more sobering: Memphis, Tennessee ranks at the top of the list for infant deaths in American cities—where a baby dies every 43 hours.

A recent study [NS1] concluded that increasing breastfeeding rates alone could help close this racial gap across the board.  The many health benefits of breastfeeding, including an improved immune system and fewer ear and respiratory infections would address some of the leading causes of infant death in low-income communities.

In addition, several studies, including one by researchers at the University of Copenhagen show that breastfed infants are more likely to try new foods later in life. Because breast milk contains flavors from foods eaten by mothers, breastfed infants are exposed to a variety of tastes early in life. In contrast, artificial baby milk (formula) always tastes the same. These nuances are simple yet powerful steps that can lead to a greater likelihood for more varied and healthier food choices as an older child.

Given these sobering facts, it is hard to argue against the fact that by removing the barriers to access to the first food we can have a tremendous impact on infant nutrition and maternal health. And it is equally hard to understand why the food movement isn’t talking more about breastfeeding.

Instead, far too many babies are born into “first food” deserts, communities with limited breastfeeding resources and support.  The reasons why more African American women aren’t relying on the first food for their newborns are a multifaceted mosaic—ripe with politically nuances, deep racial undertones, social taboos, and complex cultural subtleties—similar to many other areas of the food systems work.

Some of the barriers may be related to historical trauma. During slavery, slave owners used and purchased black women as wet nurses for their own children, often forcing these mothers to stop nursing their own infants to care for others.

“On the one hand, wet nursing claimed the benefits of breastfeeding for the offspring of white masters while denying or limiting those health advantages to slave infants. On the other hand, wet nursing required slave mothers to transfer to white offspring the nurturing and affection they should have been able to allocate to their own children,” writes historian Wilma A. Dunaway, in the book The African American Family in Slavery and Emancipation.  And since breastfeeding reduces fertility, slave owners forced black women to stop breastfeeding early so that they could continue breeding, often to the health detriment of their own infants, Dunaway writes.

Although African American women had a stunted and complex breastfeeding experience at the hands of slave owners hundreds of years ago, that may still linger culturally today. Perhaps an unconscious legacy of thinking that breastfeeding is something we did for others and not for ourselves.

Then there’s something I call the National Geographic factor—that is, most of the images we see of black women breastfeeding are semi-naked women in Africa whose lives seem so far away from our modern, African American lifestyle and experience.

A lack of culturally competent breastfeeding resources in our communities also play a part.

Whatever the root causes, the correlative impact is clear: A woman is more likely to eat nutritious food when breastfeeding. Conversely, when a woman lives in a food desert and knows her diet is not and cannot easily be healthy, nutritious and affordable, she is less likely to breastfeed.

Our destinies are inextricably linked.

By breaking downs the racial and social barriers to the first food, we can give more infants a healthier and more equitable start in life; make the first food, fair food and improve the health of their mothers, too.

That would be true justice for all.

Kimberly Seals Allers is an IATP Food and Community Fellow and a leading voice on the African American motherhood experience. She is the author of The Mocha Manual to a Fabulous Pregnancy (Amistad/HarperCollins) and two other Mocha Manual™ books and founder of www.MochaManual.com, a parenting and lifestyle magazine and blog for African American moms. Read more >