Nikki Henderson: On the Frontlines of Edible Education | Civil Eats

Nikki Henderson: On the Frontlines of Edible Education 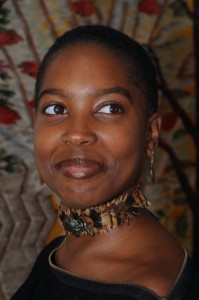 People seem to have an insatiable appetite for food matters right now. Case in point: the public tickets for Edible Education 101 at UC Berkeley were snapped up in 12 minutes on Monday, according to a tweet from Alice Waters, who played a key role in bringing the curriculum to the university.

The 13-week course, co-taught by J-school professor and The Omnivore’s Dilemma author Michael Pollan, and Nikki Henderson, the executive director of People’s Grocery, a food justice organization in West Oakland, will examine the rise and future of the food movement. Student enrollment for the one-semester course also filled within minutes after it was listed online, as Berkeleyside reported earlier this month.

Why such interest? The class offers undergrads, grad students, and regular folk a chance to critique current food systems and dissect food politics with Pollan, Henderson, and Waters, as well as a slew of other big names in the food movement, including Marion Nestle and Eric Schlosser. The course kicks off with a lecture by Slow Food founder Carlo Petrini on August 30th. The class also coincides with the 40th anniversary celebration of Chez Panisse restaurant.

“UC Berkeley is my alma mater so I feel a real connection to the institution,” Waters explained to Berkeleyside earlier this week. “The opportunity arose to develop this course and we pulled this program together quickly. We also wanted to show our support for the university and public education.” Waters’ Chez Panisse Foundation (soon to be renamed The Edible Schoolyard Project) is footing the bill for the fall semester course to the tune of $30,000.

“I hope that students will have a stronger grasp of the concept that what we eat has consequences for our health, culture, and the environment,” Waters said, adding that she hopes that the course will continue beyond the fall.

If Waters is the iconic idealist and Pollan the affable academic, Henderson is the unapologetic activist. She’s also young (26), African-American, and spends her work days at a non-profit devoted to dealing with food security issues for low-income people of color.

Prior to coming to People’s Grocery 18 months ago, she worked for Slow Food USA and Green for All, the environmental organization co-founded by Van Jones. Not surprisingly, Henderson, who grew up with seven older foster brothers and two blood brothers in L.A., brings a different perspective and sensibility to the Berkeley bourgeois food scene.

Berkeleyside recently met Henderson for lunch — in Oakland — to learn more about why she decided to come to the table with Waters and Pollan. 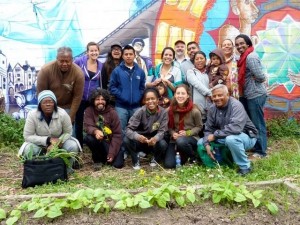 How did your involvement with this course come about?

Well, the Chez Panisse Foundation came to me and asked me if I’d be interested in doing it. This class was important to me because it’s an opportunity to have a real exploration of the issues of race, power, class, and privilege in relation to food, which is something we do every day at People’s Grocery. When Chez Panisse approached me I told them I was only interested in teaching the course if we hit those bases and a good third of the curriculum does that.

It was also important for me that people speak for themselves. The whole class could have been taught by people who have written books about other people’s experiences. But we’ll have practitioners like the Coalition of Immokalee Workers (immigrant farm workers who have brought about historic changes for tomato farmers in Florida), for instance, who will come and tell their stories themselves. It’s important for the students to experience that, because one of the dynamics of not having privilege is that you don’t get to tell your own story. Those with means and access get to spend their time telling your story.

I wanted to ground the syllabus in the struggle for food justice and food security. There wouldn’t need to be a movement if there weren’t deep injustices happening and divisions within the movement. This college course explores the complexity of these issues within the context of the food movement.

How involved have Waters and Pollan been in shaping the curriculum?

Alice Waters really laid the groundwork for this to happen and her message is so consistent that you know what she’s going to say, so she just sort of gave me her marching orders and made a lot of suggestions, but then she just leaves it in your hands.

Michael wanted to make sure that the course was academically rigorous and that it involved deep, critical thought. He wanted the mix of practitioners and academics. He didn’t want it to be just a good conversation about the food movement but that there was a component that explored the complex question: what is there to do now?

They both made it clear since the beginning that they wanted me to feel it was very much my course too. And they’ve been generous with their time and expertise. Michael has been coaching me through putting the lecture series together. One piece of advice he gave me: don’t have the same format every week or people will fall asleep.

Can you tell us a little about your personal connection to food?

We grew up eating very healthy food. We ate home-cooked meals that consistently included a grain, a protein, and a vegetable, usually something like brown rice, baked chicken, and steamed broccoli. My mom was a kind of ’70s hippie, though I don’t think she’d classify herself as such. She is vegetarian and has a deep interest in health and nutrition, and she passed on those good habits to her children.

My great aunt and uncle were diabetic amputees. My aunt has the disease and my grandfather, who is no longer alive, almost lost his feet to the condition. With this exposure to diet-related diseases it hit me early on: what you eat is not something to play with.

What can young people interested in the food movement learn from those who have worked on this cause for decades?

There’s a lot of context that younger people need, of what’s actually happened so far in the food movement, like the current middle-class mainstream food movement is very much centered in an older struggle for food security and it’s important to have that context. You need to be grounded in the history. I’ve only been in the food movement the past three or four years and I’m well aware of how much there is to learn about what’s happened historically, so we in this younger generation can be truly effective in bringing about change. I want to soak up every bit of that in this course.

Is this the right time for this class?

It should have happened two years ago because the window of opportunity is closing. The mass media switches from one thing to the next pretty quickly and food has been hot for the last two years and it’s probably only going to be hot for another year or two and then it’s going to fade into the background. I’m going to do everything I can to move some things along while I can.