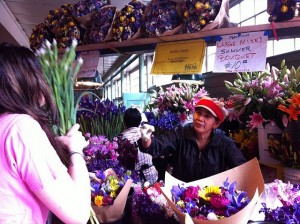 Seattle is where Asian America intersects with food and environmental justice, as I discovered when I spoke there recently as part of a “Sustainable Growth Summit” convened by the White House Initiative on Asian Americans and Pacific Islanders. Seattle embodies the diversity, contradictions and great talent that define our Asian American and Pacific Islander (AAPI) community: wealth and poverty, hunger and abundance, access or exclusion based on citizenship and English language proficiency.

Thus it made sense that the event was held at North Seattle Community College, which recently received Federal designation as an Asian American and Native American Pacific Islander Serving Institution. Many don’t know that the largest sector of AAPI college enrollment (47 percent) is at community colleges; NSCC President Mark Mitsui began the day describing their college’s new sustainability efforts (including cafeteria composting) and reminding visitors to count community colleges as key partners in building the so-called “green economy.”

I led a panel on “Local Foods for Economic Development,” and it attracted a diverse and opinionated mix of students, farmers, activists and one food-justice bookseller. WHIAAPI Commissioner Kamuela Enos is the director of education programs at Ma’o Organic Farms in Oahu, Hawaii and a rising star of the AAPI sustainable agriculture movement. The program he works with trains community college students in organic farming and wholesale and retail sales, with an emphasis on traditional crops and indigenous farming techniques. Wearing cheery shirts with the company motto “No Panic, Go Organic!” students learn how to sell high-quality produce through various channels including a local CSA, farmers markets, and to chefs across the Islands. Ma’o is accomplishing all this in an area in Oahu with levels of poverty near 20 percent, with some census tracts exceeding 50 percent.

A more sobering perspective was offered by Washington State Extension Officer Bee Cha, who coordinates their Hmong Outreach Program. While the farmers he works with are experts at fruit, vegetable and flower cultivation, language and cultural barriers have made it difficult for them to achieve financial stability. Hmong farmers enliven Pike Place Market with a stunning cornucopia of flowers, but Bee described their difficulties breaking into the higher-margin wedding and corporate flower market.

Finally, USDA Washington State Business & Cooperative Programs Director Tuana Jones shared some of the tools her office can offer to AAPI farmers and entrepreneurs: assistance setting up a cooperative, grant programs for cold storage and marketing assistance, connections to farmers markets, and more. I used to work with Rural Development (which administers the Business and Cooperative Programs) in Washington, DC and have great respect for their work. Under the Obama administration they’ve made local and regional foods a new priority, and Tuana spoke expertly on their work in that arena.

There is a rich history of AAPIs in farming, fishing, canning and food retail in Seattle, and the day after the Summit I toured the historic Chinatown/International District. We visited Danny Woo Community Garden, a glorious patch of green in the middle of the city managed by Interim CDA, a community development and low-income housing provider. The garden is tended by elderly gardeners and their young apprentices, who celebrate the harvest every year with a free Filipino-style “Pig Roast” in the garden. Seattle is a backyard chicken mecca (city government named 2010 the Year of Urban Agriculture), and the Danny Woo Garden recently expanded their chicken coops and added an affordable “Urban Farm Camp” for local children to learn about chickens, food and agriculture.

Some of the greatest ideas in food justice and sustainability are being born in Seattle’s AAPI communities. I hope the rest of the country takes note, and Seattleites, please let me know what I missed in the comments below.

UPDATE: After this piece was published, I received additional statistics from Bee Cha of Washington State Extension: Roughly 80% of Hmong farmers in the area grow flowers, and out of about 90 Hmong farms in Washington, only 4 farmers own their land. Access to markets is especially important for these hardworking flower growers.

Here’s a link to the immigrant farmers program he works with: