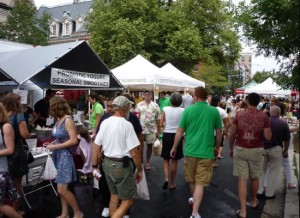 In case you missed the announcement, this week is National Farmers Market Week. No matter. If you shop regularly at one of the more than 7,000 markets across the country, every week is farmers market week. That’s true in my neighborhood, where FreshFarm Markets started the first producer-only farmers market in Washington, D.C., 14 years ago.

When I relocated to D.C. from New York, I had no idea I was moving to a food desert. Although Dupont Circle wasn’t poor by any means, we had limited access to healthy, fresh food. There was one small supermarket we called the “Soviet” Safeway because there were usually long lines and nothing on the shelves. The produce there was pitiful: The tomatoes, picked green and reddened with ethylene gas, could break your teeth.

But that’s not all. Over the last decade, FreshFarm, a nonprofit spun off from American Farmland Trust in 2002, set up 10 other one-day-a-week markets in the region, which collectively attracted more than 350,000 customers last year.

These markets have not only been a boon for area residents hungry for tasty, locally produced food, they provide a lifeline for regional farmers–and create jobs in rural areas. Some 150 family farms in Delaware, Maryland, Pennsylvania, Virginia and West Virginia now sell their goods at one or more of the FreshFarm Markets, and there are now some 40 other farmers markets run by other organizations within 10 miles of Dupont Circle.

Why aren’t these farmers selling their bounty to grocery store chains? “Grocery stores are not set up to buy from small local farmers, they’re worried about adequate supply, and they won’t pay a fair price,” said Bernadine “Bernie” Prince, cofounder of FreshFarm Markets. “Without local farmers markets, local farmers were not making it financially.”

With farmers markets, on the other hand, local family farms are not only making it, they are expanding to meet growing demand.

David Hochheimer and his wife, Emily Zaas, own the 65-acre Black Rock Orchard in Lineboro, Maryland, on the Pennsylvania border. They have been selling mostly tree fruit–apples, pears, peaches, plums and cherries–as well as seasonal vegetables and greenhouse crops at the Dupont Circle market since it began. They also have stands at six other markets in the area.

“Roughly 95 to 100 percent of my revenue comes from farmers markets,” said Hochheimer, who inherited the farm from his father, a research scientist at Johns Hopkins University, who bought it in 1970. “If we didn’t have them, we would be out of business. We would have to do something else.”

Over the years, Hochheimer and Zaas built two greenhouses, enabling them to sell more produce in the spring, and in June they bought a 26-acre farm nearby, which will allow them to increase production.

Another Dupont Circle founding farmer, Mark Toigo, owns the 450-acre Toigo Orchards in Shippensburg, Pennsylvania, northwest of Gettysburg. He sells greenhouse vegetables and apples, peaches, pears and other tree fruit at 18 farmers markets in the D.C. area, which account for 75 percent of his sales. He employs 12 to 60 workers, depending on the time of the year. Last week, 25 people were handling the chores.

“I’ve been able to hire more people over the years directly due to access to farmers markets,” he said. “We now produce, transport and market, and we had to buy trucks, tractors and material handling equipment, and hire retail sales folks.”

Toigo grew up in the D.C. area. His father, an electronics engineer, bought a farm, eventually decided to switch careers, and moved the family out of the city. After college, Toigo, who also studied engineering, couldn’t find a job during the early 1980s recession, so he went to work with his dad. After selling directly to restaurants, they started selling at farmers markets, which have been their bread and butter ever since. “If it weren’t for farmers markets, there is no way our farm would have been multigenerational,” he said. “It would have ended. They are that important to us.”

FreshFarm Markets’ growth mirrors the explosion of farmers markets nationwide. Since the U.S. Department of Agriculture launched National Farmers Market Week in 2000, the number of farmers markets has jumped 150 percent, from 2,863 to 7,175. (To find a farmers market near you, go to the USDA’s Farmers Market Searchdatabase.) Currently more than 100,000 farms sell food directly to local consumers, and in 2007, the last year the USDA checked, direct agricultural product sales grossed $1.2 billion.

This dramatic increase in farmers markets has happened with relatively little support from the federal government. Last year, for example, most of the $13.725 billion Congress allocated in commodity, crop insurance, and supplemental disaster assistance payments went to large industrial farms, according to the Congressional Budget Office. The amount that went to support small family farms? According to USDA data, less than $100 million.

Granted, that money does help. Eli Cook, the owner of Spring Valley Farm and Orchard outside of Romney, West Virginia, was able to buy a 52-acre farm with the help of a low-interest USDA loan for young farmers. He was only 22, and had just graduated from West Virginia University with a degree in agricultural business, but he had been selling vegetables at farmers markets since he was 12. He’s now 31, and over the last nine years he purchased adjoining land to expand his spread to 230 acres, on which he grows tomatoes, peaches, apples, strawberries, cantaloupe, potatoes, broccoli and other produce. Another USDA loan covered 85 percent of the cost of erecting an 8-foot high fence to keep deer out.

Cook currently employs five full-time farm hands, 20 seasonal workers for harvesting, and more than 40 part-time high school and college students who sell his produce at six farmers markets, including the FreshFarm Market at Dupont Circle, and a roadside stand at his farm. About 85 percent of his revenue comes from farmers markets. “Farmers markets is where it started and where it’s at right now,” he said. “Farmers markets can eat up everything that we can grow.”

Likewise, Zachariah Lester and his wife, Georgia O’Neal, were able to buy 50 acres of farmland in Unionville, Virginia, two years ago with the help of a low-interest USDA loan. Previously, they had been leasing land. They also got a USDA loan to restore a barn, buy tractors and tillage equipment, and install passive solar greenhouse-like structures, called high tunnels, so they could grow greens, roots and tomatoes all year long.

“We needed USDA help,” said Lester, whose Tree and Leaf Farm is located about 80 miles south of Washington. He and his wife also need farmers markets. Dupont Circle and a market in Falls Church, Virginia, “are vital to our operation,” he said. “About 85 percent of our sales are at both markets. We would not survive without them. We have extremely dedicated customers.”

Jeffrey O’Hara, an agricultural economist at the Union of Concerned Scientists (UCS), acknowledges the importance of USDA loan programs to small family farms and is enthusiastic about the agency’s “Know Your Farmer, Know Your Food” program promoting local farming, but he says the federal government should be doing a lot more to support local farmers–especially with unemployment running so high. “If the government diverted just a small amount of the massive subsidies it lavishes on industrial agriculture to support farmers markets and small local farmers,” he said, “it would not only improve American diets, it would generate tens of thousands of new jobs.”

Last summer, Agriculture Secretary Tom Vilsack asked Congress to set a goal in the 2012 Farm Bill of helping at least 100,000 Americans to become farmers by, among other things, providing entrepreneurial training and support for farmers markets. Just last week, UCS released a report by O’Hara that takes up Vilsack’s challenge and argues that supporting local and regional food system expansion is central to meeting that goal.

O’Hara’s report, “Market Forces: Creating Jobs through Public Investment in Local and Regional Food Systems,” identifies a number of ways the federal government could encourage new farmers and the growth of farmers markets in the upcoming Farm Bill.

First, Congress should support the development of farmers markets and farm-to-school programs, which can create permanent jobs. For example, O’Hara calculated that the Farmers Market Promotion Program, if reauthorized, could generate as many as 13,500 jobs nationally over a five-year period by providing modest funding for 100 to 500 farmers markets annually.

Second, Congress should level the playing field for small family farms in rural areas by supporting investment in infrastructure, such as meat-processing or dairy-bottling facilities, which would help them produce and market their products to consumers more efficiently. Those investments would foster competition, provide more choices for consumers, and create jobs in rural areas that have been hit hard by the recession.

Finally, federal and state governments should allow farmers markets to accept food nutrition subsidies to enable low-income Americans to purchase fresh fruits and vegetables. Currently, only about 12 percent of the farmers markets across the country have the capability of accepting Supplemental Nutrition Assistance Program (SNAP) benefits on site.

“The farmers supplying these local markets are innovative entrepreneurs, and we should nurture them,” said O’Hara. “Supporting them should be a national priority.”

Elliott Negin, the media director at the Union of Concerned Scientists, was a foreign news editor at National Public Radio, the managing editor of American Journalism Review, and the editor of Nuclear Times and Public Citizen magazines. Read more >