Fighting For Flavor: Two New Additions to the Ark of Taste | Civil Eats

Fighting For Flavor: Two New Additions to the Ark of Taste 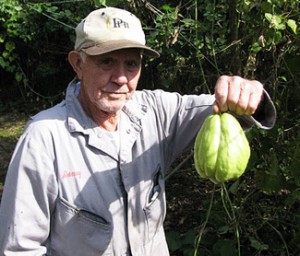 By keeping the size, colors, and flavors of foods consistent, large-scale producers are elbowing out the fragile, juicy, and region-specific foods that used to make our fields and plates exciting. The U.S. Ark of Taste, a program of Slow Food USA, seeks to reverse this trend. The Ark is a growing list of foods that are flavorful, culturally rooted, and at risk of extinction. Slow Food members from around the country nominate foods to the Ark and mobilize volunteers to keep them in production.

Why is food diversity important? For one, interesting new flavors can entice even the pickiest of eaters to try more fruits and veggies. On an environmental scale, ecosystems thrive when they include a diversity of organisms. And while some genetic adaptations might not have immediately apparent benefits, preserving a deep gene pool is critical for long-term food security.

But what can everyday people do to preserve diversity in the food chain? Here are the stories of the two newest foods on the U.S. Ark of Taste, and the committed volunteers who wouldn’t stand idly by while biodiversity around them dwindled. The fact that they’re both from the South is pure coincidence, but not entirely surprising given that region’s continued interest in food culture.

The natural and man-made disasters that wreaked havoc along the Gulf Coast in recent years have also threatened the rich culture of growing and cooking traditional foods.

Take the traditional Louisiana mirliton for example. Introduced to the Gulf during the 1804 Slave Revolt in Haiti, the mirliton (a squash-like vegetable also called chayote) became a key ingredient in Creole and Cajun cuisine. Meanwhile, a range of heirloom varieties developed in backyards and abandoned lots. 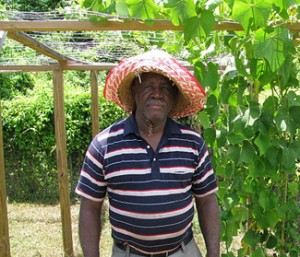 Commercially hybridized chayotes pale in comparison to their locally-bred counterparts, both in terms of flavor and adaptation to the Gulf microclimate. Nonetheless  they were cheap and easy to find at stores like Wal-Mart, so they had begun dominating the local market even before the floods. After Hurricanes Rita and Katrina, however, many vines were drowned or went untended; the exodus of residents made propagation of heirloom varieties less common. Eventually, some mirliton fans tried to plant store-bought Costa Rican seeds, but many of the vegetables—adapted to mile-high altitude—didn’t take root in New Orleans.

Enter the Adopt-A-Mirliton project, a partner of the New Orleans Crescent City Farmers Market. Founded by Dr. Lance Hill, Executive Director of the Southern Institute for Education and Research at Tulane University, in 2008, the project has identified dozens of threatened landraces, propagated them, and made them available at the Crescent City Farmers Market. Along with a fey key volunteers, Hill has essentially saved these distinct varieties from the brink of extinction. And he’s given them names, such as the “Papa Sylvest,” to ensure that their breeding lines will remain distinct.

Volunteers who agree to adopt a vine receive a 16-page growers guide and in turn must keep detailed records of the care their plant receives. According to Hill, the project has plans for expansion: “While our seed distribution is free, we do expect next fall that our growing network of heirloom growers will produce thousands of seeds and they will be available for sale at nurseries that we certify as only selling home-grown Louisiana mirlitons,” he told the The Times-Picayune recently.

Like many favorite American foods, the Hua Moa banana arrived from elsewhere. This Polynesian banana has been grown in Tahiti, Hawaii, and eventually in Florida, where it became very popular with Cuban farmers in the Miami area.The banana thrived in Florida’s tropical climate and became a staple in the region, especially in Latino cuisine. Because of its Hawaiian roots the banana was marketed widely in Florida as the “Hawaiiano” (Hua Moa is Hawaiian for “chicken egg,” which gives you a sense of the fruit’s dimensions). 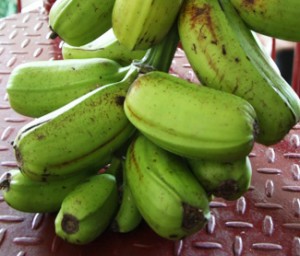 Hurricanes and disease all but wiped out production of the Hua Moa in the Miami area over the years, causing a heavy dependence on imported bananas.

Then, a few years back, a group  of active Slow Food Miami members started working to revive Hua Moa production, with the hope of  putting these important bananas back on the menu. Last year, local chef Michael Schwartz of Michael’s Genuine Food & Drink prepared a sold-out dinner featuring the fruit at the invitation of area chapter leaders. One of the Hua Moa’s winning qualities is that it can be prepared in both sweet and savory dishes. The versatile fruit appeared in dishes as far-ranging as ceviche, tostones, a spicy coconut milk soup, and pound cake.

The dinner was a collaboration with rare fruit grower Larry Siegel, one of the last remaining producers of the Hua Moa in the region. Seigel grows a range of tropical fruit on 35 acres in Davie, Florida. “I started with lychee, cherimoyas, longans, avocados,” he told the Genuine Kitchen recently.  “They took a big hit during hurricanes Irene and Wilma.  [But] coconut, papaya, and bananas always hang on!”

Introducing chefs and eaters to rare foods can spark a wildfire of interest. The resulting increase in demand can then help convince farmers to take on the risks and challenges associated with less common crops. Nominating the Hua Moa to the Ark was the starting point for more dinners, partnerships, and other events in support of this storied, unique fruit.

Are you interested in fighting for flavor? There are all kinds of other suggestions for encouraging food diversity on the Slow Food USA website.