The Climate Benefits of Sustainable Ranching 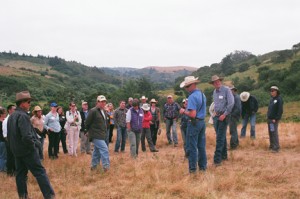 I recently attended a ranch field day at TomKat Ranch in Pescadero, California, hosted by the California Climate and Agriculture Network.  The focus was on the climate benefits of sustainable ranching-an overview of how properly managed rangelands (grasslands where animals graze) can sequester carbon dioxide (CO2) in soils and help reduce greenhouse gas emission.  This is no easy task, and one that is the subject of much debate.

With about 770 million acres of rangelands in the U.S., their potential contribution to mitigating climate change is not insignificant.  The 30-second science lecture (from this non-scientist) is as follows: CO2 is emitted into the environment in a myriad of ways and CO2, along with other gases like nitrous oxide and methane, all contribute to climate change.  One of the possible ways to reduce CO2 emissions is to keep grasslands in place, instead of plowing them up to make way for crops.  An increase in properly managed rangelands has the potential to reduce greenhouse gas emissions (by keeping those lands from being plowed up for crops). This could possibly sequester CO2 that is in the atmosphere by improving soil health and therefore increasing the growth of grasslands, shrubs, and trees where they were not before.

The field day attendees included a mix of ranchers, USDA employees, non-profits and local politicians, and the general consensus was, yes, properly managed rangelands are a good thing and most of the rancher attendees were already employing some of these techniques on their land.  One of the more interesting conversations was how you encourage others to do so?  Managed grazing leads to healthy soils which have a host of benefits above and beyond carbon sequestration–increased productivity of the land, increased soil fertility, increased water holding capacity (leading to reduced run-off and erosion), increased soil aeration, increased biodiversity above and below ground, reduced need for fertilizers, pesticides and herbicides, the list goes on.

But, the economic drivers of cattle production, in general, do not encourage ranchers to graze their animals up until the animals are ready for slaughter.  Nor do they encourage keeping ranchers’ land covered in native grasses, for example, when they could potentially plow it up and make more money planting row crops.  Proposed carbon payments would attempt to offset this potential loss in income by compensating land owners for the carbon they sequester in the soil.  This is rather difficult to measure. How much carbon warrants a payment? How long does the land have to be kept as grasslands in order to receive the payment?  If a rancher receives a carbon sequestration payment this year, but plows land up next year, all the climate change benefits are lost and the carbon is released into the atmosphere.  Measuring carbon sequestration rates and holding individual land owners accountable for their carbon sequestration commitments is quite difficult.

Recognizing that difficulty, one rancher suggested that instead of trying to pay people not to emit carbon, why not incentivize the production of the agricultural products that are a result of said carbon mitigating, healthy soil promoting, managed grazing techniques?  That is, don’t pay ranchers not to plow their land, make not plowing a naturally attractive alternative by paying more for grass-fed beef.  With many arguing that organic, local and/or sustainable foods are priced out of the reach of most consumers, there seems to be a greater trend towards trying to reduce, rather than maintain, the current prices of sustainably produced foods like grass-fed beef.

If the marketplace incentives aren’t popular, are there public policy options?  What does a policy that supports the production of sustainably produced foods like grass-fed beef and, therefore incentivizes ranchers to use managed grazing techniques, look like?   I’m curious as to what the Civil Eats community thinks. Please add your comments here on whether these positive environmental benefits should be compensated through the marketplace or through public policy.