Give Me My Fish | Civil Eats

Give Me My Fish 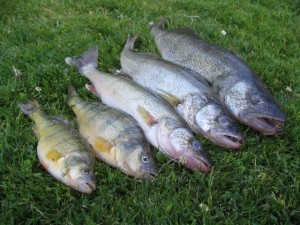 Thursday, August 4 is the final day for public comment on the Environmental Protection Agency’s (EPA) plan to limit mercury emissions from coal and oil-fired power plants. Two decades overdue, the proposed regulation would capture 91 percent of airborne mercury before it leaves the smokestack.

Despite widely available and proven technology, power-plant mercury currently floats unregulated beyond the reach of the Clean Air Act. While the utilities industry has delayed regulation through lobbying and court challenges, I have watched upwind construction of more than 20 new coal-fired generators over the past 20 years.

Containing the toxin is important to clean air and a responsible energy policy, of course. But for my neighbors and me it’s primarily an issue of food.

I live in the village of Saranac Lake, on a street named Lake, within a mile of Lower Saranac Lake, from which I’m not supposed to eat a single fish. My town is inside New York State’s Adirondack Park—not a park in the traditional sense, but a Vermont-size region of communities, protected forests and more than 11,000 lakes and ponds, from which the Department of Health advises I eat no pike, walleye or bass.

So it’s frustrating that there’s a barrier between us and the one local food that’s actually abundant—fish. The state annually stocks fingerlings here by the millions, and millions more hatch on their own. But as prevailing winds carry mercury from Midwestern power plants toward the Atlantic, it falls on the Adirondacks in rain and snow, poisoning the fish.

The matter-of-fact language in the booklet issued with my fishing license—“Fish can be good to eat and nutritious, but some fish contain chemicals that may be harmful to health”—is as forceful as a cigarette-pack warning circa 1966. Mercury concentrates as it moves up the food chain from zooplankton, to fish, to osprey or human. It can cause brain damage in fetuses and children, so women and kids must be especially careful.

The heavy metal is more toxic in the Adirondacks than in much of the Northeast because our bedrock lacks calcium to buffer another lingering export of coal-fired electricity: acid rain. Mercury reacts in wetlands and low pH to produce methylmercury, an organic form that living things absorb readily. 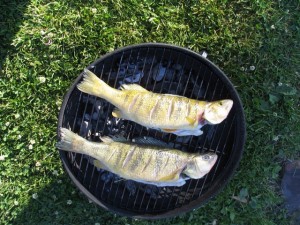 As I read about New England towns going back to the water with community-supported seafood cooperatives, the catch-and-don’t-eat policy of the Adirondacks grows increasingly intolerable. Angling here is promoted as sport, but I fish for food. Seventeen percent my county’s residents live below the poverty level; for some of them, fish for dinner is not just a choice.

I grew up in 1970s–80s Buffalo, New York, eating PCB-contaminated walleye from Lake Erie, a Rust Belt water ringed by factories and farms. After 38 years of the Clean Water Act, the Department of Health advises I may now consume more fish from Erie than from Lower Saranac, a loon-song lake fringed by cedars and ferns. Mercury persists longer in the ecosystem than polychlorinated biphenyls, but if Lake Erie can recover then there’s hope for other Northeastern waters.

Coal produces greenhouse gases and toxic fly ash, and obliterates Appalachian mountaintops. Mercury is one thing wrong with coal that’s relatively easy to fix, yet Ohio-based American Electric Power Co., Inc. (AEP) and coal-state legislators continue to stall. AEP even drafted legislation to delay new mercury standards and shopped it around Congress. EPA is scheduled to adopt a final rule by November, if it’s not derailed.

I may never get to eat a fish from my home lake. But for the sake of Saranac and the kids who love to catch fish there, we can’t let mercury slip by any longer.

Act now to help the cause. You can submit comments to the EPA via e-mail to a-and-r-docket@epa.gov or by visiting the comment site on-line. Be sure to include docket number EPA-HQ-OAR-2009-0234.

Mary Thill has lived, fished and worked in the Adirondack Park for 20 years. Read more >