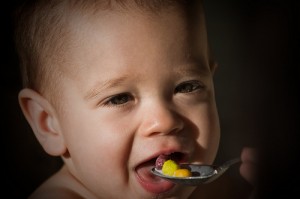 Food corporations enjoy carte blanche on what they can say about their foods, how and to whom they advertise, and even (to a large degree) the ingredients they choose to put in their foods. But when the Obama administration recently proposed voluntary guidelines [PDF] for the types of food advertised to children, industry giants decided to preempt these guidelines and create their own.

Since the government released its new guidelines, two powerful industry groups have reared up. One is the Sensible Food Policy Coalition, headed by former Obama press secretary Anita Dunn, and led by PepsiCo, Viacom, Kellogg’s, General Mills, Time Warner, the American Association of Advertising Agencies, and the Association of National Advertisers. This group was quickly created in response to the government’s new guidelines and its sole purpose is to prevent them from going into effect.

The second industry group making noise is the Children’s Food and Beverage Advertising Initiative (CFBAI), led by ConAgra, Coca-Cola, PepsiCo, General Mills, and Kellogg’s. The members of CFBAI sell thousands of food and beverage products around the world and thus share joint interests when it comes to advertising policies.

The government’s guidelines evolved as part of Michelle Obama’s Let’s Move! campaign and are intended to protect children from the onslaught of advertising for highly processed, nutritionally void foods. The guidelines propose that by 2016, all food products most heavily marketed to children and adolescents ages two to 17 must meet the following two nutrition principles, “provide a meaningful contribution to a healthful diet,” and “should minimize the content of nutrients that could have a negative impact on health or weight.”

This translates as quite modest caps on added fat, sugar, and sodium: One gram or less of saturated fat, zero grams trans-fat, no more than 13 grams of added sugars, and no more than 210 grams of sodium per serving. The trouble is, many processed foods already meet this criteria: Trix cereal, which is heavily marketed to children across various social media platforms as well on TV and in print, contains 10 grams of sugar per serving, zero grams saturated fat and trans fat, and 180 mg of sodium, which puts it right up there with some of the worst foods our nation’s children are eating. Trix is chock full of sugar, additives, food dyes, and preservatives that have been to shown to have a myriad of ill effects.

The food industry members of the CFBAI called the voluntary guidelines, “unworkable and unrealistic” and then proposed their own guidelines—guidelines that would require no modifications to two-thirds of their food products. Meanwhile, the CFBAI is trying to paint this as groundbreaking progress and even the chairman of Federal Trade Commission (FTC) agrees. “The industry’s uniform standards are a significant advance and exactly the type of initiative the commission had in mind when we started pushing for self-regulation more than five years ago,” Jon Leibowitz, chairman of the FTC said in a statement about the advertising initiative.

It’s unclear how creating regulations that allow for two-thirds of the processed food products to remain unchanged is “significant progress.” What is clear is that the industrial food giants want no part in creating healthier foods for children. They claim the modest guidelines will cause job loss in an already troubled economy, appealing to the conservative base that scoffs at any government regulation, and crying “nanny-state,” when the government attempts to intervene in our health crisis.

And while the right wing makes claims of socialism and ridicules Michelle Obama for trying to regulate food corporations on grounds that the few should not control the many—the truth is, the few are indeed controlling the many. Large food conglomerates like General Mills, Kellogg’s, Con-Agra, PepsiCo, and Coca-Cola are the epitome of this scenario. These corporations effectively control what most middle-income and low-income people eat in this country. If you are born into a poor family, with relative food insecurity, then it makes economic sense to eat the most calorically rich (usually nutrient-void) foods for the least amount of money. Not coincidentally, this is what the large food corporations excel at producing.

It comes as no surprise then, that the most recent research examining obesity found that poor, African American women make up the largest population of obese Americans, with Latino women following close behind. In fact, poor women of all races were the most likely to be obese and the research shows troubling links between poverty, government assistance and health problems in the United States.

Kelly Brownell, director of the Rudd Center said this is particularly alarming since these are the populations most at-risk for obesity and diabetes. According to the Centers for Disease Control and Prevention, the rate of obesity for African Americans is 51 percent higher than for white Americans, and the prevalence of obesity amongst the nation’s Hispanic American population is 21 percent higher than their white peers.

The Obama administration is on the right track by creating guidelines to regulate a food system that functions completely unchecked but it shouldn’t cower to industry pressure by allowing food corporations to regulate themselves—isn’t that exactly what they’ve been doing for the past 60 years?