With Food Stamps on the Chopping Block, One Food Bank Feeds Many | Civil Eats

With Food Stamps on the Chopping Block, One Food Bank Feeds Many 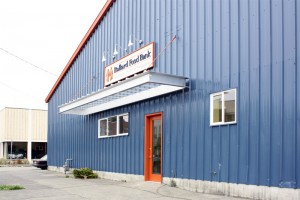 Dan and Isabelle sit patiently on the folding metal chairs in the tastefully decorated waiting room of Seattle’s Ballard Food Bank. Intelligent, soft-spoken, and in his late 50s, Dan is a chronically underemployed architectural draftsman who barely managed to eke out three days of temporary work over the past week. His unemployment benefits have long since evaporated and he’s thinking about applying for food stamps, although he cringes as the words leave his mouth. With his shrunken income dedicated to keeping a roof over his head, he and Isabelle are two among 1,200 or so neighborhood residents who will request a shopping cart-full of food this week at the food bank.

Peggy Bailey, Ballard’s Operation Manager, is one of those dedicated, unflappable souls whose work holds the lives of others together as the larger universe spins out of control. Her recitation of statistics is the “growth” story that you’ll hear from any of the 60,000 emergency food sites across America: “In 2001 we were serving about 350 people per week; four years ago it was 450; now we’re serving between 1,100 and 1,200.” Peggy escorts me past tattooed skateboarders, young women clutching babies, and unshaven men for whom a good night is a dry patch of grass underneath a bridge.

Like all the 25 volunteers (out of a total of 100) on hand this day—good neighbors who keep the flow of people safe and dignified—Peggy beams with pride over the food, large walk-in refrigerators, and the recently retrofitted 6,200-square-foot machine shop that’s been their new home for only a year (after relocating from their cramped, dilapidated home of nearly 40 years). Almost half of the available food is produce, some of which comes from nearby Pea Patch community gardens and local fruit tree gleaners. An abundant supply of artisan bread, fresh dairy products, and even enough frozen meat to give each person two packages, fill the shelves. Not only can you select from a rather remarkable range of products, e.g., microwaveable entrees that retail for $9.00 at Trader Joe’s, and a “no-cook” section that, in an average month, serves 350 people without kitchens. In addition, nearly 100 bags are assembled and delivered weekly to shut-ins and people with special dietary needs.

Unlike food banks in days of yore, Ballard does more than give away food. If you don’t have a permanent address, they’ll act as your personal post office box, a service currently used by 480 people. Case workers from the Department of Social and Health Services try to connect food bank users with SNAP (food stamps) as well as medical and dental services. Need help paying your rent or electrical bill? You can apply for a $300 voucher for the former and $200 voucher for the latter.

When I asked Peggy how she keeps up with the demand for food, she told me, almost blithely, that enough food was not a problem. In a comment that would make her the envy of every food bank worker in America, she said, “We’ve never had to turn anyone away due to lack of food. This is a very generous community. We have Whole Foods, Trader Joe’s, Safeway, and dozens of other food donors.” While supporting five paid staff, three trucks, and a good-size modern facility, the food bank gets 95 percent of its operating funds from private donations, receiving only $40,000 per year from Seattle city government. One anonymous individual, for instance, gives the Ballard Food Bank $2,000 each month just to buy fresh dairy products.

In contrast to the generosity of the surrounding neighborhoods, you have the U.S. House of Representatives. If the miracles that these Seattle residents pull off every day make Jesus Christ’s feeding of the 5,000 look like a cheap card trick, the House majority’s proposal to slash $3 billion from SNAP, WIC, and TEFAP (The Emergency Food Assistance Program) makes Scrooge look like a Salvation Army volunteer. At a time when the nation’s economy is still on life support and when a record 43 million Americans are receiving food stamps (cite), the House Republicans want to hack the safety net with a machete while leaving the silver cutlery of hedge fund operators untarnished. Take from the poor, but don’t touch a dime of the rich.

Ballard is a human-scale urban environment whose sloping landscape gently lowers you to the shores of the Puget Sound. On street corners, food bank volunteers greet the homeless people by name, who, in turn, respond in a friendly manner, pleased that there are people who don’t avert their eyes. Stroll a few blocks north of Market Street, and you’ll come to a lovely park where grassy slopes and park benches are populated by homeless men catching a ray or two of Seattle’s stingy sunlight. In the opposite corner is a small skateboard tunnel where young dudes, hat brims cocked at precise angles, practice their chutes and curls. Between the skaters and the homeless are several fountains that spray giggling toddlers cheered on by happy moms.

The park reflects Ballard’s values: There’s room for everybody, diversity is encouraged, and the community does its darnedest to meet everyone’s needs. But, beneath this cloak of tolerance, there is a creeping sense that there may be limits to what any group of caring people can do. Perhaps it’s symbolized by the police cruiser stationed just across the street from the “homeless end” of the park. Maybe you hear it in the voices of the young men at the food pantry who were too ashamed to give me their names, but did say that in spite of a couple of years of college they couldn’t find jobs: “We’re not trained for anything.” Or perhaps you can smell it on the breath of the middle-aged drunken man, who according to Peggy had been “doing so well up until now.”

If the House Republicans have their way, the Ballard Food Bank’s waiting room could very well become so crowded that the smiling volunteers will be replaced by stern-faced security guards. When I asked John, an 87-year old food bank volunteer of 12 years, what he thought was behind the ever rising number of clients, he said emphatically, “It’s all about the economy. I see how embarrassed people are who are asking for help, but you can either sleep on the street or come to the food bank.” One has to ask if that is the vision that the budget cutting, non-taxing conservative minority have for America. If that is true, and every statement from the Republican leadership seems to suggest that it is, then one has to ask where the rage is at this time in our nation’s history.

How big must food banks get to contain the ever-swelling legions of un- and underemployed workers? How much food will Ballard’s neighborhood grocers have to donate to ensure that all the young mothers can feed themselves as well as their babies? Is there indeed a tipping point when community compassion can no longer clean up the mess made by mean-spirited politicians who avert their eyes from the growing victims of a failed American dream?

Evelyn, 87, has been volunteering at the Ballard Food Bank for 15 years, longer than anyone else. She’s a feisty, retired machinist who worked for a Boeing Aircraft subcontractor. Sitting at a table where she was sorting nuts into small plastic bags for the home delivery sacks, Evelyn shared the most commonly expressed reason for volunteering at food banks. “If you’ve been blessed, you have to give back.” Yes, I said, I’d heard that sentiment from many people in the emergency food world, but I wondered if there wasn’t something else. At that point the fiery machinist union member took over from the charitable grandmother. Growing up during the Great Depression on a Minnesota farm, she did not need the reason for rage explained to her. “Things have to change in this country,” she said, eyes narrowing and pronouncing each syllable more distinctly. “The idea of not taxing the rich is ridiculous. We have to stop farm and oil subsidies. We got to get politicians to care about people all the time, not just when they’re trying to get elected.”

Compassion and “giving back” may not be sustainable when one class of Americans lives under the House Republicans’ Golden Fleece, while bourgeoning flocks live under highway overpasses. So that compassion may live, we must sometimes release the rage.