Recently, I attended an event at New York City’s famous James Beard House that took me back to Yellowstone National Park.

Around this time last summer, I was on a tour boat on Lake Yellowstone with my family, where we learned that lake trout, a non-native species introduced around 1995 (presumably by an angler), had grown extremely problematic for the ecosystem of the lake–in particular, for the prized cutthroat trout, which is easily preyed upon and out-competed by the larger lake trout.

Not only was there no fishing limit on lake trout but in fact,  the only rule about catching them was that if you weren’t going to eat them, you had to kill them before throwing them back. According to our tour guide, you could cart a fresh-caught lake trout to any of the park’s restaurants for professional cooking and earn a pat on the back from the chef and staff.

Why did my visit to the Manhattan-based James Beard House inspire me to recall that ecological factoid from my visit to the nation’s oldest national park? Recently, Kerry Heffernan, head chef for Central Park’s South Gate Restaurant, prepared a delectable feast based on four exotic invasive varieties of seafood: Green crab (known to most fisherfolk as bait for blackfish), Asian carp, lionfish, and blue tilapia.

The brainchild behind the event was Washington, D.C.- based Food & Water Watch, producers of the Smart Seafood Guide. In partnership with James Beard House, the watchdog organization had invited Chef Kerry to prepare the invasives Iron Chef-style–with a little more than a day’s notice. This isn’t much time to get acquainted with the four exotic new ingredients, but Heffernan managed the challenge admirably, at least, according to this amateur seafood lover.

As I made my way through the famously small James Beard kitchen, up the stairs, (past the shower where Beard supposedly enjoyed showering outdoors), rubbing elbows with food writers, chefs, and staff from Food & Water Watch, while sampling Chef Kerry’s tasty creations, I got to feeling hopeful.

Aside from the Yellowstone example, there are many cases of invasive species wreaking havoc, on water and on land, on ecosystems around the globe. Eating them would seem not only to mitigate harm, but to actively improve those “invaded” ecosystems. With so many proverbial genies let out of so many proverbial bottles–is it possible to fish and market and eat our way out of a situation that, at least in part, we’ve fished and marketed and eaten our way into?

Scientists emphasize that human consumption is only part of what is needed to control invasive species and restore native fish populations, and that a comprehensive plan must include restoring fish predators to depleted habitats and erecting physical barriers to prevent further dissemination of the invaders.

“We are not going to be able to just eat our way out of the invasive species problem,” Dr. Kramer said. “On the other hand, there are places where this can be a very useful part of the strategy.”

Having written about quite a few of the perils of our modern food system, it makes sense to me that there are no silver bullets for the many invasive species scenarios. Surely, working solutions must be as nuanced, or nearly so, as the complex problems we face, on land and at sea. At local levels, though,  harvesting these species as food sources could help beat back some of these invasives, and might help local economies, too.

Food & Water Watch director Wenonah Hauter is enthusiastic about the potential benefits of marketing invasives, noting that in order to do so effectively, supply chains need revamping and some of the species may need some added sex appeal, in some cases, through re-naming. 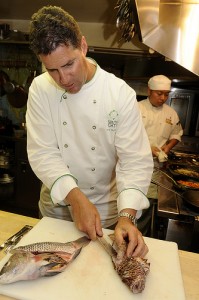 At the event, Chef Kerry spoke to a “learning curve,” for himself and other chefs, but also acknowledges the role chefs can play in promoting more sustainable seafood choices. In true James Beard fashion, foundation vice president Mitchell Davis called this a “cutting edge” culinary trend, one that the foundation was happy to get behind.

Count me in. Below, some information on the seafood we sampled last week. Here’s to guilt-free seafood smorgasboards!


Actually a catch-all term for eight different varieties of carp, including the common goldfish and silver carp, known for their tendency to jump–high–when spooked by boats. Cultivated for over 1,000 years in China, the varieties of Asian carp generally referred to as invasive in the U.S. are grass, black, silver, and bighead carp. Over the last decade or so, Asian carp have been the subject of controversy and legislation, as many worry that some of these varieties will make their way into the Great Lakes. Asian carp are believed to be low in mercury, though the FDA has yet to evaluate them for contaminants. Prolific breeders, they can out-compete other fish for feed like algae and phytoplankton.

Chef Kerry describes them as sweet and mild, like whitefish.  He also noted that the large fish was difficult to debone, a likely reason that this fish has not caught on in the U.S.


Native to the Indo-Pacific, the aptly-named lionfish (also known as the scorpion fish or firefish) is believed to have been introduced to East Coast waters, including the Caribbean, by pet owners releasing aquarium fish into coastal waters. The lionfish is prey to no known predators, is a voracious eater, grows fast and reproduces year round. It is quite impressive with its spines, which can cause death in other sealife and major discomfort for unlucky swimmers of the human variety.


Chef Kerry couldn’t think of a counterpart and described it as a cross between John Dory and monkfish.

Introduced on the East Coast in the early 1800s, likely as a castaway on a European ship, the European green crab was discovered on the West Coast as well during the late 1980s. The FDA has not performed testing on the green crab specifically, but it is considered likely to not contain high levels of mercury or PCBs because it is sensitive to these contaminants itself.


Chef Kerry notes that the green crab boasts more flavor than its blue counterpart, but that its small size makes for time-intensive meat-picking. He used it in a delicious crab soup and says he’s waiting for molting season to try it out as a soft-shell crab.


Native to Northern and Western Africa and the Middle East, also known as Israeli tilapia, blue tilapia (PDF) were, in some cases, intentionally introduced as weed control in Gulf state lakes, and are currently wreaking havoc in lakes in Florida, Texas, and Nevada.

Compared to its farmed counterpart (which, so long as it’s grown right–we like recirculating systems–are quite sustainable) blue lake tilapia has a less “muddy” flavor, according to Chef Kerry.

Watch video on actual footage of lionfish hunt for the tasting: