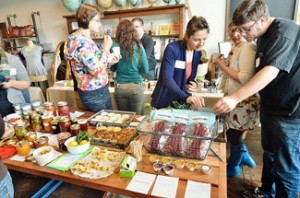 When San Francisco’s Underground Market got started, the city’s health department recognized it as a private event where people exchanged (albeit, with money) homemade foods. Interested participants simply had to sign up on the Web site of the event’s host organization, Forage SF, and they became “members.”

Soon the market became one of San Francisco’s most popular phenomena–a place where hip, mostly young food entrepreneurs could get their brands out there and foodies could gather, socialize, and discover bafflingly delicious items such as “bacon brack.” The whole point, said founder Iso Rabins, was to create opportunities for food entrepreneurs who could otherwise not afford to operate out of certified commercial kitchens.

When the event swelled to accommodate the hundreds and soon thousands of people who would line up to attend, the market became an undeniably public. Then, earlier this summer, the San Francisco Health Department put a halt to the whole delicious operation. At present, the market is in limbo and Rabbins, the Health Department, and many others are chewing on the question: What makes an event or club private?

Now picture all of this food sharing activity on a spectrum. At the private and personal end, we eat a homemade meal with our family. At the public and commercial end, we get chicken nuggets from the drive-thru window at a chain restaurant. Somewhere in between a line has been drawn to determine when to impose protections and regulations. At the Sustainable Economies Law Center, we are on a constant search for that elusive line.

What is a Private Club?

“Private club” could very well be the magic password to the sharing economy, for legal purposes, anyway. The term might conjure up exclusivity, but, to the extent that private clubs are exempt from burdensome legal regulations normally applied to public activities, this designation also benefits groups of people that come together to share.

The public/private distinction is relevant for the purpose of applying many laws, not just food regulations. With a shortage of case law in the food realm, we can derive guidance from a handful of cases that examine the issue in the context of Civil Rights laws, the Americans with Disabilities Act (ADA), smoking laws, and employment laws. For anyone wanting to delve deeper, see the original version of this article.

The cases vary, but generally, courts have weighed a handful of factors to decide whether a club is really and truly private. Factors that courts tend to weigh include:

Although no single factor is controlling when determining whether a club is private, most courts have considered the selectivity of the membership to be of great importance. Preferably, private clubs will have meaningful criteria on which people are chosen to be accepted as members, rather than allowing anyone to join at any time.

Private Restaurants and Markets
How does all of this apply to the sharing of food? Is it possible to create a “restaurant” or “market” that is private and, therefore, exempt from some of the regulations that apply to its public counterparts? Here’s a look at these possibilities, as well as a scenario for a private raw milk club.

Let’s say you and 10 of your close friends agree that you make the world’s best quiche. You jointly hatch a plan for Quiche Café, which is essentially a weekly dinner party at your house. You buy the ingredients and make the quiche. Your 10 friends, the core members of the Café, bring the drinks and entertainment. Most importantly, everyone helps out with the dishes. Each core member of Quiche Café is encouraged to bring a friend or two, so each dinner is attended by an average of 25 people. Everyone chips in around $8, even though you’ve calculated the per-person cost of ingredients to be around $4. Everyone feels that any surplus could be seen as a modest stipend or your thank-you gift for being the hostess with the most-est. 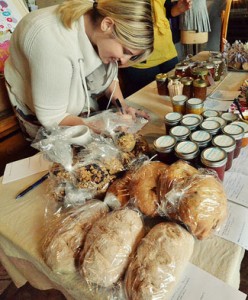 So is Quiche Cafe private enough to avoid health and safety regulation? Based on guidelines we’ve gleaned from the court decisions, we think so.* Participation is restricted to the original 10 friends and their guests. Quiche Café is neither advertised nor open to the public. The members jointly manage the club for their own benefit. Although the chef is making a small stipend, the core purpose of the activity is to provide social and edible sustenance to friends.

(Note that zoning is a separate issue. A neighbor could still complain to the local Planning Department that you are operating a social club or business out of your home in violation of the residential zoning of your neighborhood. Arguing that you are a private dining club might not help here, but you could argue that this is a dinner party, which is generally accepted as a residential use of a home.)

Let’s imagine you want to share your quiche with more people. You hear about a weekly gathering where people exchange homemade foods. Sometimes people gift their foods to each other, sometimes they barter, and sometimes they sell. You have to be recommended for membership by someone who is already a member. You also need to fill out a membership application and explain how most of your ingredients come from socially responsible sources. Once you are admitted as a member, you are given passes to bring up to five guests.

No one can get in the door without a pass, and you are not allowed to sell your five guest passes or give them to people you don’t know. Members are required to pay monthly dues of $50, to attend four meetings per year, to elect a board of directors, and to sometimes take part in special committees. The board of directors may hire a manager for the event, but major decisions about the gathering are made by the member-elected board. The gathering is limited to 100 food artisan members and overall attendance is limited to 600.

Again, we feel that this activity should be treated as private and not subject to health permit requirements.* The activity is collaboratively managed by members, membership is restricted, the event is not publicly advertised, and non-member attendees may come, on a limited basis, as guests of members. Although income from the event may contribute to the livelihoods of the food artisans and the event manager, the entity itself is not operating for a profit, but rather to provide a forum for the appreciation of interesting and hand-crafted foods.

Sharing goats and cows is a common way that people have overcome barriers to raw milk access. Raw milk is subject to strict food and agricultural regulations, and has become a hot topic with the recent and dramatic shutdown of some raw milk operations and vendors. Most recently, we learned that a goat-sharing arrangement managed by Evergreen Acres Goat Farm was cited by the District Attorney in Santa Clara County, California. It seems that the legal particularities of goat sharing still need to be explored and clarified. Nevertheless, a small and private group of goat sharers, in our opinion, should be exempt from the legal hurdles.

Here’s an example. You and 10 community members come together to buy and share ownership of four goats, which are kept in your yard. Each week, members stop by to pick up bottles of milk. Your group has decided to allow in only four more members, but only if those members demonstrate that health needs prevent them from consuming pasteurized milk. Everyone takes turns helping out with the goats, and the group meets monthly to touch base and meet about goat-related things. Everyone chips in $30 per month for goat food and veterinary costs. Since you are the designated goat keeper, you don’t have to pay the $30.

Once again, we believe that this club is private and should not be subject to food safety regulations.* Like the private “market,” this goat club is collaboratively managed by the club members, membership is restricted to 15 people, and it is not advertised to the public.

But Feeding Total Strangers is Fun and Important!

This is true. Enabling people to feed each other should be a high priority, and it won’t always be practical or desirable to relegate our food sharing activities to the private realm. We’re hungry for a world where tons of small food entrepreneurs can make it in competition with the giant food conglomerates. The shareable food movement localizes economies, feeds communities in challenging economic times, and supports our environment by encouraging localized food production and lower carbon “foodprints.”

There’s much to say on this topic, but here are a few thoughts. First, we can create new platforms for food production and food sharing: Shared commercial kitchens, like La Cocina in San Francisco, are part of the answer, because they reduce the barrier to entry for small entrepreneurs; more community marketplaces create a space for entrepreneurs to get their products out there; and marketing cooperatives can help entrepreneurs aggregate and sell their products. These are all sharing solutions that give entrepreneurs access to spaces and markets that are normally expensive and inaccessible.

Furthermore, we can all work to pass new laws that lower the overall set of legal barriers to small food enterprise. An easy place to start is with cottage food laws which have already been passed in half of the U.S. states. Cottage food laws enable the sale of home-made foods that are “non-potentially hazardous,” such as breads, cakes, jams, and granola. Allowing the sale of back-yard produce is another step, and a handful of cities have recently done this or are currently considering it. (See San Francisco, Berkeley, and Oakland.) Food sovereignty laws take this even further and endeavor to de-regulate many facets of food production.

* Disclaimer: Please don’t rely on anything in this article as legal advice. In spite of what some courts may hold or what we at SELC may opine, every jurisdiction has a mind of its own.

Photos of the LA Food Swap by TypeFiend.

Janelle Orsi is the co-director of the the Sustainable Economies Law Center. Read more >