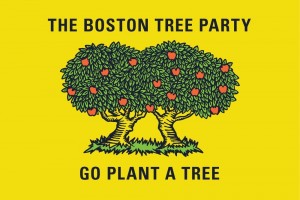 Imagine communities coming together to care for their trees, to harvest and share their fruit. These trees become a tool of environmental restoration, helping to restore the health of our soil, improve air quality, and absorb rainwater runoff. From them we learn, participate, and connect to the social and natural world around us. This is the vision of the Boston Tree Party.

At its core, the Boston Tree Party is a diverse coalition of organizations, institutions, and communities coming together in support of civic fruit. We’re calling for the planting of fruit trees in civic spaces and we’re promoting the fruits of civic engagement. 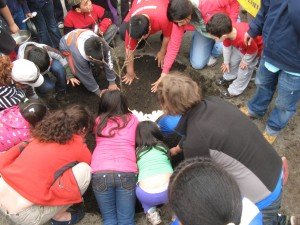 Over the past three months since our launch on April 10, 2011, more than 50 communities from all over greater Boston have come together to form delegations and plant pairs of heirloom apple trees all over the city. Many of these delegations were partnerships of two or more groups, and each delegation received a tree planting kit with everything they needed to plant and grow two glorious apple trees. To support these communities we’ve created the Apple Alliance and the Apple Corps. The Apple Alliance, a partnership between several Boston based gardening education organizations, will work together with our official Pomologists, John Bunker and Michael Phillips, to offer free and low-cost holistic apple tree care workshops starting next spring. The Apple Corps, a youth corps developed in partnership with YouthBuild Boston, will operate as an extension service of sorts, offering advice and support to participating delegations.

In East Boston, the East Boston Neighborhood Health Center started a new community garden on top of an abandoned parking lot. They broke through the concrete to plant their trees. They used their tree party to inaugurate this new community effort.

In Cambridge, a public Elementary school partnered with a gardening education organization, an after-school program, and the Cambridge Plant and Garden Club to do their planting. Their planting party featured apple games, apple treats, and a study of apple biology and ecology.

In Dorchester, a low-income housing community for grandparents raising grandchildren partnered with a youth development organization, a community development corporation, and the Boston Architectural college to restore and renovate a community garden that had become neglected and dilapidated. They used their party to mark this new beginning.

But why did we choose to plant apples in the first place?

We’ve long been taught that “an apple a day keeps the doctor away” but there’s a very interesting historical connection between the history of Boston and the history of apples, which makes the planting of these trees even more relevant to our landscape. The first apple orchard in the United States was planted on Beacon Hill by the first European settler, William Blackstone. The oldest named variety of apple in the United States — the Roxbury Russet — was developed in Roxbury in the 1630s.

When we plant heirloom varieties around our city, we re-contextualize our history by bringing diverse types of the fruit back into our marketplace. At peak apple production in the United States during the 19th century, there were over 15,000 named varieties of apples that were eaten and sold. Today, 40 percent of commercial market is dominated the Red Delicious apple (the classic cafeteria apple) and a mere 10 other varieties make it to our grocery shelves. Like the apple’s inability to bear fruit without a heterogeneous partner to cross-pollinate with, we know our project requires communal action: We can’t produce fruit alone, or with others just like ourselves. We must cross-pollinate, care for our harvest, and develop a relationship with our natural landscape over time.

In about four years, these newly planted apple trees will collectively start to produce between 10 and 15,000 free apples every year. These trees can live anywhere from 50-100 years, which means a lot of free apples for the city of Boston.

Over two hundred years ago, a small group of people dumped a whole bunch of tea into Boston Harbor and made a big splash. This performative and symbolic act helped to launch the movement for American Independence. With our symbolic planting, we hope to help launch a new movement—a movement that works across boundaries to make fresh healthy food accessible to all, a movement which greens our cities, a movement that spreads fruit trees in civic spaces all across the country, and a movement which cares for these trees and the well-being of all citizens. That’s our imagined vision and we’re well on our way.