A Nutritional Facts Label for the People, By the People | Civil Eats

A Nutritional Facts Label for the People, By the People

The U.S. Food and Drug Administration (FDA) is in the process of revising the nutritional facts label, that rectangular box of information outlining the calories, serving size, and percent daily values on packaged food products.

The black and white nutritional facts label was first standardized in 1994, after the passage of the Nutrition Labeling and Education Act, which mandated food product packaging to clearly state fat, saturated fat, sugar, and sodium content. Since 1994, little about the label has changed other than the addition of trans-fats in 2006. The Obama administration has prioritized making nutritional information easier for consumers to understand. In February 2010, the FDA asked the Institute of Medicine (IOM), an independent nonprofit scientific organization, to examine front-of-the-package nutrition rating systems and evaluate how consumers understand front-of-the-package labeling. The IOM is expected to release its report this fall.

Last year, Michelle Obama told the Grocery Manufactures Association (GMA), “We need clear, consistent, front-of-the-package labels that give people the information they’ve been asking for, in a format they understand.” In response, the GMA and the Food Marketing Institute on January 24 launched a brightly colored new label that is already beginning to show up on food packages across the country.

The in-house industry label has raised concerns from experts like Dr. Kelly Brownell, director of the Rudd Center for Food Policy and Obesity at Yale University. In an opinion piece published last month in the New England Journal of Medicine, Brownell wrote that the industry’s new label can’t be trusted and called it a “unilateral, unscientific, preemptive approach taken by the food companies.”

In May, UC Berkeley Graduate School of Journalism’s News21 project, together with GOOD  launched Rethink the Food Label, a contest to redesign the nutritional facts label. We decided to give consumers — the people who actually use the label — a voice in determining what information is most useful in making healthier food choices.

Since then, more than 50 designers entered the contest, with entries ranging from the hyper-technical to the truly bizarre. Some gave calories, fats, and sodium a letter grade —“A” for excellent or “F” for fail, for example. Others built smart phone apps. Many made percent daily values easier to understand by showing them as a graphic proportion of 100 percent. One even included how many laps you’d have to do in an Olympic-sized swimming pool to burn off a snack. The three designs below represent a small sample of the submissions that came from all over the world. See all of the designs at Rethinkthefoodlabel.com.

Our judges include Michael Pollan, author of The Omnivore’s Dilemma; Robert H. Lustig, M.D., Professor of Clinical Pediatrics in the Division of Endocrinology at the University of California, San Francisco; Andrew Vande Moere, Associate Professor at K.U. Leuven University in Belgium and founder of Information Aesthetics; Laura Brunow Miner, designer and founder of Pictory; and Michael Jacobson, executive director of the Center for Science in the Public Interest; and advisors Gary Taubes and Harold McGee. Winners will be announced on Monday, July 18. We invite the public to share their favorite designs on Twitter and Facebook and will select a People’s Choice Award based on the social media tally. The public favorite will be showcased along with the top three designs as chosen by our panel of judges.

We asked each judge to outline how they thought the current nutritional facts label might be improved. “The focus on nutrients is probably inevitable but it distracts from the issue, whether you’re getting real food or not,” said Pollan, who wanted the degree to which a food was processed to be clearly stated on the label.

Jacobson, at the Center for Science in the Public Interest, wanted to remind consumers that the current label does get some things right. Still, he said, the label has fallen short of expectations. “Nutrition labels didn’t have nearly as great an impact on what companies produce and what people eat as had been hoped 20 years ago,” said Jacobson. “The mass of numbers, percentages, and scientific terms are confusing at best and, at worst, like a foreign language to even educated shoppers.”

“It’s too small and too hard to read,” said science writer Taubes. “It focuses on the wrong information. The fat and sodium content of the foods are not nearly as important as the sugar and digestible carbohydrate content.” Designers Miner and Vande Moere stressed the need for a more colorful and eye catching design.

In the end, it is eaters who need to understand labels, not industry groups or government agencies. We hope these designs will democratize the process and push policy makers and food manufacturers to think hard about good design and what exactly we need to know in order to make informed, healthy choices about what we eat. 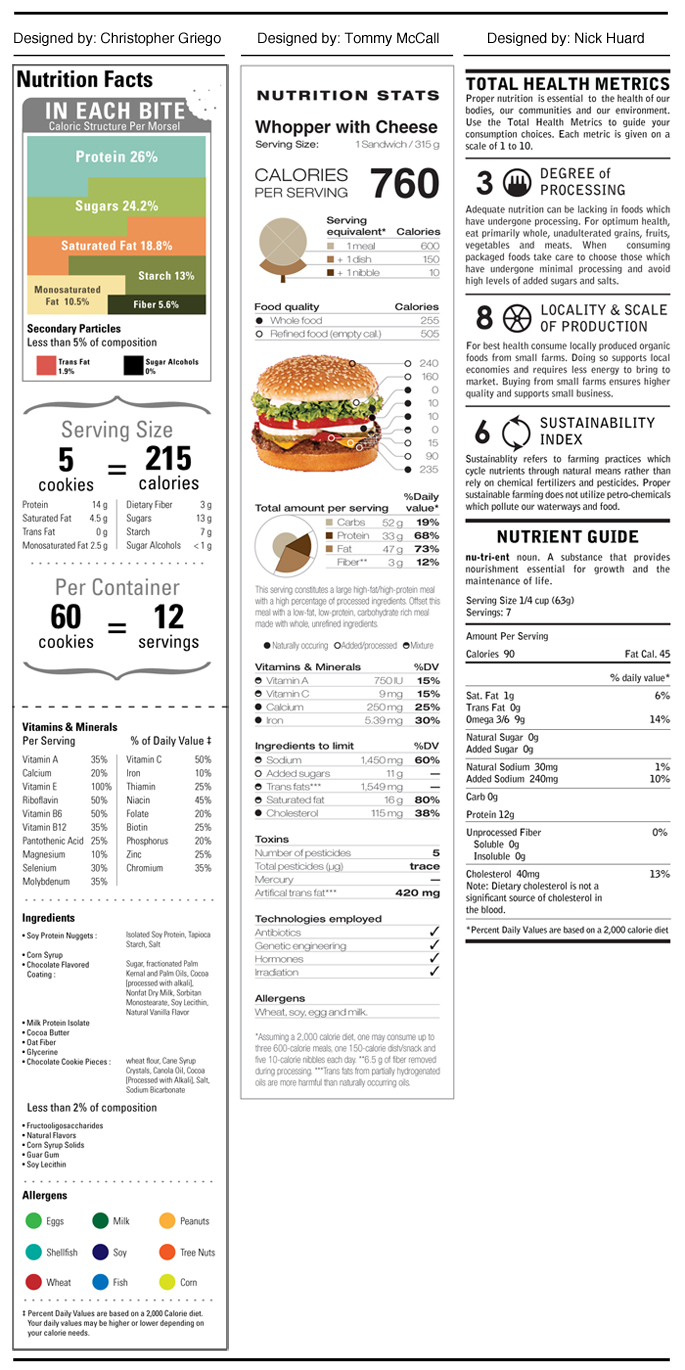