New York City: Put Down the Chicken, Pick up the Seitan! | Civil Eats

New York City: Put Down the Chicken, Pick up the Seitan!

By Emily Gilbert and Ashwini Srinivasamohan 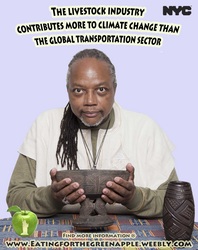 There has ostensibly been a dialogue among New York City legislators around food, as seen through Council Speaker Christine Quinn’s Food Works resolution, Public Advocate Bill de Blasio’s (at the moment dormant) NYC Foodprint legislation, and Manhattan Borough President Scott Stringer’s Blueprint for Sustainable Food System initiative. But there has yet to be a watershed policy that explicitly acknowledges and addresses the connection between “cool foods” and reducing the effects of climate change.

Food is a tremendous component of our global ecological footprint, specifically the livestock sector. With regards to anthropogenic green house gas (GHG) emissions, livestock production generates nine percent of the carbon, 65 percent of nitrous oxide, 37 percent of methane, and 64 percent of ammonia.

Led by Mia MacDonald, the Executive Director of the non-profit action think tank Brighter Green, we were among a group of nine students tasked with creating a set of policy recommendations for the aspirational client of the Mayor’s Initiative on Food and Climate Change, a yet uncreated programme out of the Mayor’s Office. In addition, a supplementary campaign and toolkit was designed to empower individuals and communities to increase cool foods in their diet with–and without–the support of the government.

The client remained “aspirational” in light of the omission of food issues in NYC’s 2007 PlaNYC report, a strategic framework to reducing NYC’s GHGs by 30 percent by 2030, while improving the economic, social, and environmental well-being of the city. That said, we were careful to be wary of the practical limitations faced by a city government.

By encouraging cool foods consumption, the hyper-urban NYC (the most populous in the States and among the most ethnically diverse in the world), has the potential to reduce the local and national carbon footprint while fostering a culture of cool foods consumption. With programs designed to reach various demographics, cool foods will be neither a fad nor a kitschy way of life for the wealthy, but a fundamental shift in how we understand the health of our bodies and planet.

After an extensive literature review of policies and campaigns designed by different municipalities around the world that were both related and unrelated to food issues, the students created the Eating for the Green Apple initiative.

Over the course of the three months, we designed a set of responsive strategies for NYC to reduce its GHG emissions.

The proposed public awareness campaign consists of an interactive, user-friendly Web site containing several features including additional facts on cool foods, a recipe index, and a downloadable version of the toolkit; a poster series to be distributed throughout the city on subways, bus stands, and buses with photos of ethnically diverse New Yorkers a factoid about climate change and cool foods, and a link to the EGA Web site; and partnerships with grocery stores in various boroughs to help raise awareness and gauge levels of interaction with the campaign.

The toolkit includes a set of key actions New Yorkers can take to increase their cool foods consumption, including joining a Community Supported Agriculture (CSA), cooking your own food, and talking to your grocers. Individuals can adopt and share these actions easily, and refer to the entire toolkit for further guidance and rationale. We also included a few New York University-specific actions to demonstrate how the toolkit can be tailored to specific institutions, communities, and organizations.

The final report is available for free download here.

New York City has an impressive track record when it comes to pushing through progressive and groundbreaking legislation, as well as orchestrating comprehensive initiatives for social causes. Take the stomach-churning but nonetheless memorable “Pouring on the Pounds” campaign posters and videos reminding New Yorkers to not “drink themselves sick” with soda and other sugary drinks. Or the mandate to restaurants and quick serve food outlets that make calories publicly available to post them on menus.

So what’s stopping NYC from taking on cool foods? EGA presents a realistic approach to address the clear and present need for addressing climate change through our dietary choices in New York City.

Emily Gilbert is a recent graduate of New York University’s Environmental Studies Program. A passionate Farm Bill junkie and food justice activist, Emily will be interning with the Food and Agriculture program at Worldwatch Institute in Washington D.C. in fall 2011. She can be reached at ec_gilbert@yahoo.com. Ashwini Srinivasamohan is a recent graduate of New York University, with a BA in Environmental Studies, and minors in Anthropology and Spanish. She currently works as the Resource Center Program Assistant for the Association for the Advancement of Sustainability in Higher Education (AASHE). She can be reached at ashwini@aashe.org. Read more >