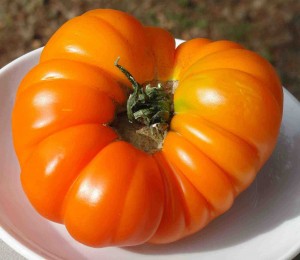 Summer in San Francisco is here, and if you listen carefully, you will hear a cry from locavores: “The tomatoes are here!” Our farmers’ market tomatoes usually start with small cherry tomatoes, which burst in your mouth, and as we head into August, you’ll start seeing larger tomatoes, which are perfect for salads, finally culminating in tomato abundance in September, which is the time that many of us start our canning projects.

But tomatoes that we get at our local farmers’ markets are not the norm. Much of the $5 billion tomato industry in the United States focuses on providing tomatoes to consumers year-round. This consumer demand comes at a steep price; supermarket tomatoes are usually tasteless, artificially ripened, and picked by farmworkers who are treated unjustly and exposed to extreme levels of pesticides.

Join us for the next Kitchen Table Talks in San Francisco where we delve into the story of tomatoes, including labor rights and the successes of the Campaign for Fair Food, heirloom varieties of tomatoes, and a discussion about tomato research being conducted at the University of California, Davis.

Joining us for our panel discussion will be:

Fred Hempel. Hempel is the owner of Sunol-based Baia Nicchia Farm & Nursery, known by chefs, home gardeners, and tomato enthusiasts for their large variety of heirloom tomatoes. The farm, on San Francisco Water Department land in Sunol, is host to over 100 varieties of tomatoes that have been grown specifically for the many microclimates of the San Francisco Bay Area.

Damara Luce. Luce is the national coordinator of Just Harvest USA, and worked and lived in Immokalee, Florida for over seven years, working closely with the Coalition of Immokalee Workers to bring to light the injustices of tomato farming in Florida. She aims to build a more just and sustainable food system with a focus on establishing fair wages, humane working condition, and fundamental rights for farmworkers.

Emma Torbert. Torbert is a post-graduate fellow working at the Agricultural Sustainability Institute at UC Davis, and works there on the Russell Ranch project, a farm where 180,000 pounds of processing tomatoes are grown each year for research purposes. Through the Russell Ranch project, data is being collected on different varietals, trends in yield, nutritional content, environmental impact, and efficiency in use of water.

Kitchen Table Talks is a joint venture of CivilEats and 18 Reasons, a non-profit that promotes conversation between its San Francisco Mission neighborhood and the people who feed them. Space is limited, so please RSVP. A $10 suggested donation is requested at the door, but no one will be turned away for lack of funds. Seasonal snacks and refreshments generously provided by Village Market, Bi-Rite Market, and Shoe Shine Wine.

Jennifer Maiser is an advocate for local and sustainable food. She is the editor of the Eat Local Challenge, which was founded in 2005. The site was one of the first online resources to support those looking to eat locally. Read more >