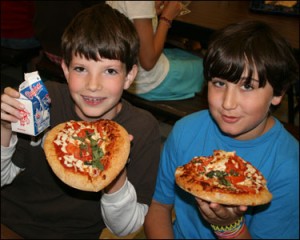 It’s a big day for the farm to school movement. At the 2011 School Nutrition Association national convention in Nashville today, Agriculture Deputy Secretary Kathleen Merrigan announced a comprehensive, groundbreaking report on the current state of farm to school efforts around the country. Download the full report here.

The data in the report was complied by the USDA Farm to School Team (comprised of both Food and Nutrition Service (FNS) and Agricultural Marketing Service (AMS) staff), which made visits to 15 school districts (over what time frame) in a wide range of states. Merrigan spoke with Civil Eats earlier today about the findings and how it might shape the farm to school landscape of the future.

What inspires you about this report?

It’s pretty exciting when students are getting really fresh food. It’s a time when the USDA has released a new dietary guideline and a new food icon and we’re really promoting the idea that half of the plate be filled with fruits and vegetables.

It’s also good for farmers’ bottom lines, economically. Particularly for that struggling mid-size commercial farmer, who could really use a local institutional buyer. We’ve seen it make a difference in their viability in a number of states where farm to school has taken off.

Lastly, I think it’s really important for kids to get reconnected to agriculture. It’s one of my themes; I talk about it all the time. Too many Americans are far removed from how their food is produced, and by whom, and they have a lot of questions. Farm to school is in a suite of strategies that USDA is employing to reconnect consumers to where their food comes from.

Farm to school has taken off regardless of what the USDA does, because there’s real enthusiasm around the country for it. Do we know how many schools are implementing these programs and how much produce they’re actually getting on students’ plates? The Farm to School Network Web site has more stats, but as of 2010, there were around 2,000 farm to school programs.

We would like to know more about these programs, so today at the School Nutrition Association convention (where 4,500 school district people are gathering), I’m announcing a national survey to gather baseline data on farm to school. And I’m going to be asking for 100 percent participation in the survey.

What do you hope the take home message is for folks in school districts from this report?

We’ve heard that people are enthusiastic about farm to school–that there are a lot of wins for farmers and students. But we’ve also heard consensus about the challenges: Around funding, around how to procure locally grown food, around how to ensure food safety standards are met, and how to incorporate better salad bars in schools in a way that counts for reimbursable meals. There are a lot of barriers, but none of them are insurmountable. What this shows me is that there really is a pathway forward to expand farm to school in a big way. None of the barriers in this report are deal breakers.

I have two thoughts about that. First of all, farm to school can’t be an isolated exercise; it needs to be supplemented. That’s why the Know Your Farmer, Know Your Food initiative is so important, because we’re investing in things like food hubs. Giving farmers access to light processing and value-added facilities makes it so that it doesn’t all fall on school personnel. Later today, for instance, I’ll be visiting an incubator kitchen in Nashville for value-added products that the USDA has invested with one of our big grants.

We also have the Let’s Move initiative. This report says people lack training, so the First Lady is pairing chefs with schools and a lot of that’s around culinary training in cafeterias, because some of it is just getting more familiarity with how to use knives.

Some of the most creative discussions I participate in focus on how to make the lunch room not just a place to consume the meal, but also an educational component in the school day. Jose Andreas, for instance, one of the chefs in Washington, is talking about trying to make the school meal a science experiment and considering it part of the curriculum. How do we rethink school meals so it’s not just time off from school, but really an inherent part of school?

The report mentioned two laws–the Farm Security and Rural Investment Act in 2002 and the Child Nutrition and WIC Reauthorization Act of 2004. Both were to have supported farm to school efforts, but neither was actually funded in the appropriations process. Given the current budget constraints, what is the likelihood we’ll see these latest efforts get funded?

There is a grant program for farm to school in the Healthy, Hunger-Free Kids Act that passed last fall and that funding would become available next year. But you’re right, we can’t bet the ranch on it because we are in difficult budget times. I’m anticipating we’ll have that new money, because it seems to be a priority for everyone, including Chairwoman Debbie Stabenow (the chairperson of the Senate Agriculture committee) who sponsored the original bill.

That said there’s a lot we can do without new money, by better aligning the bureaucracy. We need to be better on our own federal procurement policies. Today we’re announcing a new pilot program focused on purchasing locally grown fruits and vegetables in both Florida and Michigan. We want to allow school districts to put in their contracts with their distributors that they want local purchasing. We’re trying to really re-examine our own bureaucracy and see how we can make it easier for people to engage in farm to school effort. 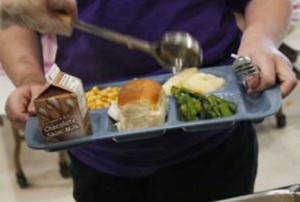 If a school is bringing in a little spinach or broccoli–a few items at a time–it’s one thing. But if this were to really grow, do you anticipate any backlash from the few large companies that currently supply most of the food that ends up in school lunches?

Time will tell. Right now the school nutrition community and all the vendors in the school meals programs are facing challenges from a variety of quarters. The Healthy, Hunger-Free Kids Act is requiring a serious upgrade in nutrition standards. People are trying to figure out how do they meet these lower sodium and lower fat guidelines, and increase the quantity of fruits and vegetables? We are really in a transformative moment here in school meals; this is the first serious upgrade in nutrition standards in over 15 years, and the first real increase in the reimbursement rate for a very long time.

There are a lot of moving parts right now and everyone recognizes our dual problems of childhood hunger and obesity. Everyone recognizes from all the conversations that I have from every political perspective and every industry perspective that we have to change. It’s a national imperative. People are trying to figure out how to retrofit their businesses. I mean you even have Wal-Mart trying to retrofit their distribution system to move to a local distribution model. To some extent, corporate America will follow what people want and the customers are speaking pretty loudly on the need to reform school meals.

Who will be getting this report and what will happen now?

The report is on the Farm to School Web site as of today. We’re announcing the survey and the procurement pilot in Michigan and Florida and we’re releasing an annotated bibliography on farm to school today that the National Agriculture library has been working on.

I think that suite of efforts,  and the fact that I’m at the School Nutrition Association gathering speaking to 4500 people, says it’s a real coming of age and a seal of approval from USDA. Farm to school is here to stay.

The above photo is from the USDA Farm to School website.