The Food Revolution Has Been Televised | Civil Eats

The Food Revolution Has Been Televised 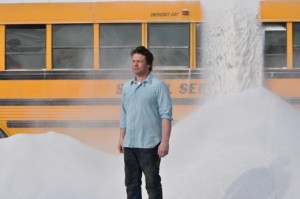 This spring on national television, British celebrity chef, restaurateur, and food system revolutionary Jamie Oliver filled a school bus with sugar.* The white stuff poured over seats and out of windows, piling into three foot drifts outside the bus as a handful of school parents looked on, speechless. The sugar represented the total amount in Los Angeles Unified School District’s (LAUSD) milk every week. “Yeah, I’m trying to make it dramatic!” Oliver shouted, “Because I want people to care!” Oliver was dismayed that more parents weren’t there to witness the stunt. “Maybe coming to LA was a big mistake,” he lamented.

Oliver’s crusade for better school food began in England, where he got £2 billion voted into the budget for cooked from-scratch meals in 2005. Last year he launched Jamie Oliver’s Food Revolution in the U.S., accompanied by an ABC television series filmed in small-town West Virginia that went on to win an Emmy for Outstanding Reality TV Program. For this year’s season of Food Revolution Oliver had hoped to film inside cafeterias and a large food processing center in the LAUSD. But he was blocked by the school board, or more specifically, Superintendent Ramon Cortines.

To hear the media tell it Jamie Oliver has had a rough year. In addition, some food activists have been critical of Oliver’s show and methods. But to see 2011 as a failure for Oliver is to miss the point of his mission. It’s not to dominate American television ratings or even to directly influence food policy. Oliver’s mission is to ignite and expand an army of food revolutionaries in the U.S. who will drive change themselves. With the full force of his celebrity and national exposure he continues to be spectacularly effective in recruiting food activists.

Oliver found a way to work around the LAUSD and struck a deal with West Adams Prep, a school run in partnership with LAUSD and educational nonprofit MLA (or Mentor LA). MLA CEO Mike McGalliard brokered a very delicate arrangement through which Oliver could teach, and film, a small cooking class at the school.

Every episode was fraught with conflict over this arrangement, with permits and permission being revoked often at the last moment, much to Oliver’s growing frustration. Eventually he was shut out of even West Adams, though he did still manage to set up a kitchen classroom within walking distance to the school and arranged for Better Homes and Gardens to install a garden at the school–not on film, of course. Meanwhile, at a school board hearing, Ramon Cortines declared that he was the one behind all of Oliver’s setbacks, not the school board. Cortines claimed he wanted to shield his schools from ridicule and controversy; Oliver saw this as belligerent obstruction.

Finally, near the end of the season, Cortines’ term expired and a new Superintendent was elected, John Deasy. An LA Glasnost was ushered in as Deasy met with Jamie Oliver–on Food Revolution and on Jimmy Kimmel–and promised to propose to the board that LAUSD schools drop flavored milk. His proposal passed with only one dissenting vote and as of this month flavored milk is a thing of the past in LA. It helps that the milk contract was up for renewal this summer. Picking a well-timed campaign with an unambiguous goal proved to be a smart gamble–and a sharp strategy.

Alas, this story played out in real time ahead of the plot of Food Revolution as it was broadcast. After letting Food Revolution try the high-profile Tuesday night time slot, ABC put Food Revolution on hold for May Sweeps from April 19-May 24 and then moved the show to Friday nights, where it continued to lead. Meanwhile, the flavored milk victory came (around April 27) while the show was on hiatus, leaving supporters with no show to rally around in celebration.

However, food bloggers like Bettina Elias Siegel of The Lunch Tray began an earnest debate over whether banning flavored milk is really the right thing to do. What if kids stop drinking milk? Is this the best use of our energy? The national food movement fractured over the flavored milk ban, just as it fractured over the 2010 Child Nutrition Bill and the big organic/small organic debate. But for the fans and viewers of Food Revolution the milk victory wasn’t an just an endgame about flavored milk in LA; it was a key motivating win that has encouraged them to remain engaged in the fight with the hope of making similarly profound change happen in their own communities–and maybe someday on a national level.

“Who the hell does this guy think he is?” This is a sentiment I have heard about Oliver from organizers who have long had their noses to the grindstone. Grassroots-level progressives tend to be suspicious of the power of celebrity, of big budgets and corporate sponsorships, and of anything that hints of emotional manipulation. Oliver has been scolded for demanding change of people stuck in the middle, school nutritionists, cafeteria workers, small restaurant owners, instead of taking on Congress or Monsanto. He has been taken to task for glossing over important details, like the hundreds of thousands of dollars’ worth of funding that backed up the glorious transformation of Santa Barbara school cafeterias featured in an episode.

But Oliver is relevant because he brings the big food fight to a national audience. 7.5 million people viewed the Emmy-winning first season of Jamie Oliver’s Food Revolution last year. This year’s six-episode season had nearly as many viewers at its peak. Over 700,000 people have signed his Food Revolution petition demanding “better food at school and better health prospects” to be delivered to the U.S. President. And Oliver persuaded 25,000 people to comment on the new USDA school food standards.

The truth is, Jamie Oliver is a showboat, but that’s a powerful asset. His show sometimes sacrificed absolute transparency for the sake of effective storytelling (bloggers and tweeters filled in those missing details anyway). But we need those compelling narratives, visuals, and experiences that dig into Americans’ hopes and fears, our hunger and disgust and pride. Oliver’s hugs and calling people, “my brother,” and constant appeals to emotion are, like it or not, apparently highly effective. We need charisma and connection. And yeah, a bit of celebrity magic doesn’t hurt, either.

Again and again Oliver starts with a cooking lesson, and somehow that lights a fire in an individual, and they begin to see how that food in the pan connects with a larger system that had previously obscured their path to healthy living. This is the mission of the Food Revolution: light a fire under our asses and get us to make change ourselves.

The next chapter in the Food Revolution saga is to deploy Oliver’s Big Rig Teaching Kitchen, a mobile classroom hatched from Oliver’s TED prize wish, where hopefully some 2500 kids throughout southern California will get life-changing cooking classes. Big Rig is operated in partnership with the California Endowment, (whose Building Healthy Communities initiative will provide support for the instructors) and will be working with community organizations throughout the Los Angeles area, starting with Challenger Boys and Girls Club.

Now it’s up to us to capitalize on the momentum and energy of the Food Revolution. How do we connect it with larger battles? How do we keep telling compelling stories? What novel methods can we use to connect with more people? As Jamie Oliver says in the season finale, “We’ve all got to start stirring the pot. And we’ve all got to start expecting more.” Those of us who have already been working in the food movement, on the other hand, already expect much–what we need to do is take a page from Oliver’s book and get more creative and daring in communicating our vision.

*Not actually sugar, but pale sand that resembled sugar.

Watch this year’s episodes of the Food Revolution in LA here.