Cheese Board Collective: 40 Years in the Gourmet Ghetto | Civil Eats

Cheese Board Collective: 40 Years in the Gourmet Ghetto 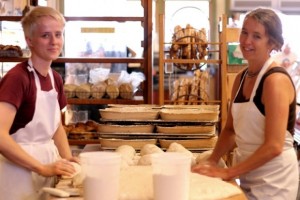 Exploring alternative ways to work in the food industry is a hot topic. Recently in San Francisco a sold out Kitchen Table Talks, a monthly panel showcasing local food folk, featured a discussion about successful edible enterprises that haven’t started the conventional route.

Two of the four panelists hailed from Berkeley. Three Stone Hearth‘s Jessica Prentice, whom I’ve previously profiled on Berkeleyside, talked about her cooperative kitchen model. Cathy Goldsmith represented The Cheese Board Collective. (San Francisco business reps in the mix: Caleb Zigas, who runs the kitchen incubator program La Cocina and Anthony Myint, the restauranteur behind Mission Chinese Food and Commonwealth, both eateries give big chunks of change to charity.)

Beyond the obvious culinary connection each business is unique. What they have in common? A desire to build community—of workers, artisans, and customers—around their real food ventures.

Case in point The Cheese Board Collective, which has served as an anchor institution in what’s known as Berkeley’s Gourmet Ghetto for more than 40 years.

Goldsmith, who has a restaurant background, has been a worker-owner at The Cheese Board for 16 years. She likes to say that the collective got going “back in the day” and people who work there do  everything “from soup to nuts.” What that means is the 52-year-old finds herself serving cheese one day, rolling out dough the next, dealing with health insurance and other human resource issues on another, along with stocking bread bags, sweeping floors, and scrubbing toilets.

Goldsmith also tends to do the collective’s media outreach, though she declined to be photographed for this story because, perhaps fittingly for a collective owner-worker, she wanted the spotlight on the group, which numbers more than 45, not on any one individual. The Cheese Board opened in 1967, when revolution was in the air, in the slip of a space that now houses The Juice Bar Collective. On the first day of business original owners Sahag and Elizabeth Avedisian grossed less than a hundred dollars after an initial investment of just a few hundred dollars on cheese. The couple began selling a selection of high-quality cheeses in stark contrast to the massive orange blocks wrapped in plastic that passed for American cheese then. 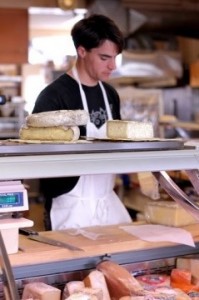 How times have changed. And we’re not just referring to the fact that worker-owners no longer streak naked across the median strip (as they did, legend has it, “back in the day.”)  Today, the store sells some 300 to 400 goat, sheep, and cow milk cheeses from all over the world, including many artisan American offerings. The store is also beloved for its trademark sourdough baguette and assorted baked goods, such as scones, muffins, cookies, and chocolate things, as well as focaccia, rolls, challah, and other breads.

The Avedisians, who had worked on a kibbutz in Israel, wanted to run a democratic shop where all the workers were owners and shared the wealth. So in 1971 the couple converted the business to a collective, bringing their six employees into the fold as equal partners. To this day, a new employee earns the same hourly pay as one who has been with the cooperative since the beginning. Elizabeth Avedisian, now in her 80s, still does two shifts a week at the store, without fanfare. Her ex-husband Sahag, who left the collective and the Bay Area years ago, passed away in 2007.

Over time, batches of freshly baked bread were added to the shop’s repertoire, followed by pizza in 1985. The store moved from its original location on Vine Street to its current Shattuck Avenue spot in 1975. It has expanded twice since then. In 1986 the collective acquired the space vacated by Pig-by-the-Tail Charcuterie, which now houses the pizzeria. In 1990 the group expanded when the fish market next door went out of business.

The Cheese Board Pizza Collective operates as its own business, though the pizzeria and the cheese store share the same corporate by-laws. Wholly owned by its members, the business is incorporated for tax and liability reasons. All members have equal say in business decisions and are eligible for the same benefits. Profits are used to buy new equipment or maintain existing infrastructure, raise wages, and contribute to retirement funds. In keeping with the collective’s left-wing, pro-labor politics, the store is closed on May 1st,  International Workers’ Day. The collective with a social justice conscience routinely donates food to places that feed the needy, including Food Not Bombs and hands out free sandwiches to the homeless.

Goldsmith declined to give hard numbers on the store’s financial health, saying simply that business is “fine.” She pointed to the heady dotcom days of the early 2000s as particularly good times. Over the decades, the store has weathered varying nutritional whims where bread and cheese are concerned, including the Atkins diet, carbo-loading, and low-cholesterol regimens, along with fluctuations in the commodity markets for dairy, flour, and corn, which impact their operating costs.

The Cheese Board has nurtured other food collective, and spawned another baked goods and pizza cooperative called Arizmendi Bakery in Oakland in 1997. The Cheeseboard crew, which wanted to promote their way of doing business without expanding into franchises, shared all its recipes and even its sourdough starter with this nascent bakery. Since then four other Arizmendi stores have opened their doors in the Bay Area. 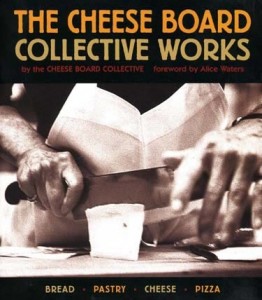 In 2003, with the release of The Cheese Board Cookbook: The Collective Works, the counterculture entrepreneurs shared their popular recipes with the public.

Goldsmith, who lives in Central Berkeley, offers other examples of the collective’s community-mindedness. On a day of protests against the U.S. invasion of Iraq in 2003, during the tenure of George W. Bush, the collective voted to close the store—on a Saturday no less, the busiest day of the week. Instead, members baked mini scones and made peace signs from dough and set up shop outside the North Berkeley BART station, where they dispensed the baked goods for free to residents on their way to the march. Once the scones were all spoken for, they headed to the anti-war rally themselves.

When the September 11, 2001 attacks happened, people spontaneously started pouring into the store, said Goldsmith, not to buy cheese, just to be together during a very dark day. Likewise, the store showed its support in 2008 for then-campaigning Barack Obama by offering specials on “swing state” cheeses.

Such community kindnesses and civic engagement is rewarded by a loyal clientele. In 2007, the group celebrated its 40th year at a dinner at Chez Panisse, which celebrates its own 40th next month. The chefs volunteered their time, and Alice Waters refused to accept payment for the meal, Goldsmith told the Kitchen Table Talks crowd. It was Waters’ way of giving thanks for the thriving business across the street on Shattuck Avenue that paved the way for others, like herself, to set up budding food businesses in an area now dotted with restaurants, cafes, and fine-food purveyors.

Collectives, of course, are not for everyone. Some people chafe at the thought of endless monthly meetings, committee work, and making decisions by modified consensus.

It took about three years, for example, before the store allowed credit cards; the pizzeria only recently accepted plastic as payment. “We didn’t want to encourage people to live beyond their means, something that credit cards make it easy to do,” explained Goldsmith. “But then we put out a cookbook and it cost a chunk of money and we felt like it wasn’t really any better sending moms with strollers in the rain to get money out of the Bank of America ATM.”

Even the cookbook initially encountered some opposition within the ranks; collective members aren’t big on blowing their own horn it seems. Likewise the early morning coffee and pastries set up was fiercely debated at first; though it has proved a big hit with locals starting their day.

The collective operates much like a family, dysfunctions and all. They may argue about change but at the end of the day they’re all in it together. Members have an annual bouillabaisse party out at Point Reyes and a disco ball in the store is a remnant from a New Year’s Eve party, where the floor was cleared and members danced like, well, it was 1999. Goldsmith says she routinely listed the store as the emergency contact on her son’s school forms.

The chatty Cathy is the final food purveyor people meet on the Edible Excursions Gourmet Ghetto tour on Thursdays (which this writer sometimes leads). She is a warm and welcoming presence, as she greets guests from near and far into the collective’s kitchen, where, more often than not, Dan the Baker is loading English muffins into the oven.

From this vantage point, Goldsmith walks people through the iconic institution’s colorful history, all the while offering samples of cheese, bread, and other goodies. Her enthusiasm for her place of work and how it’s run in full view.

A version of this post originally appeared on Berkeleyside and on Lettuce Eat Kale.