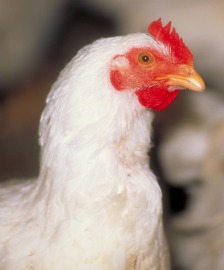 The goal of The HSUS is not endless campaigning or conflict with political adversaries, but to find a place where we can forge solutions that produce tangible and meaningful outcomes for animals and show a new way forward in society. And that means sitting down with people who see the world differently than we do, even sitting down with industries that we’ve had deep disagreements with in the past.

Yesterday, we put that principle into practice. I participated in a press conference that I thought could only occur many years into the future: a joint event with The HSUS and the United Egg Producers (UEP).

The UEP is the primary trade association for the egg industry, and we’ve been at war with them over the extreme confinement practices in the industry—specifically, the confinement of laying hens in barren battery cages. We’ve supported bills in legislatures, ballot measures in the states, and litigation in the courts to make our case and to demand better living conditions for laying hens. With more than 260 million hens caught up in extreme confinement systems, we knew there was a lot at stake.

Yesterday, with the leaders of UEP at my side, I announced an agreement between the two organizations to mark the beginning of the end of the era of barren battery cages in America. The agreement, by calling for a national labeling program for all eggs sold in commerce, also promises to provide consumers with more information on the production practices used by egg farmers. This historic agreement calls for a series of reforms to be put into place in the years ahead that will demonstrably improve the lives of laying hens.

There’s currently no federal protection for chickens used for food at all, and no protection for any farm animals during production (there’s a federal humane slaughter law only, and even it applies only to mammals and not to birds). With this agreement, I have great hope that may soon change.

In short, the proposed legislation that HSUS and the UEP will work to enact would:

Some of the provisions will be implemented nearly immediately after enactment, such as those relating to molting, ammonia, and euthanasia, and others after just a few years, including labeling and the requirement that all birds will have to have at least 67 square inches of space each. (Currently, approximately 50 million laying hens are confined at only 48 square inches each.)

In exchange, we’re putting on hold our efforts to qualify and pass ballot measures in Washington and Oregon, and redirecting our resources to pass a new federal law that would improve the treatment of the hundreds of millions of laying hens in every state. The initiative process is not available to us in more than half the states, and many of the biggest egg-producing states don’t allow the process; that’s why it’s been so critical to forge a national solution, with federal legislation to set the standards for all egg producers.

For many years, I’ve hoped that we’d no longer have to fight state by state, and that the egg industry would agree to these kinds of important reforms. I’m grateful to the UEP for showing leadership and foresight in endorsing such legislation. I’m also grateful to the countless volunteers and staff of groups like The HSUS, Farm Sanctuary, and the ASPCA, in states like California, Washington, and Oregon, who put us in a position to negotiate this landmark agreement.

Congressman Earl Blumenauer had the best sum-up of the day:

“This agreement serves as an excellent example of what can happen when everyone comes to the table ready to work,” he said. “I commend both the Humane Society of the United States and the United Egg Producers for their hard work, and hope that the two parties here in Congress can learn from their example about what real compromise is.”

Originally published on A Humane Nation