Sustainable and Adventurous Eating with The Perennial Plate | Civil Eats

Sustainable and Adventurous Eating with The Perennial Plate 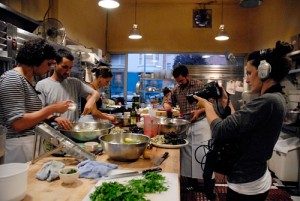 Season one of the good grub chronicles introduced video viewers to a year of food finds in Minnesota, a state that Klein and Fine used to call home. Klein wants people to see where their meat comes from, so he documents rabbit, pig, and turkey killings, along with deer hunting, squirrel slaughtering and bison butchering, often set to a haunting soundtrack. For the more squeamish among us, there’s also cranberry harvesting, morel mushroom gathering, and wild food foraging, typically accompanied by more uptempo tunes.

In season two, which began in early May, the culinary couple took their show on the road for a six-month journey across America in search of stories (and the people behind them) that speak to the heart of food and farming practices in the nation. To date their eating expeditions have led them to harvesting produce in urban farms in New Orleans, hunting feral pigs in Texas, and catching frogs in Arkansas.

Read Henry’s interview with Klein and more about the show at KQED.

Watch episodes of The Perennial Plate here. For a taste, watch: