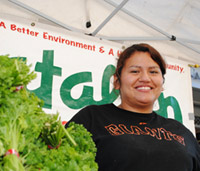 Ana Catalán may seem young, but don’t let this 23-year-old fool you; when it comes to farming, she’s wise beyond her years. As the youngest child and only daughter of María Catalán, matriarch and owner of Catalán Family Farm, Ana plays a crucial role in the workings of this Hollister-based organic farm.

“I am basically trained to run the business right alongside my mother,” she said on a recent Thursday at the Ferry Plaza Farmer’s Market, while waiting in line at the Blue Bottle kiosk for her second (or was it third?) soy latte of the day. Anna’s three older brothers all work for the farm as well—one manages restaurant relations and orders while the other two sell produce at farmers markets for a commission—but, as Ana sees it, “together, my mother and I are the brain of the business.”

Being the brain of the business generally means working seven days a week, either at a market, in the office, or around the 15-acre farm. It’s not a lifestyle Ana shares with many other people her age. “I honestly only have close friends, because they understand that my job consumes my life,” she said.

When it comes to co-supervising the farm’s crew of workers (a group that ranges in size from six full-time people in December to 40 part-time workers in the summer harvest months), Ana takes cues from her mom. Once a farmworker herself, María graduated from the Agriculture and Land-Based Training Association (ALBA) over 15 years ago and has run her own organic farm ever since.

But getting established as a woman farmer (and single mom) wasn’t easy; many in their extended family were skeptical. “People did not value organic farming as they do now,” recalled Ana. “It was a hard time. My mom knew how to farm, but she didn’t know about marketing. She invested a lot and lost a lot.”

Throughout it all, the drive to treat workers with respect has remained central. “My mom tries to be the best boss that she can be,” said Ana. “She says, ‘I’d rather pay my last dollar to my worker than pay myself.'” Like on any farm with a shifting, seasonal workload, retention can be a challenge. But, Ana said, “No one who has ever worked for us hasn’t wanted to come back.”

Not that it’s easy supervising people twice your age. Ana is a social person and she says it took her a while to figure out how to draw the line between work relationships and personal ones, since she spends so much time at the farm. “I tell them, ‘Once we’re working I’m your boss; off the clock I’m your friend. That stays there and the job stays here. Don’t think I’m going to mix it up.’ But I started so young—it took me a long time to figure this out,” she said. 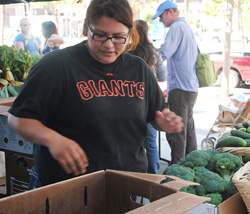 Ana has been coming to the Ferry Plaza since she was 19; these days she runs the Catalán booth on Thursdays and Saturdays, along with one or two other markets in San Francisco. And although the drive from the farm can be grueling at times, she loves coming to the city for its exciting mix of people, food, languages, and cultures. “I started off doing markets in Berkeley. It was fun; but the City has my heart.”

It’s hard to say which came first, Ana’s love of San Francisco or her sense of independence, but there’s no doubt the two things are related. Last year, Ana moved off the farm to an apartment in San Jose with friends–a decision that requires her to drive 45 extra minutes every day (on Saturdays, it means she often leaves her house by 3 am).

“I was the first in the family to move out. In my culture, for a woman to be out of the house, unmarried, and without children…it’s a big deal,” she said. But Ana held her ground. “I’m the only one of my cousins who didn’t get pregnant in high school. I do want to get married and have children some day, but I want my kids to be raised in the home that I choose.” She’s had to have “a lot of sit-downs” with members of her extended family, who like to say she’s become too Americanized.

Since graduating from high school Ana has taken classes at several different community colleges in Gilroy and the Salinas area. But, in the end, it’s always hard to prioritize because the farm has to come first. On the bright side, she said, dealing with family politics primed Ana for her favorite class: Political Science. She thinks often about moving in with relatives in Southern California in order to get just far enough away from the farm to focus on finishing her degree. But for now, it’s hard to leave a family that depends on her (“everyone knows me as Maria’s daughter…I’m her Junior.”) and a job she loves.

“There’s just something about the farm when you’re harvesting. The work that you’ve done has paid off and you get to see the fruit of your labor, literally,” said Ana. “I like waking up before sunrise and going out on the field. The air is so fresh; it’s really beautiful out there.”

On top of growing vegetables, Ana has also been planning to expand on a canning experiment she started last fall; “I want it to be like Happy Girl Kitchen, but Mexican,” she says. And no matter what happens next, it’s clear that Ana enjoys being at the helm of the farm she’s built alongside her mother.

“When I was 13 I was so embarrassed to tell my friends that I had to get dirty and help in the fields. I didn’t want them to think I was just another farmworker.” Now, she said, “they’re all like, ‘Can you hook me up with a job?’”