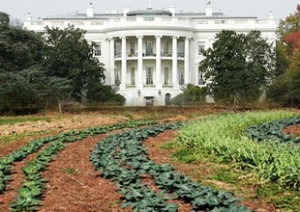 Poor Uncle Sam’s got a lot on his plate these days: a curdled economy, an overcooked climate, a soured populace. It’s enough to give a national icon a capital case of indigestion. Anti-government sentiment is running so high that half the country seems ready to swap his stars and stripes for tar and feathers.

Sure, Uncle Sam’s always been kind of a drag, with his stern face and wagging finger. But to “nanny-state” haters, he’s a Beltway busybody in drag, democracy’s Mrs. Doubtfire, a Maryland Mary Poppins. If you believe that government is always the problem, never the solution, then you have no use for, say, more stringent food safety regulations, or Michelle Obama’s “Let’s Move!” campaign to combat obesity.

But the new exhibit “What’s Cooking, Uncle Sam? The Government’s Effect on the American Diet” at the National Archives in Washington, D.C. offers an intriguing display of documents, posters, photos and other artifacts dating from the Revolutionary War to the late 1900s which serve to remind us that our government has long played a crucial role in determining how safe, nutritious and affordable our food supply is.

So, after all this government-mandated meddling with our meals, do we eat better now than we did 100 years ago? Curator Alice Kamps didn’t set out to provide a definitive answer to that question. Her intent was simply to “add to the conversation” that we’re currently having about how Americans eat.

Kamps gives us plenty of fodder for discussion, if not heated debate; the exhibit, which runs until January 3, 2012, treads gingerly around hot-button topics like crop subsidies and factory farming. And it sidesteps the food stamp land mine entirely in an era when the very word “entitlements” is enough to make some folks’ heads explode.

That’s a shame, because there’s a little-known aspect to the Supplemental Nutrition Assistance Program (SNAP), aka food stamps, that encourages self-sufficiency and complements the kitchen garden revival that gets a shout-out in this exhibit, thanks to Michelle Obama and White House chef Sam Kass.

The 1973 Farm Bill included an amendment to the Food Stamp Act that enabled food stamp recipients to use their stamps to buy seeds or vegetable plants. As any gardener knows, a few dollars worth of seeds can yield a return of $50 or even $100 worth of food. Senator James Allen of Alabama, who proposed the amendment, noted that “the recipients of food stamps would thus be able to use their own initiative to produce fruits and vegetables needed to provide variety and nutritional value for their diets.”

The program continues to this day, but remains largely unknown, so few food stamp recipients avail themselves of this chance to literally grow their benefits at no extra cost to Uncle Sam.

Missed opportunities aside, “What’s Cooking, Uncle Sam?” does a fine job of documenting just how consistent our issues with our food chain have stayed even as the way we eat has changed radically over the past century. Consider the following nugget of dietary wisdom from the first federally funded nutrition research, launched in the 1890s. Wilbur Olin Atwater, special agent in charge of nutrition investigations in the Office of Experiment Stations, concluded:

“The evils of overeating may not be felt at once, but sooner or later they are sure to appear–perhaps in an excessive amount of fatty tissue, perhaps in general debility, perhaps in actual disease.”

We knew it then, we know it now. And yet, we eat more than ever, egged on by a schizophrenic USDA whose dual missions–encouraging healthier eating habits and promoting the interests of the food industry–are in eternal conflict.

Check out the USDA’s 1945 Food Group Poster (a precursor to the Food Pyramid, which debuted in 1992). A pie chart lays out “The Basic 7” food groups we should eat from each day for optimal health. Below it lies the message, “In addition to the basic 7, eat any other foods you want.”

No wonder Uncle Sam looks so pained; he’s been getting his arm twisted by lobbyists for nearly 100 years. Take the case of the seed giveaway program Congress created in 1839. The original purpose of the program was to expand the range of foods our farmers grew and encourage them to test rare plant varieties. By 1897, the USDA was distributing 1.1 billion free seed packets to farmers, many of them more common vegetable and flower varieties.

The program was wildly popular with farmers, but a thorn in the side of the growing commercial seed industry. So, in 1929, after intense lobbying from the American Seed Trade Association, Congress scrapped the seed giveaway.

The exhibit does highlight Uncle Sam’s more laudable legacies, such as the passage in 1906 of the Pure Food and Drugs Act and Meat Inspection Act, and the establishment of the School Lunch Program in 1946, which has since become “one of the most popular social welfare programs in our nation’s history,” according to the exhibit catalog. Geez, if that’s how we fund our most popular programs, I’d hate to see what kind of resources we allocate to the ones we like least.

“What’s Cooking, Uncle Sam?” strikes a nice balance between the wonky, somber food policy and safety segments and more lighthearted elements such as White House menus featuring favorite presidential recipes and those classic wartime propaganda posters encouraging us to can, garden and conserve. Other visual treats include the beautiful botanical illustrations commissioned by the USDA in the late 1800s to document the discoveries of the plant hunters we dispatched to far-off lands in pursuit of new fruit and vegetable varieties.

One of our more notable agricultural explorers, the intrepid, fur-hatted Frank N. Meyer, introduced us to some 2,500 new plants, including the lemon that bears his name. Meyer walked hundreds of miles through China at the turn of the century in his quest to “skim the earth in search of things good for man.”

Now, we outsource the task of finding horticultural breakthroughs to corporations whose motto could be “to scorch the earth in search of things bad for man.” Uncle Sam doesn’t commission botanical illustrations or promote rare seeds anymore, either; for that, I have to rely on my friends at the Hudson Valley Seed Library. Kicky propaganda posters? Back to the private sector–see Joe Seppi’s brilliant Victory Garden of Tomorrow posters on Etsy.

Uncle Sam hasn’t got the time or the budget for such extracurricular activities these days. He’s got his hands full just trying to maintain our food chain’s mediocre status quo. As Mark Bittman noted, Republicans are on a tear to gut vital food safety and nutrition programs in the name of deficit reduction. Nevermind that the programs in question actually save us billions of dollars in health care costs in the long run. What’s cooking, Uncle Sam? Off the record, he’d probably tell you that what’s cooking is our goose.