Organic in Cuba: Something from Nothing | Civil Eats

Organic in Cuba: Something from Nothing 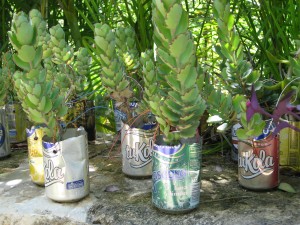 There’s a scene in Terry Gilliam’s 1991 movie “The Fisher King” in which a man plucks the discarded wire cage from a champagne bottle off a pile of garbage bags as he walks down a New York City street with a woman he is trying to impress.  He fiddles with the wire in his hands as they walk, eventually holding up what looks like a delicate and beautiful little metal chair, fit for a dollhouse. “You can find some pretty amazing things in the trash,” he says to her.  She is smitten.

That transformation of a piece of trash into a thing of beauty transfixed me then, and still does.  When I traveled to Cuba a few weeks ago, on a food sovereignty study trip with Food First, I had the opportunity to be transfixed again and again.

Some of the things I saw there included: the discarded front grill to an old electric fan used as a hanging planter with just three chains and some burlap lining; liquid humus packaged in old Havana rum bottles and sold at a farm supply and consultation site; soda cans at an educational farm center cut to be planters for small succulents; an old cooking oil tin at a community garden turned sideways, sliced open, and planted with herbs; raised beds created with upturned spent liquor bottles; and a chicken coop on a family tobacco farm cobbled together from scrap wood and metal.

Everywhere we turned we saw materials whose natural life was being maximized, extended. I joked to my fellow travelers to watch their water bottles–if it ain’t nailed down, it might become a planter. An image flashed through my mind: the corner deli in New York City (my hometown) where with a sandwich order one is given a stack of 30 napkins and a set of plastic cutlery she’ll never use. What would a resident of Havana think? 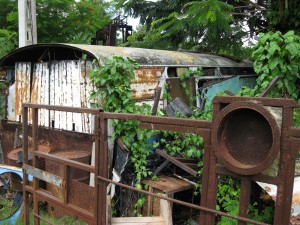 This Cuban thrift is sometimes taken to an extreme, reminding me this practice is not done because it’s beautiful or quaint, but because it’s a necessity. Examples include: Styrofoam seedling planter trays are reused and reused, brown with age and crumbling at the edges; a farm carved out of a former trash dump; and earth that was a rainbow of glass and plastic shards, unidentifiable debris, the old shell of a bus—and who knows what else–nestled next to the pig barn.

After the fall of the Eastern Bloc, Cuba was left to figure out how to survive without the influx of food, fuel and other supplies that they had purchased affordably from the Soviet Union until then. The answer turned out to include the practice of a more local and organic agricultural system (fewer inputs, less fuel, more oxen), as well as an overall practice of thrift. In doing this so successfully they made survival possible. As an engineer at the Institute for Research in Tropical Agriculture (INIFAT) told us: “the best thing that could have happened to Cuba was to be forced to use sustainable and organic methods of agriculture.”

As part of this transformation, the government now runs programs that support small farmers and encourage local—and often urban—production. When we met with the PR representative from the Ministry of Agriculture, we had lots of questions about how their theory played out in practice. One person in our group asked “do you encourage people to practice seed saving?”  He responded with a chuckle: “the main concept we teach here in Cuba is saving. I’m not just talking about seeds, I am talking about everything.”

Farmers in general—whether they be in Cuba, the U.S. or elsewhere—are experienced practitioners in reducing and re-using. Financial necessity and deep understanding of the natural environment means that small-scale sustainable farmers must be magicians of a sort, from seed saving to all manner of cost saving and resource saving practices. They, like the character in “The Fisher King,” know how to make something beautiful (and delicious) out of almost nothing.

After all, isn’t the transformation of soil, seed and water into something that feeds and nourishes us—nothing into something—the ultimate expression of this?