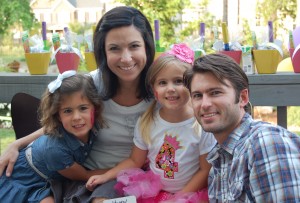 A little over a year ago, our family made a bold move by pledging to follow strict “real food” rules for 100 long days. A few of these rules included no white flour, no sugar, and nothing out of a package with more than five ingredients. And there were no exceptions whether we were traveling, out to eat, at a birthday party or with friends. We started this little experiment of ours simply to draw attention to how dependent Americans have become on highly processed food.

Just a few months prior, we ourselves had been relying on the very same factory-made junk and the scary part was we didn’t even realize we were doing anything wrong. So, after our little wake up call, thanks to Michael Pollan and Food, Inc., we didn’t think it was good enough to just make the appropriate changes within our own family. We felt compelled to share the shocking news we’d learned with others and “blow the whistle,” so to speak, on what Americans were really eating.

Once our fairly typical family in the suburbs of Charlotte, N.C. took on this extreme and sudden “real food” pledge, it led to quite a few interesting and surprising experiences. Here are some highlights:

Redefining the way we shopped for food

During the first several weeks of our real food pledge, I felt completely lost when it came to food shopping. What used to be an incredibly simple process became complex and confusing because I suddenly didn’t know where to go or what to buy. Before our real food wake up call, I’d never read the ingredients on a food label, never shopped at a farmers’ market, and never bought anything that was organic–at least not on purpose.

I used to barely even step foot in the grocery store because I did all of my shopping online. In one easy transaction I would order our food for the week then drive up to the store and wait for the personal shopper to load everything up in my car. There is no question that was easy, but I slowly had to stop going to our mainstream grocery store and instead drive all around town in what felt like a web to the farmers’ market, multiple health food supermarkets, a bakery, and a local farm for our CSA box. What was once simple, predictable, and painless was suddenly taking four times as long. But, with lots of practice and patience, I eventually become more efficient, although I of course had to start getting out of the car.

Convincing our children to embrace this new way of life

What started out as a little rough, with a severe melt down over a forbidden deep-fried donut, somehow turned into a surprising and amazing learning experience for our three- and five-year-old children. During the first month or so I constantly questioned myself over involving and restricting my children’s diets for this little experiment of ours. Here I was spending hours preparing and packing up “approved real food” just so I could take my daughters down the street to a birthday party. We suddenly became the minority and could rarely find “acceptable” food outside of our home.

But, as I saw our young daughters blossom and start to make better choices all on their own—like asking for a banana from a concession stand full of the worst junk food I could imagine–I realized I was actually doing no harm whatsoever. In fact, I was doing a lot of good by teaching my children at a young age how to make the best food choices and why. And while we’ve said time and time again, it isn’t necessarily the best approach to follow strict rules 100 percent of the time, it certainly helped us gain a new perspective so we could learn how to make the right long term changes for our family.

Accepting the response (both positive and negative) from family and friends

Our “real food” pledge” suddenly made us the minority. Here in North Carolina people are not quite as up-to-speed on the emerging real food movement as they are in other locations such as New York or California. This was the beginning of a long road in our attempt to explain what we were doing and why. Friends slowly got used to us bringing our own meals along, although I wouldn’t say they exactly embraced the idea. The jokes may have been lighthearted, but they certainly didn’t go unnoticed.

Then there were our extended family members. They may have said they were supportive, but words only go so far. When you are visiting family members from out of state and eating what they have cooked issues can and unfortunately do arise. We had been bending over backwards to abide by our strict rules for many weeks then we suddenly had to decide if we should eat the rule-breaking food or keep the peace with family. It was definitely one of the biggest challenges we faced during our pledge.

Dealing with restaurants and travel

Before starting our pledge, I got rid of every single processed food we owned. This simple act made following our “real food” pledge almost painless—when we were at home of course. Leaving our house was a completely different story. We could hardly go anywhere without plenty of preplanning including time spent packing up all sorts of “approved” food. When preparing for long-distance trips we often packed an entire suitcase dedicated to food–that I would spend days making–as well as logged many hours on restaurant and other advance research. Thanks to all of this painstaking preparation my oldest daughter and I even managed to stay in a hotel in New York City with friends–who were not on a real food diet–while somehow not breaking any of our rules! I am still amazed we did it.

At times trying to eat out at restaurants was almost a joke. It was no longer about what menu items sounded appetizing or might be in our price range, but instead it was about narrowing things down to the one or two items we actually could eat. And ordering off the kids’ menu was no longer even an option. So after multiple inquiries about what’s in this soup and what’s in that sauce we would finally make a decision and only hope that our high maintenance order didn’t entice any restaurant employees to tamper with our food.

We initially felt compelled to cut out processed food because we thought it was the right thing to do. What we didn’t expect were the plethora of positive changes we experienced to our health during the process including:

All in all, we are pleased we completed this project not only for our own personal eye-opening and educational experience, but also to help draw others’ attention to this important topic. Since the initial launch of our “100 Days of Real Food” pledge a little over a year ago our blog has had almost one million pageviews from over 160 different countries, which means our reach is far more than we could have ever imagined. To think that we are surpassing our goal of spreading the word to a few hundred friends makes every moment of this experience, good or bad, well worth it.