Pastured Eggs: What it Really Takes 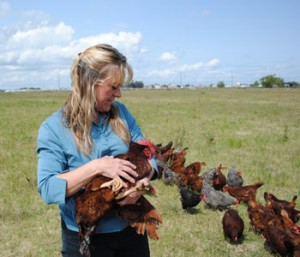 In California’s Central Valley, where Sara “Lynne” Hunt runs a small egg operation, the sight of chickens on pasture is enough to make people to pull off the road.

“People driving by will stop and ask, ‘What are those chickens doing running around outside?’” said Hunt, who has been raising hens under the name Shady Oak Organic Eggs in Turlock, California, for around six months. “It’s been really interesting because I get to educate people, and explain how much better for you the eggs are when they come from pastured hens,” she says.

Shady Oak is a side gig for Hunt at the moment, but one she’s passionate about and hopes to expand. She spends about 20 hours a week caring for 500 hens, on top of a full-time job as a real estate appraiser.

While the demand for pastured eggs has picked up in the last few years, they don’t provide an easy business model. Proliferation of large-scale industrial egg facilities have allowed even most “cage free” and organic eggs to remain relatively affordable. Pastured eggs require more labor, a healthy pasture kept green with irrigation in the summer, much more space, and (because they get a lot more exercise) the hens eat almost as much feed as their indoor counterparts. Many of these costs account for a price difference that surprises some shoppers ($6-8 a dozen, versus $3-5).

The Need for Feed

In addition to the bugs and worms they eat on pasture, Hunt provides each bird with a blend of organic, U.S.-sourced grains and legumes, as well as flax seeds and kelp. Like many ranchers, feed is her biggest expense.

“Those chickens are pigs!” She said. “I ration out their feed three ounces of feed a day for each hen.”

She charges around $7 a dozen for the eggs, and hopes to recoup enough of her costs by this winter to begin expanding the business. In addition to the long hours, Hunt was met with some significant challenges right off the bat. She had 80 chickens stolen, and although she has 200 new chicks, they will require at least five months of feed and care before they begin laying. 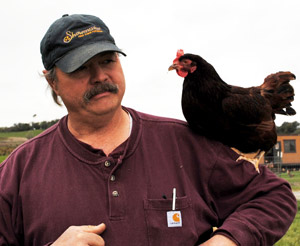 Charlie Sowell of Rolling Oaks Ranch also raised chickens on pasture. Like Hunt, he supplements his hens’ diet with feed made with U.S.-grown grains—most of which are grown “as locally as possible.” (It’s his biggest production cost, aside from his own time, and he estimates that that his 1500 hens eat around 120 pounds of it a day).

On top of raising hens, Sowell and his girlfriend and business partner Liz Sorrow, runs a feed and tack store in Ione, CA. In the store, he said he sees a direct relationship between feed and fuel. “When fuel costs go down, people will feel like they can spend a little more on feed; right now, most of them just can’t afford it.”

Sowell and Sorrow fell into the egg business one day when a customer who had ordered day-old chicks called to say she couldn’t afford to pick them up. “By the end of the year I had 35 layers,” he recalled. “They started laying, I ate the eggs, and I thought, ‘Wow! They’re really delicious!’ So I started giving them away to family and friends.” Soon he was buried in work; on top of the feed store and egg operation, he and Sorrow raise pastured chicken and beef (around 25 cows a year) for a slow-but-steadily-growing customer base. Sowell said he can count on two hands the days he and Sorrow have taken off since they started producing eggs—including time off for funerals and a family wedding. “It’s to the point where farmers’ market days feel like vacation by comparison,” he said.

Sowell also spends a great deal of time explaining the differences between pastured eggs and those raised in enclosed facilities, including the murky nature of the term “free range,” which doesn’t necessarily mean the birds spend time outside. (See more egg terms here.) This type of counter-messaging can seem tedious, but it’s crucial in an industry where greenwashing has become the norm.

“It’s frustrating to see commercial egg companies misleading the public, saying their eggs are ‘farm fresh,’” he says. “Sooner or later that will come to a head. I see the public becoming better and better educated and pasture-raised eggs will be more of the norm than a rarity.”

Below is a chart published by the folks at the Portland Farmers Market a few years back for an article called Cracking the Egg that details the cost to produce pasture-raised eggs. 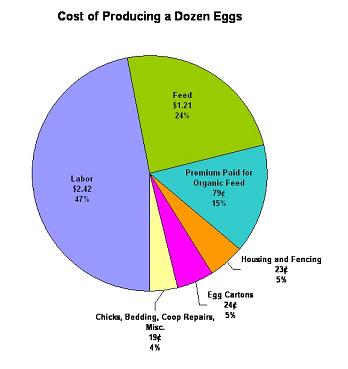