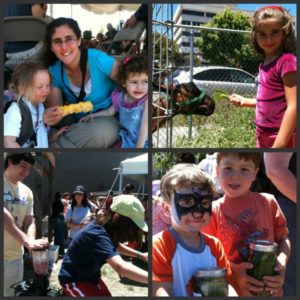 Sunday marked the grand opening of Urban Adamah, the first faith-based, modern urban farm in West Berkeley, at 1050 Parker Street near San Pablo Avenue, opposite Fantasy Studios. The one-acre farm with Jewish roots offers a residential fellowship program for young adults, summer camps for kids and teens, and plans to help feed the needy in the community.

On an uncharacteristically warm June day, several hundred people, including many families with young children, turned out to tour the farm, meet chickens, bake pizzas, pickle cucumbers, make ice cream, and whip up bicycle smoothies—as well as learn a little about the philosophy behind the farm, currently boasting greens, squashes, tomatoes, and other summer crops.

Local urban farming icon Novella Carpenter welcomed the newbies to the neighborhood, along with Assemblymember Nancy Skinner and Councilmember Darryl Moore.  Fellow West Berkeley urban farmer Jim Montgomery, who walked his goats over to say hello, was a big hit with the younger set.

“The more urban farms we have in this area to help fill a gap in accessibility and availability to fresh, healthy produce the better,” said Skinner, who grows her own backyard bounty in walking distance of Urban Adamah. Skinner has done so since the 1970s when she lived in The Integral Urban House, a pioneering collective residing in a converted Victorian home that grew its own food and recycled gray water long before the current batch of urban homesteaders took up city farming.” We need to demonstrate to people that we can grow food anywhere and people need to see where there food comes from.” 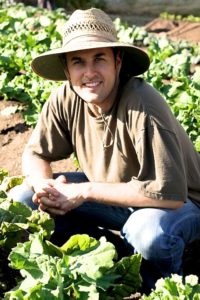 Urban Adamah is the brainchild of UC Berkeley graduate Adam Berman, who explained the name thus: “Adamahmeans earth in Hebrew and also shares the same root word as the word adam which means human. The word connotes the connection between the earth and earthlings. We like that.”

The farm marries Berman’s interest in social justice issues like hunger and food security, with environmental stewardship and spirituality. His own religious practice combines progressive Judaism with Buddhist teachings.

Berman spent seven years as the head of the Isabella Freedman Jewish Retreat Center in Connecticut, where the seeds for the farm’s fellowship program, known as the Jewish Sustainability Corps., were first sewn. But the 40-year-old, who now lives in North Berkeley with his wife, said he always knew he’d bring the idea back to the Bay Area, where the interest in sustainable food and social justice made it the right fit for the pilot project. “Berkeley feels like home for me,” he said.

Currently, a dozen fellows, who represent a range of Jewish beliefs, live in a rented house near the farm. The intensive curriculum, in a kibbutz-like setting, is designed to equip fellows with tools to become agents of positive change in their communities, said Berman. As part of the program each intern volunteers at food security organizations in the area, including The Ecology Center’s Farm Fresh Choice, Cooking Matters (formerly Operation Frontline), City Slicker Farms, and People’s Grocery.

Berman said that the Jewish tradition’s core values of ahava (love), chessed (compassion) and tzedek (justice) inform all the activities on the farm, which, he added, seek to strengthen young people’s bodies, minds, hearts, and souls. Urban Adamah also practices age-old Jewish customs such as Bal Taschit (do not waste), Shmita (letting the land rest), Peah (leaving the corners of the field for the poor), and Tzaar Baalei Chayim (preventing cruelty to animals), all carried out amid the environmental and social realities of a 21st Century urban farm.

Most of the farm’s harvest is intended for local food banks and homeless kitchens; Berman hopes the plots produce about 8,000 pounds of edibles this year. In the near future he plans to approach restaurants in the immediate area for food scraps to feed the farm’s chickens and add to the soil.

The annual budget for the farm is around $360,000. Public programs are slated to bring in about $15,000 a year and fellows pay $1,200 each to attend the leadership training, but Berman still needs to raise significant funds to keep the nonprofit farm afloat. To date, core support has come from The Dorot Foundation, Walter and Elise Haas Fund, Nathan Cummings Foundation, Repair the World, Saal Family Foundation and UpStart Bay Area.

Berman got one lucky break: land owner Wareham Development agreed to host the farm rent-free for two years on the previously vacant lot. Hence the mobile feel to the farm: all crops are grown in above-ground pallet boxes, the chicken coops are on wheels, classes are held in tents and the greenhouses can be moved too, should a relocation prove necessary when the current lease is up.

Despite its transitory nature, Berman sees his program putting down roots. “I hope that Urban Adamah becomes a national model for engaging Jewish young adults in environmental sustainability and urban community renewal,” he said. “The program is highly replicable. There could be an Urban Adamah site in a half dozen cities across the country within the next 10 years.”

Today, Urban Adamah will kick off a series of movie nights with the funny and informative food documentary Food Stamped, shot locally by a couple who attempted to eat healthily on food stamps alone. Read a review on Lettuce Eat Kale. An optional farm tour starts at 6:30 p.m.; the screening begins at 7:00 p.m.