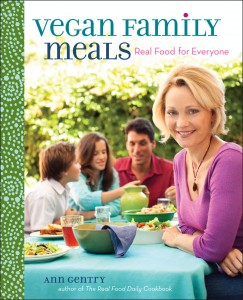 Ann Gentry is the creator and founder of Real Food Daily (RFD), a mecca for organic, vegan cuisine in Los Angeles, where she and her staff serve up delicious, plant-based food to celeb devotees including Alicia Silverstone, Ellen DeGeneres, and Conan O’Brien. The executive chef to Vegetarian Times magazine, and star of her own cooking show, Naturally Delicious, Gentry is also the author of The Real Food Daily Cook Book. Her new cookbook, Vegan Family Meals: Real Food For Everyone, just out this week, offers more than 100 tasty recipes. I recently had the pleasure of speaking with Gentry about cooking for families, raising children vegetarian, and why she believes in feeding people whole, natural food.

What’s a Southern girl like you doing in a vegan joint in Hollywood?

I’m from Tennessee, and like most people, grew up eating the Standard American Diet, only Southern style. People ate a lot of meat, everything was fried, and no one questioned frozen or packaged food. When I moved to New York City in the 1980s to pursue an acting career, I worked in a natural foods restaurant and that experience had a big impact on me. I became interested in the cause and effect relationship between my body and the food I ate. But mostly, I just felt really good eating whole food. When I moved to Los Angeles in the late 1980s, I worked as a personal chef to actor/director Danny DeVito, and later had a home delivery service before I opened the first RFD restaurant in 1993. I base my cooking on macrobiotics (a diet based on whole grains and vegetables), which taught me the connection between diet and health. I’ve been vegetarian and vegan on and off for three decades; these days I eat a small amount of dairy and fish.

What about cooking for families appeals to you?

I thought the RFD cookbook would be my one and only. But, I realized I had another book in me after I had two children (a daughter, Halle, twelve, and a son, Walker, eight) and began feeding my family out of my own home kitchen. I wanted to create a book with very simple and tasty recipes. The central theme of this book is family and who is around your table and it doesn’t have to be kids. Your family is your friends, neighbors, colleagues, and even just yourself. I want people to sit down and eat together in a healthy and delicious way. The focus is on texture, color, cooking methods, simplicity of ingredients, accessibility—you can find most of the ingredients in your own pantry. I grew up sitting down to a meal of protein centered in the plate with several side dishes. People are busy and don’t have time to make all of that food now. In this book, you can learn to make a whole meal out of salad, which is my favorite way to eat, and you can be completely nourished and satisfied.

Your family helped you with this book. What is like raising kids vegetarian and/or vegan?

I’m lucky because my husband is as committed, if not more, than I am to eating well. We keep a vegan household, though sometimes we have goat ice cream or yogurt, and the kids eat what we eat. My daughter breastfed and was vegan for first two years of her life and then she became vegetarian, and now she’s exploring food. She is sort of a radical vegan, who understands what it means to kill an animal. Children do. It will be interesting to see if my kids will rebel against it and if they do, I’m not going to stand in their way. I made a conscious decision that I don’t want to be the mother who follows her kids around with “special” food, though I do appreciate families whose children have allergies. 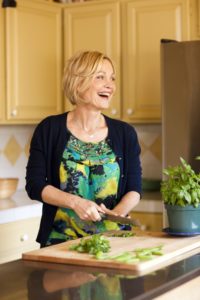 Why is eating less meat important?

I try to never preach and knock people over the head with a vegan message. Veganism is a noble cause, but most people aren’t going to become vegan or vegetarian. That doesn’t mean they don’t seek out and want more grain-based food in their lives. I’m hopeful that the more grains and vegetables people eat, the more they will want to eat this way. And times have changed. People are eating less meat due to the horrible practices involved with industrial animal agriculture and also for their health and the environment. And there are a lot of vegetarians who are living on processed tofu meat-like products. While I do include recipes in the book with tofu, tempeh, and nondairy cheese, I’m not trying to replicate flavors or textures of meat. I’m much more interested in getting people to eat whole, unprocessed food.

You were one of the first restauranteurs to commit to organics. Why is organic important to you?

Choosing fruits and vegetables that are grown organically in pesticide-free soil is the best thing you can do for yourself and your family. My dollars go toward supporting small family farms and keeping chemicals off my plate, out of my body, and out of the environment. Nearly everything we have at RFD is almost 100 percent organic. We bite the bullet and pay the extra cost for organic ingredients because we believe it is better for our customers and the planet. When we first opened, I went to the Santa Monica farmers’ market twice a week, and I have longterm relationships with some incredibly committed organic farmers, including Bill McGrath, Coastal Organics, Burkhart, Maggie’s farm, and Del Cabo—Larry Jacobs is my brother-in-law, and we love using his cherry tomatoes in our guacamole.

What’s your take on MyPlate?

From my perspective, USDA’s MyPlate represents a shift in the right direction from prior recommendations, but that’s not saying much. Let’s face it, the agency has a stated purpose to promote the sale of agribusiness products. Leaving my cynicism behind, I do like that fruits, vegetables, and grains comprise three-fourths of MyPlate. But why did they stop at half? Mostly likely because the cereal manufactures won the day at that negotiation. Madison Avenue has convinced America that whole grains come from a cereal box. The inclusion of “protein” as a “food group” is an obvious win for the meat industry’s lobbyists.   These guys have spent big bucks for generations convincing Americans that protein is the flesh of a dead animal. For the most part, they have succeeded. So now we have  “official” guidelines with their “code word” taking up one-fourth of the plate.  On the positive side, beans, peas, nuts and seeds make the list of “protein foods.” The fact is, all plants contain plenty of protein for a healthy diet and American’s over consume protein, which many experts say contributes to depletion of calcium.  Eating more calcium will never overcome the problem of bone loss and I’d like to see that cup of dairy on the side of MyPlate fed back to the calves as the mama cow had intended. Obviously, the dairy industry’s lobbyists earned their pay here.

One of Gentry’s favorite recipes from her new book follows. On Tuesday, June 21, she will be cooking up some vegan fare and discussing her new book at 18 Reasons in San Francisco. 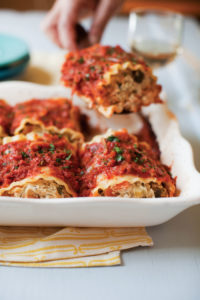 This is a fun way to serve lasagna: Instead of the traditional layering, you top the individual noodles with a vegan ricotta cheese and vegetable mixture and roll it up. My tofu ricotta cheese is a blend of tofu, miso, and tahini, which creates a creamy consistency that easily spreads. The tomato sauce takes no more than 10 minutes to make; if there is any left over, use it the next day over rice or noodles. Serves 6 (makes 12 rolls)

Preheat the oven to 350°F. Heat 1 tablespoon of the oil in a large, heavy frying pan over medium-high heat. Add the onions, garlic, basil, salt, and pepper. Sauté until the onions are tender, about 10 minutes. Add the carrots, zucchini, and broccoli and sauté until the carrots are crisp-tender, about 12 minutes. Let cool completely. Mix the vegetable mixture into the tofu ricotta cheese.

Cook the noodles in a large pot of boiling salted water, stirring often, until tender, about 10 minutes. Drain and rinse the noodles, then toss them with 1 tablespoon of the remaining oil to prevent the noodles from sticking together.

Coat a 13 by 9 by 2-inch baking dish with the remaining 1½ teaspoons oil. Spread 1 cup of the tomato sauce on the bottom of the dish. Using a spatula, spread about ½ cup of the vegetable mixture over each lasagna sheet, leaving about ½ inch of each end uncovered. Roll up each sheet tightly and place it seam-side-down in the baking dish. Pour the remaining 2 cups tomato sauce over the lasagna rolls.

Cover the dish with aluminum foil. Bake until the sauce bubbles, about 55 minutes. Remove the foil and continue baking for 15 minutes.

When blended, the tofu gives this vegan cheese a creamy consistency that resembles ricotta. This recipe is borrowed from my first book, The Real Food Daily Cookbook—when you have a good recipe, why change it?  Makes about 3 cups

Blend all the ingredients in a food processor until smooth. The cheese will keep for 2 days, covered and refrigerated.

This is a perfect, simple tomato sauce. The key is to use canned crushed tomatoes, easily found in a grocery or natural foods store. Eden and Glen Muir are my favorite brands because they are organic.
Makes about 4 cups

Heat the olive oil in a heavy saucepan over medium-high heat. Add the shallots, garlic, and salt and sauté until fragrant, about 20 seconds. Stir in the tomatoes and the 1 cup water. Bring to a gentle simmer, then decrease the heat to low and simmer gently, stirring occasionally, for 20 minutes, to allow the flavors to blend. Stir in the basil and oregano. Remove from the heat.