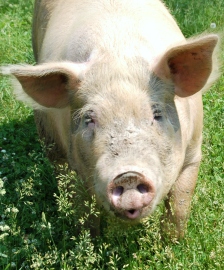 One thesis in my new book, The Bond: Our Kinship with Animals, Our Call to Defend Them is that so much animal mistreatment happens because so many of us in society have become disconnected from animals. In other words, they are far removed from our daily experiences, especially those animals used in institutional settings for a wide variety of purposes.

We are disconnected from the fur trade or the skin trade—we can select these products from the rack or even from a mail order catalog, and they later show up on a doorstep or at the apartment. We are greatly distant from the animal testing that goes on in the run-up to marketing of household products and cosmetics, which are nicely lined up and available to us at department stores bearing no evidence of any pain, suffering, or struggle on the part of an animal. We are certainly very removed from our meat, which comes neatly wrapped and packaged in its proper section at the supermarket, well-prepared at a restaurant, or barely recognizable at a fast food joint.

Facebook founder Mark Zuckerberg faced up to this reality in announcing recently that he’d no longer eat meat unless he’d killed the animals himself. This of course means, according to him, that he’s reduced his meat consumption substantially. He then proceeded to slaughter some animals with a knife held in his own two hands. He’s presumably eaten these animals.

Many Americans expressed shock at the act and sympathized with the animals he killed. Some condemned Zuckerberg, accusing him of being cruel.
While I understand those natural reactions to the killing of these creatures, I think we owe Zuckerberg some plaudits, not only for reminding people that eating meat involves the killing of animals, but also for recognizing that it’s morally dubious to simply pass the “dirty work” off to an anonymous slaughter plant worker. Indeed, we should ask ourselves if there’s really much of an ethical difference between killing an animal (what Zuckerberg is doing) and paying others to kill animals for us (what most of us do).

Too many of us avert our eyes and prefer not to think much about how food gets to our table. It can make it easier for us to rationalize the mistreatment of animals in factory farms and slaughter plants if we believe ourselves far removed from the process—without feeling any connection or sense of obligation to the animals, or even seeing them at all.

Yet if every American were to adopt Zuckerberg’s approach—or even just witness, if not participate in, what happens to farm animals—you can bet there’d be many fewer animals suffering on factory farms.

Zuckerberg’s act, in its own way, was an act of conscience for him.  It was also a public provocation. Eating is a moral act, and it’s time we all face up to it, wherever we may ultimately land on this important question.