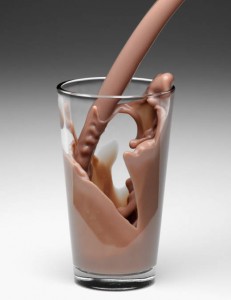 Flavored milk has come under scrutiny as more people, including school food activist and chef Jamie Oliver and his Food Revolution, have implicated it in the childhood obesity debate. (UPDATE: In fact, thanks to Oliver’s work, flavored milk is no longer a choice as of July 1 in LA schools.) Yet many in the mainstream health and nutrition media maintain that it is a weight loss and muscle building “super food.”

Take for example, this article by Men’s Health editor-in-chief titled, “The Chocolate Milk Diet,” which recently made the rounds on my Facebook feed. He writes, “If your teacher gave you chocolate milk as a lunchtime treat, she was (unknowingly) giving you one of the most powerful weight-loss tools in the nutritional universe.”

While foods that offer a combination of fiber, fat, and protein can help satiate with fewer calories, no food inherently produces weight loss. And yet despite the dairy industry’s fervent claim that three servings of dairy a day can aid in weight loss, the scientific evidence is scarce at best [PDF], as evidenced by this meta-analysis published in Nutrition Reviews in 2008.

Most perplexing however, is how a beverage made with added sugar (which are empty calories, providing absolutely no nutrition) can somehow be touted as a powerful weight-loss tool. Three eight-ounce servings of chocolate milk–an amount that meets the suggested amount of daily dairy servings–contribute 36 grams of added sugar. That’s four grams shy of a 12-ounce can of Coca-Cola,and as much added sugar as 12 Dunkin’ Donuts cinnamon cake Munchkins (donut holes). Plain and simple, you’re looking at 144 empty calories.  The fact that schools serve non-fat chocolate milk is irrelevant; we are increasingly seeing a higher amount of scientific research linking high added sugar intake with increased heart disease risk.

It isn’t simply pop-health magazines promoting chocolate milk, many accredited health professionals have gone on record declaring their love for it as well.  In an article titled “Nutrition Experts Applaud Chocolate Milk As A Good-For-You Treat,” Registered Dietitian Liz Weiss describes chocolate milk as “a nutrient-packed form of chocolate that always seems to satisfy. Plus, chocolate milk is such a better alternative than sugar-filled sodas and fruit drinks that contain little or no nutrients.”

The cocoa used in commercial chocolate milk is alkalized, meaning that the high amounts of the healthful antioxidants and polyphenols naturally found in cocoa are stripped away. In order to reap the many health benefits of chocolate, it must be consumed in a minimally processed form.  As if that wasn’t bad enough, a tablespoon of sugar then goes into each eight-ounce serving of chocolate milk.  The now-familiar argument that chocolate milk is a better alternative to sugar-filled sodas is quite weak, considering that sugar-filled sodas are nutritionally void.  You’d be hard-pressed to find a beverage that is a worse alternative to soda.

Weiss goes on to say, “Flavored milks provide the same nine essential nutrients and benefits as unflavored milks; the main difference is the added sugar, but the amount is significantly less than what you’d find in soft drinks–and if it helps kids get their milk, that’s a good thing.”
The nine essential nutrients she refers to are: Calcium, vitamin D, protein, potassium, vitamin A, vitamin B-12, riboflavin, niacin and phosphorus.  All of these nutrients are found in other foods, yet, much of the fervent chocolate milk propaganda makes it seem as if chocolate milk is the only way children can incorporate them into their diet.

Dairy enthusiasts, including [PDF] the United States Department of Agriculture often make the claim that dairy foods offer the most reliably absorbable calcium.  Alas, that mantra is absolutely false. A 1990 study from the American Journal of Clinical Nutrition shows that the calcium in kale is more absorbable than from milk. And, this 1994 study also published in the American Journal of Clinical Nutrition shows that broccoli, brussels sprouts, and mustard greens offer a higher percentage of absorbable calcium than milk. Besides, the focus on calcium is myopic, as there are many other nutrients–many of which are not found in milk–that are crucial for bone health and development.

The best thing chocolate milk has going for it is a multi-million dollar marketing campaign and relentless lobbying power. The Milk Processors Education Board–behind the 18-year-old “Got Milk?” advertisements as well as “Body By Milk” and “Refuel with Chocolate Milk”–has spent roughly $70 million each year just for advertisements.

Nutritionally misleading and inaccurate statements aside (“without milk in your diet, it’s difficult to get the recommended amounts of nutrients you need”), all the campaigns hinge on body image, with mentions of “looking your best” and “maintaining a healthy weight” peddled by airbrushed celebrities who often times display taut arms and chiseled abs. These advertisements–and hyped-up journalism like the one mentioned at the beginning of this article–simply propagate the longstanding “milk is nature’s perfect beverage” myth, which has a lot more to do with sleek public relations and very little to do with nutrition science.

Often times, these debates turn into a “vegan” vs. “omnivore” battle, which distracts from the core issue.  This goes beyond the question of whether it is ethically “right” or “wrong” to drink a beverage that is an animal byproduct.  Rather, it has to do with the fact that misleading and incorrect nutritional information is presented as objective fact.  As a soon-to-be Registered Dietitian, I am fed up with self-proclaimed experts who ultimately confuse the general public with erroneous nutrition claims that read like industry propaganda. Perhaps even more troubling, I am flabbergasted at the many individuals with the “right credentials” who continue to parrot the Dairy Council’s so-called facts, despite the scientific evidence that disproves them.

While dairy milk is not an essential beverage, it can have a place in a healthy diet.  That said, flavored milk is–as school lunch activist Ann Cooper puts it–”soda in drag” and should not be served daily to children at school or touted as a superfood to everyone else.