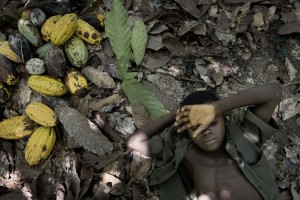 As a father, there is perhaps nothing more profound than being mindful, present, and open-minded enough to life’s lessons that my young child incessantly and brusquely thrusts in my face. As a winemaker, little has motivated or reminded me more about our natural propensity to be captivated by our sense of smell and taste, as much as watching my toddler instantly become enraptured with chocolate. In chocolate, at three-years old no less, he likely had already discovered one of the few things that will remain among his favorite pleasures for many decades to come. A remarkable lifetime relationship that will bring virtually uninterrupted pleasure. Anyone think they can compete with that?  Sweet dreams.

But just recently, when he turned four, I thought he was compassionate enough and could emotionally handle the “dark side” of chocolate. By forcibly inserting his brain into his heretofore frivolous relationship with chocolate, beyond just tickling its pleasure receptors, I was hoping to elevate his enjoyment of chocolate beyond mere taste. Now, when he comes to understand the implications of his chocolate consumption decisions, it will not only taste great, but also feel great.

It is achingly beautiful to witness the instinctive, boundless love, and yes, even empathy, in a young child’s heart. At four, my son does not yet know that the world is supremely unjust and that children are not born equal. He does not yet know a single reason why anyone, no matter the circumstance, deserves anything less than true happiness, fulfilled. There is a glorious magic, wisdom, and starkness to the simplicity with which he approaches logic, reason, and justice.

He doesn’t yet know the horrific nature and history (past and present) of slavery. But he doesn’t need to. To my four-year old boy, it is so incredibly simple. What isn’t so simple is how somewhere along the road to adulthood, youth lose empathy. They lose the energy they once had to fight for something better for themselves and especially others. And their idealistic instincts drift away with each puff on a long forgotten dandelion.

From Gnats to Farmers 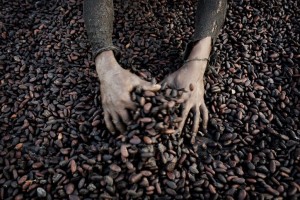 People have seemingly always been obsessed with chocolate. Ancient civilizations such as the Olmecs, Aztecs and Mayans had long ago used cacao as currency, ceremonial offerings, and as food reserved for the elite. The botanical name for the plant, Theobroma cacao, means “food of the Gods.” It is a curious plant: While fermented and processed cacao beans (i.e., chocolate) is recognized as one of the most aromatic and intoxicating substances known, the cacao flower itself has neither fragrance, nor nectar. As such, it is pollinated by chance and not by bees, but by the lowly gnat.

Cacao is grown in a narrow belt around the equator in some of the world’s poorest nations, with West Africa (Ivory Coast, Ghana) responsible for around 70 percent of the world’s supply. Farming cacao is not where the money is: It is estimated that approximately 90 percent of the world’s cocoa is grown on small family farms of less than 12 acres. As such, the World Cocoa Foundation estimates that 40-50 million people worldwide are dependent on cocoa as their main source of income. Widespread reports persist of large scale poverty, farmers cheated myriad ways, and systematic and pernicious exploitation despite hardscrabble toil and enormous profits and pleasure derived from their labor.

While executives and their boards of directors have sought profit from the exploitation of human beings within their corporate family, the earth fares no better. Poor soil fertility, increased pest pressure, declining yields, and other immediate economic factors have led to widespread disfigurement of diverse cacao habitats and deforestation, which leads to an endless cycle of ecological destruction.  In its 2004 report, “Commodities and Conservation: the Need for Greater Habitat Protection in the Tropics,” the Center for Applied Biodiversity Science estimated that cacao production has been responsible for the loss of 80 percent of the forest habitat in West Africa over the past several decades.

Most abhorrent of all, despair and hopelessness plaguing the nations bordering cacao exporting countries (Mali, Burkina Faso) has led to conditions conducive to child slavery. UNICEF, the U.S. State Department, and many others have reported [PDF] the use of child slaves in cocoa production for more than 10 years, particularly by the world’s largest exporter of cacao, the Ivory Coast.  According to the International Labor Rights Forum, the State Department estimates that more than 109,000 children in the Ivory Coast work under “the worst forms of child labor” and that an estimated 10,000 are unquestionably slaves.

Tcho chocolate, an innovative chocolate maker based in San Francisco, is frank when they write on their Web site, of the Ivory Coast, “Children are stolen from their homes…and sold to Ivory Coast growers, where they are shackled, threatened, beaten, and, all too often, killed.” 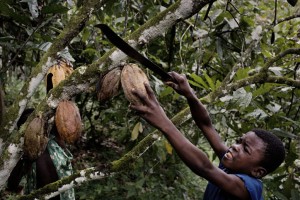 Once the condoned use of child slaves by today’s multinational chocolate barons was unwrapped in these reports, the industry attempted to deflect scrutiny and meaningful regulations and committed to address the (ready for this non-sequitur?) “worst forms of child slavery” by 2005.  Working with Senator Tom Harkin and Representative Eliot Engel, the industry formally outlined steps they would take to meaningfully reduce this practice when they signed the “Harkin-Engel Protocol” in 2001.  Having failed to reach their modest targets in 2005, the industry defensively re-affirmed their “commitments” and extended the protocol in 2008 and again in 2010.

How determined is the chocolate industry to ending child slavery in their immediate corporate families? In his May 2008 testimony during a public hearing on child labor and human trafficking conducted by the Bureau of International Labor Affairs (ILAB), Larry Graham, president of the National Confectioners Association of the U.S. (a signatory to the Harkin-Engel protocol), concluded, “Cocoa should not be on ILAB’s list. If placed on the list it would serve as a discouragement… It would send the wrong message to industries and others… Indeed, it would lead to the logical question, ‘if cocoa is on the list despite the enormous resources devoted by the industry, governments and NGO partners, why mount such an effort?’”

In September 2010, Tulane University, working with the U.S. Department of Labor (USDOL), released its oversight report for Congress on progress with the Harkin-Engel protocol over nearly a decade. In it, they reveal that the “majority of children exposed to the Worst Forms of Child Labor remain unreached by the remediation activities currently in place.” Tellingly, they also reveal that the USDOL had committed $10 million in taxpayer dollars in 2010 towards implementing the steps outlined in the protocol. At the same time, the industry itself, with billions of dollars in cash at their disposal, had committed $7 million in “new” funding—over the next five years.

During his October 2010 presentation at the World Cocoa Foundation partnership meeting, Allesandro Cagli from Ferrero, reassuringly presented a slide which read, “Several surveys have shown that while consumers in the EU and US may pay lip-service to sustainability issues, many do not put it into practice when shopping.”

In the chocolate industry, the companies, executives, and their boards who have pocketed billions of dollars in cash from the exploitation of millions of people and the Earth: Hershey’s, M&M Mars, Nestlé, Kraft, Cargill, Archers Daniels Midland (ADM), know that you know. In fact, they snicker at the fact that you just don’t care enough to do anything about it. Throughout the world, executives of these global corporations (and their top subordinates) with billions of cash sitting in their bank accounts, meekly cast the complexity of supply chains as the indecipherable code blocking greater transparency, information, control and progress towards ending slavery under their nose.

It is said with a hint of exasperation (and surely a wink) in this whopper of a tale, that millions of small farmers harvest their crops in remote lands, then travel over rugged dirt roads to markets, co-ops, or weigh stations.  There, freshly harvested and highly perishable cacao is bought or sold, aggregated and exchanged, or immediately and coldly rejected outright. As countless village markets are aggregated and sold to larger constituents, volumes amenable to global trade slowly begin to take shape.  The result, they meekly suggest, is impenetrable obfuscation.

Yet, if I were to look for a simple, fairly tasteless chocolate bar to satiate a sugar craving, I don’t have to spend very much money, or expend much energy, looking for one. While in sourcing cacao their global supply chain leaves these highly compensated executives be-twixed, the aforementioned companies have miraculously found a way to get their supply of chocolate into every retail store, shack, hut, newsstand, school or ferry on the planet and all happily accounted for in the profit statements which “inform” their bonuses.

Tomorrow: Part II of this article, A Better Way: Chocolate with Dignity