Food Forward: A Sustainable TV Show for All Americans (VIDEO) 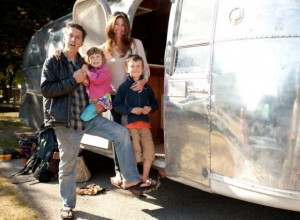 Filmmaker Stett Holbrook will be happy if food reform advocates (like Civil Eats readers) respond favorably to “Food Forward,” a television series he cooked up with old college pal Greg Roden. But he’s really trying to reach an audience who hasn’t heard of Ann Cooper or Will Allen—let alone the rest of the cast of characters the pair have filmed in their travels around the country documenting food renegades changing the way people eat in America.

Holbrook wants his pilot on urban agriculture to appeal to people beyond Berkeley and Brooklyn. “To grow this movement I’m interested in reaching people who eat, say, McDonald’s to help them realize that fast food is lame,” he says. “I want them to see the show and think it’s cool to know where your food comes from, it’s cool to eat sustainable food, and there are lots of cool solutions out there.”

And he’s putting his money where his mouth is. This summer he’s sub-leased his home, taken a sabbatical from his job as food editor at Metro, a Silicon Valley alternative weekly, and he and his young family have hit the road to spread the word about the pilot (and hustle up some significant funding, he hopes, for a 13- part series.)

Holbrook is towing a vintage 1965 Airstream trailer, no less, and people can follow his edible adventures and learn more about the farming folk he meets on the “Food Forward” blog.

“Food Forward” profiles people across the country making a difference in communities where good food is hard to come by, through their work in small-scale sustainable food production. The pilot, acquired by local PBS affiliate KQED, is expected to air nationally this fall. There’s not a celebrity chef or a cooking demo in sight. Instead, it picks up where Food, Inc. left off and makes a compelling showcase for the positive developments on the food and farming front across the U.S. And while Brooklyn and the Bay Area get screen time, there’s footage from less-well covered territory, too, such as Detroit, Milwaukee, and Cleveland.

The “Food Forward” crew sought out individuals they consider food rebels, meaning someone who is going beyond sustainable, local, and organic food production or distribution. We see farmers using hydroponic and aquaponic techniques, and people planting seeds in urban rooftop gardens, abandoned neighborhoods, even suburban malls. None of them are waiting for foundation grants or government assistance, they’re part of a new generation of D.I.Y. farmers, who just, well, do it themselves. 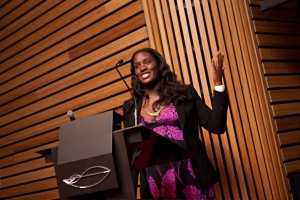 We meet Abeni Ramsey, who, as a young single mom, began growing her own food in West Oakland out of economic need. Ramsey, a beneficiary of the City Slicker Farms backyard garden building program, now provides produce to community CSAs and local restaurants like Flora via Dig Deep Farms, and City Girl Farms).

“In the pilot I was particularly inspired by the images from Detroit, like that young man who raises chickens for a living in his community,” says Ramsey, who describes herself as a delicious nugget who took a while to grow up. “This food movement is happening in an organic way all across the country but it’s not about politics or activism,” adds Ramsey, who spoke after a screening of the pilot in Berkeley last Thursday night.  “It’s about people in communities doing for themselves.”

Lisa Landi, project supervisor at KQED Presents, which picked up the pilot, couldn’t agree more. “This isn’t another anti-industry documentary filled with doom, gloom, and guilt,” says Landi, who also spoke at the screening. “These are well-told, beautifully-shot stories of people who are making a difference to the food and farming problems in this country.” 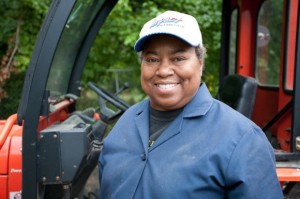 Case in point: Edith Floyd, a soft-spoken, middle-aged African American woman on a tractor plowing vacant lots in Detroit and replacing them with gardens full of greens, corn, okra, melons, and other produce as part of her Growing Joy Garden. Why not, she seems to say to the camera. Her quiet, can-do spirit permeates every frame she’s in.

Funding for the 13-part series is anything but secure. That’s where the road trip comes in. The “Food Forward” creators need a major donor (or two or three) to step up and underwrite the series, budgeted at around $1.5-$2 million. Holbrook hopes to meet folks with deep pockets during his four month edible adventure—he says he’s even willing to hit up Walmart for the money—if that’s what it takes to get the series funded.

Like all documentary filmmakers, Holbrook wants to educate, entertain, and inspire. He also wants to motivate people to take action on issues such as the Farm Bill, school lunch, and GMO-foods. “As a restaurant critic, I was often writing about food I didn’t really want to eat,” he explains. “I wanted to talk about antibiotics in food, soil problems, and industrial agriculture. That’s hard to do in restaurant reviews. That’s why I’m excited about what we’re doing with this series.”

Watch the trailer for the series here: