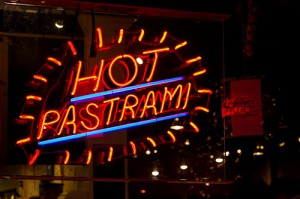 Is the Jewish deli in decline or the midst of a revival?

It depends on where you’re sitting. Recently I found myself sitting in front of a panel of deli owners who had gathered in Berkeley, California to talk about their efforts to redefine and save the beloved institution of the Jewish deli.

Last year I’d sat in the same place listening to a somewhat different group of people—also called together by Levitt and his partner Karen Adelman—hold a referendum on the deli. That panel’s purpose was for Levitt and Adelman to ask their customers’ permission to serve more seasonal, sustainable food, offer a smaller menu, and bring in Jewish food traditions other than Ashkenazi. The rub? The deli was endangered (evidenced by the fact that there were once 1,550 Jewish delis in New York City and today only a couple of dozen remain). Their take was that the deli was no longer sustainable in either a business or an environmental sense, and its survival depended on customers adjusting their expectations of what deli is.

One year later, a lot has changed. The trail blazed by Levitt and Adelman is being trod by a new group of operators who are collectively pushing the boundaries of what deli is today. Breakfast sandwiches with bacon; homemade celery soda; hummus, harissa, and hamentashen all co-exist on today’s inventive menus.

These menus, though they may raise the ire of traditionalists, are keeping customers coming back and bringing new ones into the deli fold. They’re also proving that deli is what you make it. They’re innovating, redefining, and opening up the concept of deli to include new traditions, creative preparations, seasonality, and yes, even sometimes bacon.

As Joan Nathan pointed out, the “deli is an American invention and its always changed. It’s not even Jewish. It was started by German immigrants who opened on Sundays. Over time, Jews from Alsace Lorraine took over and then kosher delis came along.”

After World War II homemade sausages and hand-cured meats gave way to mass-produced factory meats. Now the deli is coming full circle and these new operators are making their own pastrami–an endeavor that comes with its own set of problems, namely consistency in production and lack of a dependable supply of quality meats. All of these pioneers are trying to source pasture based, humanely raised brisket for their pastrami, but are finding that 100 percent grass-fed beef doesn’t produce the product consumers expect, and also sometimes angering customers who are attached to kosher certifications.

But kosher slaughterhouses have their own problems. Noah Bernanmoff was blunt on the subject of kosher certifications: “Kosher food is laughable,” he said. “Especially meat. Kosher meat is a kind of scam. As a Jew I ascribe to tikkun olam, or taking care of one’s world. This means buying meat from places that take care of workers and slaughter humanely.”

It’s not just the kosher question. All the deli owners on the panel admitted to struggling with consumer expectations about what certain iconic dishes are. Take kugel, for example. To some diners kugel is a sweet noodle based dish with fruit. Others expect a savory potato-based dish. And then there are the non-Jewish customers being brought into the deli fold who wouldn’t know kugel from cacciatore.

Though most of these new deli operators try to accommodate the traditional tastes of older customers, they are anxious to forge ahead with their idea of what a deli is. According to Bernanmoff, “There is no tool to fight nostalgia. If you take the backlash personally, you forget the mission you’re on.”

Nostalgia for deli isn’t always about the food; sometimes it’s about the deli as a space. That includes the people who populate it, the hum of conversation, the feeling. Evan Bloom and his partner Leo Beckerman of Wise Sons Pop-up Deli in San Francisco have learned how to make a space for deli from scratch every Saturday in a Mission District coffee house, proving that deli is what you make it. “Every Saturday we create it,” he said. “That first Saturday, my partner Leo looked around and said, ‘it smells like a deli, it looks like a deli,’” adding, “We like to watch the tables change position throughout the day as people come in. They push them together, they pull them apart, and it’s a deli.”

I left the evening feeling hopeful about the future of the deli and excited by the passion of these new operators. It wasn’t until later that it struck me that the deli renaissance might be part of a cycle of death and rebirth in the food movement. It seems that just as we’re on the brink of losing something precious, forward thinking people start to work to save it. Think about the resurgence in gardening, canning, small-scale agriculture, locally raised meat, the Slow Food Ark of Taste, and the many new cheese artisans that have started up in recent years.

Indeed, after a period of decline, it looks to me like deli really is in a period of revival. Long live pastrami!