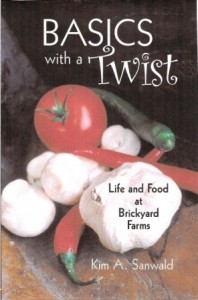 I buy local and organic food as much as possible, but find that not only do I have to force myself to eat vegetables, but I lack enough ways to cook them besides the handy but boring steaming and stir frying. Many farmers’ market patrons and Community Supported Agriculture (CSA) members have a similar problem. However, Basics with a Twist (available here), by Kim Sanwald, has truly inspired me to transform my own cooking with the same zeal and enthusiasm as blogger and author Julie Powell had when she cooked her way through Julia Child’s classic, Mastering the Art of French Cooking.

The five-and-a-half acre farm’s success is attributable to the production of fresh, flavorful vegetables grown in good clay soil that has “some amazing minerals” to enhance their “shocking taste.”  This is all done without chemicals or sprays, although the farm is not certified organic.

Last year Sanwald and Lane grew 4,800 tomatoes from 1,500 plants and from 650 seed potatoes, they harvested 7,000 pounds.  Their market customers couldn’t get enough! 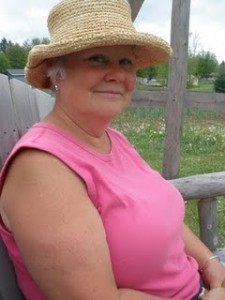 In the book, Sanwald takes readers through the growing season by focusing on the farm’s most popular vegetables: Garlic, tomatoes, potatoes, carrots, and beets. She provides tried and true recipes for salads, soups, stews, sauces, dressings, casseroles, and side dishes that go well with various meats. They make your mouth water just reading them.

But the book is more than a cookbook. It is also a memoir of Sanwald’s complete change of life after 36 years as a manager of a dental office in the city to become a truck farmer–a farmer growing a diverse range of vegetables on a small scale, often sold from truck to consumers or to restaurants–in rural Cloverdale.

Sanwald first started working on the farm in 2007 when she and a group of friends came to Lane’s aid after her partner, Cate Burke, had died unexpectedly from a blood clot at age 46.  Lane had purchased the farm in 2001 after leaving a career as a building and remodeling contractor.

Being close to the land and close to her source of food awakened something in Sanwald despite the fact that the work is hard and dirty and the days are long.

One day as she was harvesting kale she suddenly broke down in tears realizing that she was connecting to the earth in a deeply spiritual way.

Doing what others encouraged or expected her to do had made her unhappy and depressed through most of her life. She found happiness, however, by growing food. Today, she said she rejects hair coloring, make-up and stylish clothes, things that once held great importance for her.  She has also reduced her weight by 30 pounds and two dress sizes.

“I feel better,” she said, “And the better I feel, the more I want to do this work.”

Basics with a Twist shows readers what can happen to a person through greater attention to food.  Ever the cook, Sanwald expresses her appreciation for the aesthetic pleasures of food that is flavorful, healthy, homegrown, home-cooked—and shared with others around a table.

The whole project came about because Sanwald found herself giving out hundreds of recipes to customers at the Fulton Street Farmers’ Market in Grand Rapids, where Brickyard Farms is a vendor. Lane suggested she put the recipes together in a book, however, Sanwald was anxious to write about what her new life as a truck farmer meant to her.

“The book is a validation of who we are and who I am,” she said. “I love to write and cook. It’s my creative outlet and this book stretched me and my learning process. By combining both of these things, I am able to help others as well.”

She has plans to write a second book that encourages people to grow their own gardens.

The book also includes a resource list for people looking for information about self-sustaining and organic methods of farming and gardening as well as commentaries on the local food movement and environmental issues.

A version of this piece was originally published on olgabonfiglio.blogspot.com