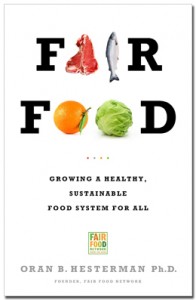 Unless you travel in food policy or agronomy circles, you probably haven’t heard of Oran Hesterman. It’s time you had.

Hesterman, who runs the Ann Arbor, Michigan-based nonprofit  Fair Food Network, has written a book that just might wake you up and get you to care about what’s going on with the food you eat and how it gets to your table.

Fair Food: Growing a Healthy, Sustainable Food System for All is what Hesterman is talking about, and I’ve got to admit, this reporter covering food news cracked open his book (which landed in bookstores yesterday) a tad wary.

Would this highly educated and well-meaning agronomist-activist guy really offer anything new to the sustainable food conversation, I wondered, and more importantly, would he speak to regular people trying to feed their families in a tough economy and who might not understand the difference between grass and grain-fed (or why it matters)?

Boy was I wrong and thrilled to stand corrected. Hesterman breaks free from a tradition of densely written, muddled prose intended for inside baseball players and instead speaks to us all, loud and clear.  On the opening page of the book, he starts from a familiar point of reference–that our education, health care, financial and energy systems are all deeply troubled and in need of dramatic reform.  (No matter which side of the political fence one sits, no one would dispute that America is hobbling on these four fronts, all of which make daily headlines.) He is clever to point out that as we focus our attention on the ongoing debates over health care or financial reform, “there is another system that gets much less attention than it deserves, even though we all rely on it to keep us alive–if we are lucky, three times a day: our food system.”

And then he takes us straight to Detroit, America’s eleventh largest city and erstwhile mecca of the automotive and music industries, which has been without a supermarket since 2007.  (Take a moment to absorb that stunning tidbit.)  If you’ve been scratching your head over what a “food desert” means, here you go.

And if you’re wondering why you should care, a la “not in my backyard,” Hesterman’s got that covered, too. “Even those of us who live in ‘food oases’ and have enough money to buy virtually any food product from any place in the world are living with the fallout of a broken system,” he writes.

It’s a bleak picture alright and arguably depressing. But, I applaud Hesterman for keeping it real and shouting from the rooftops that yes indeed our food system is broken. If you read just the first 50 pages of the book, you will get your money’s worth because it succeeds (where so few others do) in explaining what in the hell is going on every time we chew and how we are all affected, regardless of our wallet size, politics and geography.

Lest you think the book is one big downer, Hesterman quickly shifts gears and proposes solutions for a redesigned (yep you got it) “Fair Food” system that operates on a guiding principle of equal access to healthy food. “In truth,” Hesterman writes in chapter three, “Equal access to healthy food will do more to level the playing field than anything we might change in our health care system.”

And this may be where some of us, new to the conversation, may wander to the list of resources (which is thorough and vast) or skip to the how-to “From Conscious Consumer to Engaged Citizen” chapters.  For the more fluent and well versed, there’s a chapter on public policy and another on the power and influence of big business and its role in the food system, broken or otherwise.

In short, Fair Food is like a good salad bar: You can fill your plate, or have a light snack, but whatever you decide to bite off and chew, you’ll digest every morsel.  Fair food for thought indeed.