Men in the Kitchen: Review of Man with a Pan | Civil Eats

Men in the Kitchen: Review of Man with a Pan 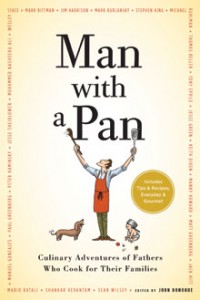 One of the how-did-we-get-here narratives of food goes something like this: Starting in the late 1960s, the women’s movement called upon educated women to forge a new path into professional life while an increasingly convenience-driven industrial food complex conspired with demanding weekday schedules to culminate in empty kitchens and the near extinction of home cooking. It’s a tale that oversimplifies the reality. But when Michael Pollan, in his 2009 New York Times essay “Out of the Kitchen Onto the Couch,”  singled out Betty Friedan’s The Feminine Mystique as the tome that convinced women that cooking is drudgery, he set off a feminist firestorm. Several angry blog posts and counter-defenses later one thing is clear: If more home cooking is essential to changing the food system, men had better get into the kitchen as well.

It’s happening. In 1965, fathers accounted for only five percent of the time spent cooking for the family; now they’re in the kitchen nearly one-third of the time. John Donohue’s new book Man with a Pan, a collection of essays by fathers about cooking for their families, celebrates this change. Donohue, a New Yorker cartoonist and editor, pulled together thoughts by food writers and culinary professionals like Mario Batali, Michael Ruhlman, and Mark Bittman. But one of my favorite things about the book is the inclusion of the voices of “ordinary” dads who have come to cooking simply because it’s work–pleasurable, of course–that needs to be done for their families every day.

“It was very important for me to include a broad cross section of men who cook for their families in the book,” Donohue says. “I wanted the well crafted essays by professional writers, but I also wanted to hear from other working fathers, ones who might have more demanding jobs than being a successful writer. It’s one thing to make your own hours, it’s another to have to be on the job as a fireman, a bond trader, a carpenter, an economist, and still get food on the table. I wanted the book to be an inspiration to men of all professional stripes.”

Inspiration comes from surprising places, like from horror novelist Stephen King, who urges readers to lower the heat and take a “gentle” approach to cooking. Screenwriter Matt Greenberg contributes an homage to King in the form of a screenplay about a man who becomes fatally obsessed with a barbecue grill while caring for an empty, isolated hotel in the off season. There is the classic “overreacher,” Manny Howard, who writes about how his “stunt foodways” (like roasting a whole pig on the beach) are incompatible with feeding a family.

The more practical firefighter Josh Lomask says cooking is like building a house. “It’s a manual process. But unlike a house, which might take months to build, cooking takes one night, and that gives me a great sense of satisfaction.” He says what Pollan was trying to say in “Out of the Kitchen,” but somehow the sentiment is less incendiary coming out of a firefighter’s mouth. “With both parents working, there’s been a whole generation of neglect in the kitchen. Guys are going to have to learn what fifties housewives must have all known–how to plan a menu and feed a family week by week.”

Shankar Vedantam, a reporter for the Washington Post and author of The Hidden Brain digs most deeply into the topic of gender roles. Through a short exercise he illustrates the subliminal biases that cause many of us to think of professional cooks as male and home cooks as female. For Vedantam, when Dad walks into the kitchen to cook for his family he becomes an activist, “actually engaging in political activity that is every bit as serious as that of the suffragettes who marched to win women the right to vote, or the civil rights protesters who marched to win equal rights for racial minorities. If you’re a man who abhors sexism, take up the spatula.” (Somewhere a adjunct professor is photocopying this chapter long with Gabrielle Hamilton’s chapter on “where are the women chefs” from Blood, Bones and Butter for her food studies course.) If that’s not convincing enough for you, there is also the opening quote by 18th-century gastronome Brillat-Savarin: “What woman wants, God wants.”

Donohue is hoping the diverse voices in Man with a Pan will inspire readers of both genders to cook more–and he’s not leaving those readers empty-handed. Every contributor also lists a couple of his favorite, time-tested recipes along with a list of his favorite cook books. There are several recipes for “The Best!” roast chicken, along with Tofu Bolognese, Ceviche, Chocolate Mousse, Ghanian Peanut Butter Soup, pickles, Pan-National Everything-but-the-Kitchen-Sink Fish Cakes, and Whole Roast Cow. Okay, maybe that last one is not so useful (though the accompanying chimichurri recipe looks good), but the recipes and cookbook recommendations help Man with a Pan multitask as entertainment, polemic, and a tool book.

On his blog, Stay at Stove Dad, Donohue documents his own efforts to feed his family, wife Sarah Schenck, filmmaker and co-founder of video-based family food website Parent Earth, and their two daughters. Planning home-cooked meals for the family is, as Donohue puts it, like a chess game. “You have to think many moves ahead. Will there be something in the fridge to eat that Wednesday night you have to work late?” he asks. “Good question, one that can only be answered Sunday afternoon when you have the time. I make sure there are pasta sauces, pots of cooked rice, containers of black beans, roasted chickens, and the like always on hand.” Donohue does most of the cooking, but Schenck is usually the one to pick up the children and serve them dinner, putting together the sauces and staples Donohue prepares in advance. With his wife on the front lines with two hungry kids the food had better be good–and it looks like it is.

After reading Man with a Pan, I’m starting to catch a new vision of home cooking, one that involves men exchanging recipes and strategies. In the 1983 film Mr. Mom, Michael Keaton’s character is a recently out-of-work auto industry exec who has switched places with his wife. She’s supporting the family now while he does the housework. At a job interview he enthusiastically exchanges cooking advice with another laid-off worker, a scene that plays like a joke. They’re so into it–ha! When do we ever see men get so passionate about home cooking? I’ll tell you when; here and now, in one-third of our kitchens. For a book about men, Man with a Pan has surprisingly little chest thumping and a glorious amount of pleasure, generosity, and joy.