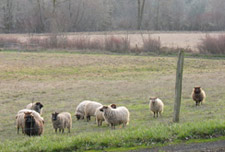 Tierra Vegetables farmer Lee James raises what she calls “the remnants of the oldest flock of Shetland sheep west of the Mississippi.” A small flock, around a dozen sheep, eats leftover produce and grazes her home acreage, but there are so few at this point that it’s hardly worth it to harvest their wool, she says.

“I keep them for the wool, but it doesn’t really pay for itself,” says James.  Most of the world’s wool is now produced in Australia, New Zealand, and China, so the infrastructure in the U.S. has all but disappeared. The cost of shearing the sheep amounts to more than Lee can get for the wool. “It’s not something you’d get into to make a lot of money, but it’s something I really enjoy,” says James.

James has her sheep sheared every spring; most weeks of the year shoppers can find raw wool and yarn at the Tierra booth at the Ferry Plaza Farmers Market in San Francisco, where it serves as a useful reminder that local agriculture does not stop at food. 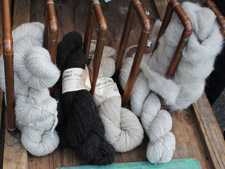 In addition to yarn, James has often brought in whole fleeces for people to look at and touch. “So many people pick up the yarn and say, ‘Oh, it smells like sheep!’ But they don’t know what sheep smell like,” says James in her signature dead-pan tone. “I don’t usually say anything, but it doesn’t smell like sheep; it smells like spinning oil. The fleeces, on the other hand…”

Do market shoppers tend to draw a connection between local farming and textiles? “A few of them do, yes. But not many,” says James.

If Rebecca Burgess has a say, all that’s about to change. “We see people who are eating food from the farmers markets and going to restaurants where they know the farms, but they’re wearing clothes that equate to eating meals at 7-11,” she observes.

Burgess has been involved in a variety of projects designed to cultivate awareness of locally made fibers and the clothing they become. The latest is a year-long challenge to create an all-local wardrobe called Fibershed (think “watershed” but based on fiber). Now, she’s expanding the project beyond her wardrobe to create a network with the same name made up of “weavers, dyers, farmers, engineers, thinkers, makers, and artisans” within 150 miles of her Marin home. 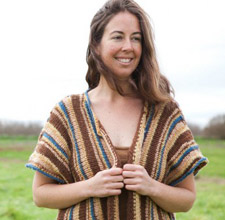 Why local clothing? In truth, the movement toward clothing made on a small scale from ecologically farmed fibers is not very different than the parallel efforts to build local food systems, just a little less developed.

For example, Burgess is working with one of the only small-scale organic cotton producers in the state of California*, Sally Fox, as well as local wool producers who take a sustainable approach. She’s also fundraising in the hopes of purchasing crucial equipment (the first goal is a new solar-powered mill; currently there is only one in the area.) that will allow the supply and demand for local clothing to grow and, ideally, incentivize more fiber producers.

“We’re not trying to mimic industrial production, but we are trying to find that scale halfway between hand-spinning your yarn and a football field-sized industrial spinning rack,” says Burgess. Not, in many ways, unlike artisan food production.

“I’d love to see the food movement incorporate the fiber movement, because, whether it’s what we put in our body or what we put on our bodies, all of it comes from the same soil.”

*When it comes to pesticide use, conventional cotton is considered the world’s “dirtiest” crop.