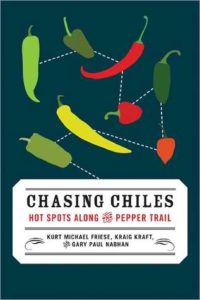 It’s like one of those bar jokes: An ethnobotonist, an agroecologist, and a chef walk into a chile field…but there isn’t a punch line because this book is about climate change.

Thankfully, the writers of the new book Chasing Chiles manage to keep despair at bay as they carry the reader along on a fascinating journey in their van, “The Spice Ship,” visiting pepper fields all over North America to seek out iconic regional peppers and the people who grow them.

The three authors, chef Kurt Michael Friese, agroecologist Kraig Kraft, and ethnobotonist Gary Paul Nabhan, set out in The Spice Ship to learn how climate change is affecting one particular crop (chiles) in a variety of different places (parts of Mexico, the Rio Grand, Avery Island, areas of the south, and the Midwest). They investigated and documented how farmers are adjusting their growing practices to changing conditions in their fields. Each of the three brings his own perspective and unique brand of inquisitiveness to the micro-subject of chiles, providing the reader with a kaleidoscopic lens through which to view the macro subject of climate change.

The writing has a natural immediacy that made me feel as if I were listening in on their conversations with farmers, cooks, and seed savers in Sonora, Mexico, Iowa, and points in between. Some of the scenes were physically upsetting. I literally felt sick to my stomach as the three chile wranglers approached an orchard in the desert of Sonora, Mexico. They’d set out to see how the indigenous chiltepin chiles were faring a month after a severe hurricane swept through the region, and found Oscar González, whose farm had been hit without warning by a deluge that filled his well and irrigation system with sand, ruined his tractor, washed away his farmhand’s house, his chickens, and his dog, and took out more than half of his fruit.

As farmers shared details of the variability in weather patterns they must deal with in deciding when and where to plant and which traits to select for in their heroic attempts to stay one step ahead of climate change, I was struck by their tenacity in fostering diversity in their fields. If readers take one thing away from this book it should be that genetic diversity is key to protecting our food supply in the face of climate change. Variable weather conditions produce more than wholesale destruction of crops; they also produce a variety of new and unpredictable crop-killing pests and diseases. Crop variety must match these threats.

You don’t need to be a science geek to love this book. Even in the face of the dire effects of climate change, the pleasure principal is alive and well throughout the narration. All three writers are enthusiastic eaters and experiencing the chiles through meals shared with farmers and cooks along the way not only left me with tons of respect for farmers, it made me yearn for the complex, chile infused foods they were eating. Luckily the book includes recipes for dishes like Yucatecan pollo pibil, Datil Pepper sauce, pilau and carne machaca con verduras de Sonora sprinkled throughout, courtesy of Friese.

I hope the gastronomic aspects of this book get more people to read it because it’s going to take more than disturbing data about storm severity, droughts, and changing bird migration patterns to get people to make the connection between climate change and their plates. You’ve got to hit them in the gut. Now excuse me while I go try out the recipe on page 98 for a fiery habañero condiment called xnipek.