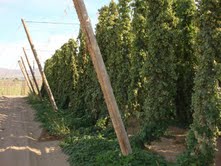 Some consumers may be surprised to hear that the organic beer they have been drinking isn’t necessarily made with organic hops. While not the major ingredient of the four components of beer—along with malt, yeast and water—hops are nonetheless crucial in creating it. By placing hops on the National List of “Allowed and Prohibited Substances” in 2007, the USDA approved the use of conventional hops in beer labeled organic, provided that the producer can prove that the organic version is unavailable. But this allowance is about to change. Beginning in 2013, all beer labeled organic must be made with organic hops.

Back in 2007, the placement of hops on the list was arguably warranted. Most organic hops were produced in New Zealand and Europe and many local varieties were unavailable in organic form. While some organic brewers stayed the course and sourced organically, others opted for local over organic ingredients. As organic hops were not required in organic beer, many U.S. growers found it hard to sell their organic product.

However, since 2007, the Pacific Northwest has arisen as a hub for growing organic hops, along with several smaller regions across the country. In recognition of this, hops were removed from the National List of Allowed and Prohibited Substances in October 2010, after extensive petitioning by the American Organic Hop Grower Association. As the organic brewing industry transitions to having to use all organic hops on January 1, 2013, a host of issues may arise, many due to a lack of clear communication between brewers and growers.

Conventional hops are purchased long before they are harvested; traditionally, breweries enter into contracts with hop growers lasting several years, committing to buying particular quantities and varieties of hops. Many growers hope that the organic hops industry will work the same way—under contract. But many brewers seem hesitant to commit and the industry is running out of time to meet the 2013 deadline. According to Daniel del Grande, owner and brewer of Bison Brewing, an organic brewery in Berkeley, planting decisions for hops used in beer brewed in 2013 must be made by August and September of this year, though the hops will not actually be planted until early spring of 2012.

Organic hops go for about twice the price of conventional hops, according to Jim Boyd, production manager at Roy Farms, one of the largest hops growing farms in the U.S. and likely the largest organic grower. Depending on the quantity and varieties used, the cost of hops can make up between 10 and 45 percent of the total cost of ingredients, with a typical brew coming in around 20 percent.

The price increase comes from the fact that growing organic hops is significantly more difficult. Pat Leavy, President of the American Organic Hop Grower Association, is on his 34th crop of hops and his fifth organic crop at the Oregon Hophouse in the Willamette Valley. “[Hops] are very attractive to insects…[and these] pests are more difficult to control than in other crops,” he said. In addition to the cost of added labor, crop yield is generally 50 percent or less than for a conventional crop, according to Boyd.

Growing organic hops is an especially risky venture without the assurance that someone will buy up the crop at harvest time. While Boyd agreed that in 2007 the placement of hops on the list was appropriate, he said availability has since changed. But growers have not seen a similar change in demand for their crops from brewers.

The lack of demand has made many growers hesitant to start or continue growing organically. Boyd notes that he has seen an increase in breweries willing to sign contracts, but not enough to supply all of the current breweries producing beers labeled organic. And once all of the current organic soil has been planted and contracted, breweries are also going to have to commit to buying the transitional crops, grown during the three-year period of turning land from conventional to organic.

Brad Carpenter of Carpenter Ranches is a sixth generation hop grower in Washington, who began farming organically in 2000. However, in 2006, they halted growing organic hops. “The market just wasn’t strong enough to support it,” he said. They began growing organically again in 2010, and recently expanded to five more acres. “Investments are very high and organic growing requires a steep learning curve,” he said. “You can’t just jump into it.” He believes that contracts are needed specifically in the organic hop industry as they “fuse together a partnership” between grower and brewer.

Some brewers have embraced both organic hops and contracting with open arms. Mike Kelly, brew master at Nelson Brewing Company in British Columbia who has contracted with Roy Farms and the Hophouse, said he “loves contracts because they ensure we get [our hops], versus the spot market, where they run out of what you want.”

Ted Vivatson from Eel River Brewing, the country’s first certified organic brewery and producer of many award-winning beers, has been using all organic hops since he started brewing organic. Sometimes, he said, this means opting out of making a particular style of beer or creating his own take on a traditional style. His English-style IPA sacrificed points at the judging table for not using traditional English hops. But that’s okay, he said, because that variety of hops was unavailable organically and he is an organic brewer.

As someone who started organic brewing when there were no organic hops available in the U.S., Vivatson said he opposed the change in law because he fears a sort of “power grab” over organic hops. While he says the change in 2013 will not affect him or his brewery, he is concerned that the well-intentioned small breweries will be forced out of the organic hops market, if some of the big players who are in the organics field for marketing purposes buy all of the available hops.

While most brewers acknowledge that contracting is necessary for the economic stability of the market, some also say it can come at the expense of creativity and flexibility. Dave McLean, owner and brewmaster of San Francisco’s Magnolia Pub, said, “We want space of innovation and don’t want to feel locked into using a certain amount of a certain variety of hops.” McLean looks to the day when the hops growing industry in the U.S. is less consolidated in the Pacific Northwest and is encouraged by the crops popping up in places like Modesto and Mendocino.

The issue of local versus organic is especially prevalent in the hop industry, as varieties grown are very dependent on the climate. Many hop varieties grown in New Zealand cannot be grown in the U.S., organically or conventionally, and vice versa, according to Boyd.

Meanwhile, Del Grande has created a Web site that he believes will help brewers source organic hops and communicate with growers. Launched this past March, the CoHOPerative” has about half a dozen breweries signed on. The site is based on pre–orders, allowing breweries to get together and collectively voice their needs. Demands for different varieties could then be communicated to growers in their full scale, ensuring that enough is grown for everyone.

The Brewers’ Association and its Pipeline Committee could also help facilitate communications between the two groups. This organization surveys brewers on what their needs are and passes the information on to growers.

Figuring out the optimal market for farmer and brewer exchange may yet be determined,  but one thing is for sure within the organic beer industry as a whole: it’s going to be become more organic.

Heather Hammel is a student in the politics department at Princeton University and the author of the food blog Soufflé Days. She is currently an intern at Seedling Projects and the Good Food Awards. Read more >