Big Ag Doesn’t Want You To Care About Pesticides 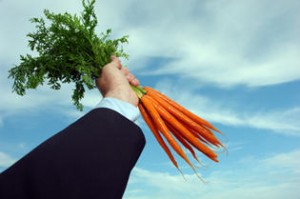 The produce lobby is livid that consumers might be concerned about pesticides. They are taking their fury out on the USDA for its annual report on pesticide use (via The Washington Post):

In a recent letter to Agriculture Secretary Tom Vilsack, 18 produce trade associations complained that the data have “been subject to misinterpretation by activists, which publicize their distorted findings through national media outlets in a way that is misleading for consumers and can be highly detrimental to the growers of these commodities.”

This report happens also to be the basis for the Environmental Working Group’s popular “Dirty Dozen” and “Clean Fifteen” lists of fruit and vegetables with the most and least pesticide residues. The produce lobbyists are pretty steamed about those, too:

“There are some organizations with agendas that do want to scare people away from fresh produce,” said Kathy Means, a vice president at the Produce Marketing Association, a major industry group. “We don’t want anyone eating unsafe foods, of course. But for those products that are grown legally and the science says [the pesticide] is safe, we don’t want people turning away.”

Never mind that many consumers want this information. As with labels for genetically modified food, the industry’s position is that ignorance leads to bliss (or at least profits!). The industry maintains that even the Dirty Dozen show pesticide residues beneath EPA limits, and to them, the letter of the law is what matters. Of course, if you believe that pesticides are more dangerous than government scientists are willing to admit then these limits are insufficient. Then there’s the whole concept of synergistic effects–combinations of several pesticides in small amounts can deliver a greater-than-the-sum-of-the-parts toxic punch.

As The Washington Post article observes, recent research showed that children exposed to higher levels of a once-common class of pesticides known as organophosphates displayed lower IQs, suggesting that “safe” levels of pesticides may not be safe at all. Organophosphate pesticides have also been linked to ADHD in kids. And research that came out last summer suggested that in families that eat conventional produce, pesticide levels in kids’ blood can spike beyond EPA limits during the height of fruit and vegetable seasons.

Indeed, I’d feel somewhat more sympathetic to the industry’s complaints about lists like the Dirty Dozen if not for the fact that they continue to fight tooth and nail the EPA’s attempts to regulate pesticides. In fact, there is a massive battle going on right now in Congress over this very subject. A legal case from the 1990s has led to a court order requiring EPA permits for pesticide application. This represents a major shift for farmers, who can pretty much apply pesticides as, when, and where they want. The question now is what the exact permitting process will be and how onerous it will be with the EPA set to establish a final rule by this fall. See this McClatchy article for a bit more detail on the issue.

The GOP–never a party to shrink from radical change or from heeling to the demands of agribusiness–is attempting to get around the whole problem by exempting pesticides entirely from the Clean Water Act. This, despite the fact that pesticide run-off is one of the largest water pollution issues we face. A bill to do just that–with a name designed to misdirect and obfuscate, The Reducing Regulatory Burdens Act of 2011, has already passed the House and could pass the Senate soon.

At the same time, the GOP also opposes reform to the woefully outdated Toxic Substances Control Act. The update, known as the Safe Chemicals Act of 2011, would require greater safety testing for the tens of thousands of industrial chemicals in use today, most of which were approved based on little or no data, and would move the burden to corporations to prove the safety of industrial chemicals. It would also tighten the EPA’s approach to risk assessment so that the potential for harm becomes more important.

So while the produce lobby is accusing food safety experts of “fearmongering” and crying crocodile tears over the fact that misplaced consumer “panic” over pesticides will lead people to avoid eating fresh fruits and vegetables, it’s worth noting that it doesn’t have to be this way. The produce lobby could support consumers’ desires (and dollars) and push farmers to adopt more aggressive tactics to reduce pesticide use. It is possible. There is a middle ground between annually dousing crops with millions of pounds of toxic chemicals and going totally organic. It’s called Integrated Pest Management, it’s (of course) more common in Europe than in the U.S. and there’s no reason why it can’t become the norm here. Oh wait. There is a reason. It’s our horribly corrupted political system. Right. Almost forgot.