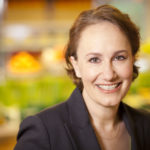 Helene York is both an educator and coach for Bon Appétit Management Company, the socially responsible food service company that operates more than 400 on-site cafés for universities, corporate employers, and museums in 31 states. She is also the director of the Bon Appétit Management Company Foundation, whose mission is to educate chefs and consumers about how their food choices affect the global environment and to catalyze changes in the supply chain.

Helene conceived and helped launch Bon Appétit’s Low Carbon Diet program in 2007. The goal of the program is twofold: To raise awareness of the connection between the food system and climate change and to reduce emissions associated with Bon Appétit’s food service operations by 25 percent over five years. To date, the program has achieved reductions by approximately five million pounds of CO2 equivalent emissions each month.

In 2010 she was named a Seafood Champion by Seafood Choices Alliance for her steadfast commitment to sustainable seafood on a global level. Since 2009 Helene has been a regular contributor to the Life channel of the Atlantic Monthly online and a frequent guest lecturer at universities across the country on the subject of the food system’s relationship to climate change.

Last summer we successfully challenged our chefs to sign up our 1,000th Farm to Fork vendor, representing tremendous growth since we launched this program way back in 1999—long before the word “locavore” had been coined, let alone become a buzzword. I’m really proud that we work with so many small, local, independently operated farms and artisans.

But we’re finding that the criteria we currently use to define “small” (under $5 million in sales) and “local” (within 150 miles of our cafés) can be limiting, especially when it comes to protein. I’ve found owner-operated, humane-certified chicken farms, for example, that have more than $5 million in sales per year but are featherweights compared to the Big Birds of poultry. Should they be excluded from our Farm to Fork program? Currently they are. So we’re looking at how we keep the integrity of the program if we were to widen the definition. I’m also examining what “local” means for fish. “Good Choice” albacore tuna might be landed in Portland, but if it was caught 1,000 miles out to sea, can Oregonians really call it a “locally caught” fish?

I see myself as supporting 500 chefs who are committed to making so-called “institutional food” taste great and be healthy. Some of them are responsible for feeding thousands of people every day. My job is to help them source foods as responsibly as possible and give them tools to push wherever they can. Lots of them have helped medium-size farmers and ranchers change their practices by nudging them toward a third-party certification of humane practices or reduced pesticide usage. It so makes my day to hear those stories of making change.

Food that is prized more and wasted less. Foodsheds that are regional in nature and not dependent on a few enormous global actors. Persuading some of the bigger players to make meaningful changes in their food production and distribution practices—to use radically fewer chemicals, treat their workers and animals well, keep nutrients in basic foods instead of injecting additives later, and use “natural” food waste to replenish the land rather than add to the landfill.

I’m reading an advance copy of Barry Estabrook’s Tomatoland about the absolutely insane Florida tomato industry. Insane from an environmental standpoint because the natural sandy soil can’t support growing commodity tomatoes in Florida and there’s so far to go to make the labor conditions there truly humane.

I’m also nearly done with Tom Standage’s A History of the World in Six Glasses (2005), a fascinating romp through millennia of beer, wine, tea, and cola drinking that shows humanity’s tendency to commodify foodstuffs and trade it globally. These aren’t new phenomena.

Everyone from prep cooks learning to use vegetable trimmings for stock and weigh their kitchen waste, to NGOs looking for business leadership to buy certain products or speak out in favor of a public policy, to suppliers of every stripe who claim environmental benefits of their “eco-friendly” products. I support the first two; I bust the third.

Personally, I don’t eat meat, even though I’m on the board of Humane Farm Animal Care and visit ranchers often who do a tremendous job. I respect what they do, but I feel very strongly about meat’s impact on climate change and its overuse of natural resources per calories delivered compared to other foods. Plus piglets are awfully darn adorable! It’s hard not to think about that when I think about food for a living.

Professionally—well, Bon Appétit has a very long list of commitments. In addition to the Farm to Fork Program we launched in 1999, we’ve addressed the overuse of antibiotics, sustainable seafood, cage-free eggs, the connection between food and climate change, and most recently, farmworkers’ rights. And we now source Fair Trade-certified baking chocolate for our kitchens. We’re the first food service company to do so.

It’s natural for me to think about chef goals and I’m so delighted when I hear them talk about how they changed their menus to reflect our Low Carbon Diet principles. This isn’t “my” project anymore. It’s theirs! They’re the ones making it happen on the ground every day. But my goal is to reach all the line cooks in the kitchens, like the ladies I met in Washington, DC, who are proud to be feeding healthy food to students, and taking those lessons home to their own kids and grandkids. I spent much of a week last year alongside cooks in one of our kitchens to know what it’s all about. When I think about initiatives, I think about reaching them.

Change means redefining lunch on a national scale. Sandwich options at most places are so limited: Turkey, grilled chicken, roast beef, or an under-cooked eggplant slice with red pepper, all of which hide under a block of factory-processed cheese, a tasteless pink tomato slice, and piece of wilted lettuce. Many ethnic options are similarly homogenous: How often do you see actual vegetables in a “veggie burrito” and why do burritos have to weigh a pound and a half, anyway? Change means caring enough to put these scenarios out of business, having responsible meat as optional toppings, a wide variety of fresh seasonal produce options, and reasonable quantities.

The supply chain for a big company does not change quickly. We spent two years creating the Low Carbon Diet and then established a five-year timeline starting from launch in 2007. Some goals were met early (we committed to reducing beef purchases by 25 percent in two years but hit a 33 percent reduction during that time) and others, like completely eliminating air-freighted seafood, have been hampered by a lack of transparency in our suppliers’ reporting systems. Every change effort requires buy-in from many people—chefs, managers, suppliers—and everyone’s busy. Our initiative isn’t their top priority that day; making lunch for 3,000 is. I’ve got to make sure that I express our goals in a way that anticipates their questions and needs and is reasonable. It’s also important to give everyone a sense that the project is part of a larger vision, connected to an idea bigger than all of us, and that we can help bring about through our individual actions.

We have worked closely with a number of independent organizations to guide our purchasing policies and renew our intellectual underpinnings for them over the years, including Environmental Defense Fund (EDF) and Institute for Agriculture and Trade Policy (IATP) for the antibiotics-reduction policies that guide our meat purchasing; Humane Society of the U.S. (HSUS) and Humane Farm Animal Care (HFAC) for our egg purchasing policy; The Monterey Bay Aquarium and Ocean Conservancy for seafood; Fair Trade USA for coffee, tea, bananas and a program under development; and Ecotrust on the Low Carbon Diet, among others.

The grass-roots movement around urban agriculture springing up in so many corners of the country. Preliminary academic research is showing that many small, diversified programs in inner cities are more environmentally efficient than many rural operations in terms of energy, water, and transportation use. They offer the added benefit of teaching a new generation of young consumers about seasonality, respect for farming, and that fresh-picked, unprocessed peas tastes a lot better than frozen peas.

I think we have to be vigilant and patient at the same time and despite how oxymoronic that sounds: Vigilant about pushing for progress, but patient because this is going to take a long time. The current food system took 150 years to develop, much of it with federal support: Railroad infrastructure and refrigerated box cars brought us uniform beef; aquaducts and canal systems brought us industrial agriculture; state-by-state approaches to regulating agriculture have given us a patchwork of environmental and labor laws that fail to protect workers, waterways, and soil in much of the country. We’ll achieve change if we focus on the big things and recognize that full-scale change can only happen in a generation at the earliest.

Every successful movement for change—the Civil Rights Movement is a great example—included many personalities and a variety of agendas, but the ultimate goals were few and clear—and took decades to realize success. Food activists ultimately need to rally around a few well-articulated priorities and reduce the fussing that will dissipate our collective strength. I liked Tom Philpott’s only half-joking proposal to form a Vegan/Omnivore Alliance Against Animal Factories. Michelle Obama’s campaign to combat childhood obesity is bringing together strange bedfellows behind an important cause, but many committed activists prefer to scorn the efforts because big business has signed on or it doesn’t go far enough. In my view, this a huge step right now in the right direction. We need to examine what our primary goals and our long-term “non-negotiables” should be so we can measure progress toward achieving them.