The Artisan Kitchen in Richmond: A Co-op Cooking Space 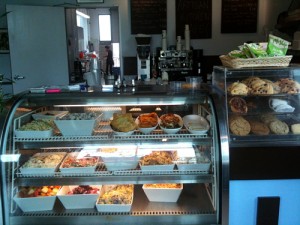 San Francisco has La Cocina‘s incubator kitchen, and street eats, underground food folk, and pop-up restaurant types work out of places like La Victoria Bakery, while thriving food enterprises such as Blue Chair Fruit have found a home in the kitchen that houses Grace Street Catering in Oakland.

Less well-known is a commercial kitchen work space in Richmond, which gets rave reviews from the emerging and established food companies who work their day and night. The Artisan Kitchen is currently home to two food truck businesses, a few baked goods companies that sell at local farmers’ markets and stores, including Guy Birenbaum the French pastry chef behind La Fleur De Lyon, and a gourmet popcorn producer.

Tenants, there are around 12-15 at any one time, say the cooperative kitchen space gets high marks for organization, cleanliness, design, layout, light, and equipment—as well as a communal vibe conducive to getting the job done.

The Artisan Kitchen is the brainchild of seasoned chef Liane Ingham, who says she’d worked in her share of substandard kitchens and wanted better for her brethren in the culinary community. “I love the energy and enthusiasm of start-up artisans who want to produce their own recipes and try something new they’re passionate about,” says Ingham, who opened the kitchen in 2009.

Six month after getting the kitchen up and running she opened a cafe out front because she couldn’t find anywhere in the surrounding community to buy healthy, fresh food. The cafe sells seasonal salads, sandwiches, and savory and sweet baked goods made from locally-sourced, organic ingredients, along with Peet’s Coffee. Early birds can swing by for free range eggs or oatmeal with blueberries for breakfast.

The Artisan Cafe is popular among local business and home-based workers, with its industrial-modern feel, communal tables, and outdoor seating. It’s a sunny spot in an otherwise nondescript Marina Bay office park.

Ingham runs her own catering company out of the kitchen and says it’s been a pleasure to do business in Richmond, with none of the bureaucratic hassles small food companies grumble about in, say, neighboring Berkeley. She notes that since she set up shop new food businesses, such as Galaxy Desserts, have moved in. Her business model (about 60 percent of her income comes from the kitchen, 40 percent from the cafe) has worked so well she’s looking to replicated it in Oakland later this year. 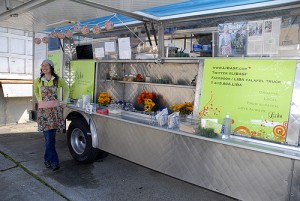 “Liane chooses the tenants carefully,” says Gail Lillian of Liba, who roams around the Bay Area in a lime green truck peddling her popular falafel. “We’re all small, boutique-y businesses who work well together and share a sense of integrity in our product.”

Some tenants find the location central, if business takes them between the East Bay and Marin, though that’s not the case for Lillian, who counts the extra 15 minutes of freeway driving as one of the few downsides of the location. Fellow food trucker Kate McEachern, of CupKates, adds that additional permits (since the kitchen is housed in Contra Costa County) is an extra inconvenience and expense, but both agree these are minor quibbles in the grand scheme of running a food business here.

Ancient Organics, which makes Ghee, called The Artisan Kitchen home for about three years, before moving to their own kitchen in West Berkeley recently. “Our company had grown to a size where we simply needed our own space designed for our needs,” explains Matteo Girard Maxon, who echoes other tenants when he says The Artisan Kitchen stood out when he and his partner were looking for a space. “But the level of professionalism at The Artisan Kitchen is special. Everyone is focused on building their business. We just outgrew it or we’d still be there.”

For the pair behind CC Made, who sell gourmet caramel popcorn, affordability was also a factor. “The Artisan Kitchen had a good price structure that was clear and concise,” says co-owner Cassandra Chen.  ”I had been to some kitchens and the pricing at most of these places was confusing and high.” Ingham charges either an hourly rate for a shared space or a set fee for your own station for producers who book a block of time each week. 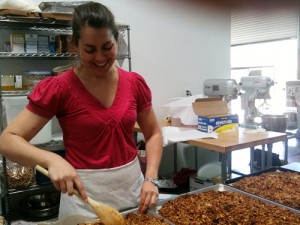 Adds newcomer and BAB contributor Megan Gordon of Marge Bakery: “the other folks are driven, inspiring entrepreneurs who I’ve already learned a lot from. It’s a nice community—not just a place to come and throw together some dough.”

Cupcake queen McEachern concurs. “Having other professionals in the kitchen was a huge help when I first started,” she says. “More experienced chefs can troubleshoot when things inevitably go wrong. Plus, even professionals need to borrow a cup of sugar from their neighbor occasionally.”

For owner Ingham the benefits go beyond business: “Even though the economy has been bad it’s a great feeling to have a place for artisans so they can create and fulfill their dreams—and make a good living doing so.”