The Antidote To Our Health Crisis Is Spinach | Civil Eats

The Antidote To Our Health Crisis Is Spinach 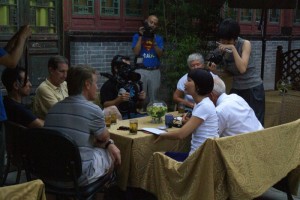 The documentary film Forks Over Knives starts in the middle of a health crisis. In a video montage, statistics on heart disease, obesity rates, prescription drug use, and the cost of healthcare are interspersed with sound bites from the likes of Bill Maher, who declares, “the answer is spinach!” While the tone is dark, Maher’s prelude stands for the hope within this film. Forks Over Knives compels us to consider that spinach is in fact an antidote to our disease of affluence. Award-winning documentary filmmaker and Forks Over Knives’ writer, director, and narrator Lee Fulkerson leads us on a sight-seeing tour through the American health crisis. At every turn we learn that processed foods and animal proteins are making us ill–and we learn that cooking and eating whole, plant-based foods can not only prevent these illnesses but often can even reverse them. Fulkerson consults with physicians Matthew Lederman, M.D. and Alona Pulde, M.D. to tackle his own health issues. Though in seemingly fair health, Fulkerson lives on Red Bull and shows a few warning signs of future heart issues. He undertakes the Lederman/Pulde treatment–a regimen of wholesome vegetarian cooking–and watches his waistline diminish, his energy surge, and his cardiovascular numbers improve.

Meanwhile, Fulkerson talks with another patient of Lederman and Pulde, as well as several other health experts and a diverse group of ordinary people who have changed their diets and radically changed their health as a result. Much of the film focuses on two researchers who, through the culmination of years of study, have each reached similar conclusions about nutrition. Dr. Caldwell B. Esselstyn, Jr. was a surgeon whose treatment of diseases led him to investigate how a vegan diet could prevent and reverse the disorders, especially coronary artery disease. For 20 years he subjected the patients in his study to a strict whole-foods, plant-based diet. Participants in this study talk about how the diet reversed the severe illnesses (heart disease, diabetes, cancer) they had faced.

The second researcher is Dr. T. Colin Campbell, a nutrition scientist and author of The China Study. His study of health and nutrition is touted as the most comprehensive study of health and nutrition in history. Campbell conducted a survey of lifestyle and diseases in rural China and Taiwan, searching for correlation between the two. The most significant finding is the association between animal-based foods and chronic illnesses. Campbell’s study doesn’t just pinpoint the usual suspects (cholesterol and saturated fats); he also concludes that animal proteins have a harmful effect on our health. The answer, again, is to adopt a whole-foods, plant-based diet. All the protein we need can be found through vegetables.

I think most nutritionists would agree with a whole-foods diet–certainly one that consists of mostly plants. But some health experts are skeptical of the conclusions Campbell reaches about the connection between animal protein and chronic illnesses. Denise Minger posted a thorough review of The China Study on her blog, as well as a more formal analysis and exchange with Campbell. Marion Nestle reports that “mainstream scientists find some of [Campbell’s] arguments credible (fruits and vegetables) but not his more extreme ones. The scientific arguments are complicated but nothing in nutrition and chronic disease ever boils down to one good or bad nutrient.” Throughout the film we hear people talk about taking control of their health and their lives. This leads me to wonder, has veganism become a belief system that enables people to feel like they can exert control over the capriciousness of life, disease, even death?

Striking a balance is a notion that nutritionist and frequent Civil Eats contributor Kristin Wartman discusses in her research on traditional cultures’ diets. With few exceptions, most cultures around the globe have lived on a diet that is 70 to 80 percent based on plant-based foods. She disagrees with Campbell’s ideas about the harmfulness of animal proteins: “we are talking about moderation–the amount of animal protein most Americans eat is not moderate!  A primarily plant-based diet with a moderate amount of good, clean animal products is ideal.” Esselstyn acknowledges that his recommended diet is an extreme one; but he adds that it’s in proportion to the extreme diseases Americans face. I wonder if Campbell and Esselstyn’s veganism is an extreme diet for extreme people–precisely because we no longer know what moderation looks like or how to live it.

The audience at the screening I attended was drawn largely from a university student group and, judging by the “blech!” noises I heard every time the stock footage of grilled meats appeared, it was a largely vegan audience at that. (Sorry, Fulkerson, for me those meat shots missed their mark and instead prompted Pavlovian drool as I recalled the smells of barbecue.) Given the emphasis on personal choices, with just a passing glance at how socioeconomic inequality affects access to healthful food, this is clearly a film for middle-income people in poor health but with the kinds of resources that will enable them to make radical changes in their diets–and stick with those changes.

But for every story of lifestyle change and disease reversal, there is also a story of enduring support, whether from physicians or, in the case of a Texas fireman on a “plant-strong diet,” from a small community. The film’s final scene–a tasty-looking pot luck held for the participants of Esselstyn’s study and Drs. Campbell, Lederman, Pulde’s patients–provides an uplifting ending. One hopes that the lessons of the film can truly impact people from all communities and economic backgrounds. For that to happen, we must strike a balance between personal success stories and compelling research, and universal access to healthy resources for all.