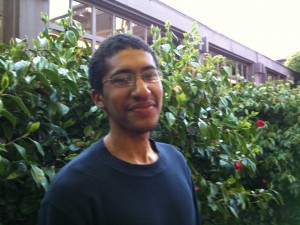 James Berk is a serious young man of few words. But when he speaks people take notice. And it’s not just because of his radio-ready baritone.  When asked why he got into the grocery business he says simply: “The food I was eating was killing me, and it’s killing my community. I wanted access to better food for myself and the people in my neighborhood.”

As a young teen, Berk’s diet largely consisted of Hot Pockets, Hungry Man dinners, soda and the “O”s (Fritos, Doritos, Cheetos, and microwavable burritos, sometimes with Cheetos stuffed inside). He knew his eating habits weren’t healthy, but the West Oakland child of a low-income single mom found food where and when he could.

Fresh fruits and vegetables were hard to come by in the neighborhood where he grew up, a mostly black and Latino community of 25,000 residents. The nearest full-service grocery was an hour’s walk away. Like many other so-called food deserts across the country, the area is filled with liquor and corner stores selling cheap, fast food. In his mid-teens Berk started to have health problems—heart pain, dizziness, and overwhelming fatigue—and knew his diet (including hunger) was likely a factor. He knew poor eating was also the cause of the overwhelming rates of heart disease, obesity, and diabetes in his community.

So in 2007 when health advocate Dana Harvey came to his school recruiting youth to work on community issues, Berk, then 16, jumped at the opportunity. He and other teens undertook a survey of the community, but Berk didn’t need to collect data from his neighbors to know one of the biggest challenges in his West Oakland neighborhood: Access to real, affordable food.

Fast forward a few years and at 20, Berk is the youngest owner-worker at Mandela Foods Cooperative (a program of Mandela Marketplace) a full-service grocery store and nutrition education center in West Oakland, a community long overlooked by supermarket chains.

The co-op, which opened in June 2009, is a 2,500 square foot store centrally located across the street from the West Oakland BART stop. It sells fresh, organic, and conventional produce from small farmers and bulk goods along with carefully curated packaged foods. The store also sells ready-to-eat meals prepared in-house. It serves low-income, longtime local residents–mostly people of color–as well as a new wave of artists, urbanites, and commuters of varying hues and economics.

Signs dotted throughout the produce section inform shoppers about the small group of mostly minority growers from local farms that Mandela works with to stock its shelves. The store is a clearinghouse for flyers from like-minded food justice organizations in the area. Recipes and nutrition information pamphlets are easy to come by. It’s clear that the co-op owners realize that education is as big a part of their job as stocking the shelves with good food.

Not content to simply peddle produce to the people who walk through the co-ops doors, Berk and a crew of young ones bring produce to the people, delivering food to corner stores via bikes with trailers through a partnership between West Oakland Youth Standing Empowered and the Healthy Neighborhood Stores Alliance, whose goals include getting nutritious food and positive businesses practices into convenience stores.

Two local grocery owners at Bottles Liquor and Millennium Market piloted this effort and display fruits and veggies prominently in their stores. The program has been welcomed by residents. Last year more than 4,000 pounds of produce was delivered to the two shops. “We figured it was easier to bring apples to an existing convenience store and make it available to people than to open another cooperative,” says Berk.

Berk is a young black male business success story, (he was recently honored for his work with the Robert Redford Center’s The Art of Activism award) in a neighborhood where few African American youth receive recognition for their community efforts. And he’s done it through sheer hard work. He dropped out of school and never obtained a high school diploma. When this reporter, scouting for a background for a photo dismissed a building as feeling “too much like a university,” Berk deadpanned: “I wouldn’t know.”

Now a commuter himself (a girlfriend in San Bruno means he catches the train to work) he credits his job for keeping him closely connected to his community. Since he is self taught and has had to learn a slew of challenging tasks to run a business with scant training and even less experience, Berk believes in empowering people to take responsibility for their own lives and make decisions based on informed choices.

“I didn’t start doing this work to be an activist, I did it because I wanted to make good food available in my community,” says Berk, who seems wise beyond his years. “Rather than wait for someone else to do it, sometimes if you want to make change, you just have to step up and do it yourself. But know that you don’t have to do it alone,” he adds. “There’s real power in community. The Mandela Foods Cooperative is daily proof of that fact.”