Elitism is Dead: The New Debate for the Good Food Movement | Civil Eats

Elitism is Dead: The New Debate for the Good Food Movement 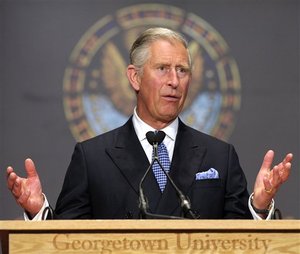 On Wednesday, Agriculture Secretary Tom Vilsack, farmer, poet and food movement hero Wendell Berry, physicist and seed-saving advocate Vandana Shiva, nutritionist and professor Marion Nestle, and His Royal Highness the Prince of Wales were among the speakers at The Future of Food, a conference put on by the Washington Post at Georgetown University.

The media was quick to focus on the comments by Prince Charles, who has been farming land on his Highgrove Estate for 26 years and selling produce under the name Duchy Originals, the profits of which are given to charities. But though the Prince gave a thorough and informed 45-minute speech about soil loss, the importance of biodiversity, and a critique of U.S. agriculture policy (you can read the whole speech here), some media and online comments focused on the perceived hypocrisy of the Prince as an environmentalist with a huge carbon footprint, and the old fall-back of detractors of the food movement: Elitism.

Chris Clayton, agriculture editor for The Progressive Farmer, tweeted “You just don’t make your case of what is needed in ag by tweeting “HRH Charles… His Royal Highness says. #FoF definitely #foodelitism”

Phillip Brasher, agriculture reporter for the Des Moines Register, didn’t use the word elitist, but used hyperbole to imply it. The title of his article: “Prince Charles: Save the world with organic farming.”

Elitism has been one of the hardest critiques for the good food movement to shake. For the last 50 years, conservative politicians have gained currency by slamming their opponents as elitist, pointy-headed liberals, and “nattering nabobs of negativism.” And food, which is often viewed as a liberal cause–even though conservatives are some of its biggest supporters–has become the latest hotbed for this fight (See Cookiegate). Making things more difficult, food is personal, habitual, and even addictive, and Americans are willing to cling to cheap food despite clear and present assessments about its toll on our health, our national deficit, and effects on our air and water.

Eric Schlosser, an investigative reporter and author of Fast Food Nation, among other books, kicked off the Future of Food event by saying:

Today, the chemical companies and the biotech companies like to dismiss organic food as something trendy or elitist. Well you know who needs organic food more than anyone else? …the two million farm workers who pick by hand almost all of the fresh fruits and vegetables in the United States. And their children need organic food, too. For them, the need for organics …is literally a matter of life and death. Pesticides are poisons. They have been carefully designed to kill insects, weeds, funguses and rodents. But they can also kill human beings. The Environmental Protection Agency has estimated that every year, 10,000-20,000 farmworkers in the United States suffer acute pesticide poisoning on the job, and that is probably a great understatement.

Though representatives from General Mills, Panera Bread, and the Grocery Manufacturers Association sat on panels, The Future of Food did bring together many known critics of the current food system. But the question is not whether the system should change, but how.

In fact, saying the system has to change should not be controversial. While the Farm Bureau and industry groups are preparing a PR campaign to change the consumer’s mind about industrial agriculture, it has become obvious that change must happen even at big corporations like Monsanto, Mars (which sponsored the event), and Walmart, which are all constantly trying to associate their image with sustainability. Meanwhile the price of oil is rising, the world water supply is becoming more tenuous, and extreme weather conditions and biofuel production contribute to food price spikes, all of which is leading to system collapse. Letting industry defend the current food system is akin to letting climate change deniers have a seat at the table while the science has long been settled.

Moreover, the two sides in this discussion are not equals. One is supported by an army of lobbyists and lawyers who shape legislation and feed talking points to the media. The other is an upstart with popular support based on overwhelming evidence that the system we have now is broken.

Just last week we saw what happens when you give too many industry spokespeople the stage at a similar event, put on by The Atlantic magazine. That event was sponsored by DuPont, Dole, Coca-Cola, and the Council for Biotechnology Information, a group funded by the industry. Each got to place staffers on the panels in return for funding. What resulted was a biased panel on “sustainable agriculture” that focused heavily on one thing: biotechnology. It also featured a panel on obesity, during which a Dole staffer and an American Beverage Association spokesperson marginalized the debate to focus on things like soda can sizes. Dr. Zeke Emmanuel, Chair of the Clinical Center Department of Bioethics at the National Institutes of Health, struggled to move the conversation toward discussing deeper solutions to the problem.

While bloggers lamented these biases, and asked whether or not this was what it takes to stay afloat as an independent magazine publisher, The Atlantic event was not a complete loss. White House chef and policy adviser Sam Kass spoke. The event also featured Alice Waters, who tweeted before taking the stage that, “The true elitism is a food system controlled by a handful of corporations,” and sent out a photo of the refreshments table, which featured bottles of Coke.

The Future of Food event instead featured a delicious lunch prepared by Bon Appétit Management Company, a locally-sourced and organic-committed caterer. But aside from the food served, the main critique I have of both of these events is their lack of deep, meaningful debate. For The Atlantic event, the debate was stunted by industry, for The Future of Food, there were too many people on each panel and a lack of time and direction by some of the moderators. And both events lacked diversity and youth voices. The Future of Food took place on a college campus, and yet the students who showed up didn’t stay after Prince Charles spoke. Indeed, the event could have been better publicized if the goal was to engage students on Georgetown’s campus.

If we are going to sit together in a room and discuss the finer points of food policy, we need to have real, solid debates and solutions. It’s time we get down to brass tacks about genetically modified foods, antibiotics in livestock agriculture, health concerns surrounding pesticide use, and other subjects, featuring scientists and those unassociated with industry. We need to talk about the barriers to producing research when it is missing, the consolidation in the industry and how this effects choices, and bring more farmers into these discussions to speak for themselves.

Otherwise, we should be rolling up our sleeves to build new models for food access. Dr. Hans Herren, a scientist and lead author of the IAASTD report, who was on a panel about international food policy, said it succinctly when he pointed out that we need to stop talking and writing reports and do something. “The time to act was yesterday,” he said.

Writing new policies will also help put to bed the tired old argument of whether or not organic vegetables are elitist. “Smart sustainable food policy is common sense,” said Senator Jon Tester in the closing keynote at The Future of Food. “And if you fight for it, you can win.”

In the end, calling those who want to change the food system elitist is merely a way of diverting our attention from the very real problems we face. In an opinion piece last week, Eric Schlosser wrote:

This name-calling is a form of misdirection, an attempt to evade a serious debate about U.S. agricultural policies. And it gets the elitism charge precisely backward. America’s current system of food production—overly centralized and industrialized, overly controlled by a handful of companies, overly reliant on monocultures, pesticides, chemical fertilizers, chemical additives, genetically modified organisms, factory farms, government subsidies and fossil fuels—is profoundly undemocratic. It is one more sign of how the few now rule the many. And it’s inflicting tremendous harm on American farmers, workers and consumers.